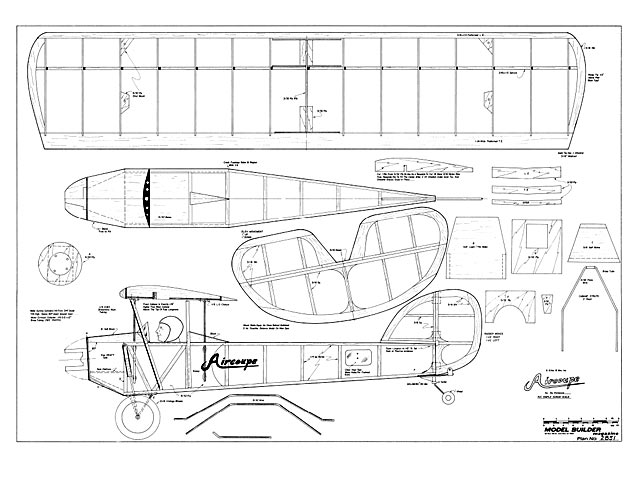 CENTERFOLDS, OH HOW I LOVE CENTERFOLDS! Every month I read most of the American model magazines, plus Modelar from Czechoslovakia, Airborne from Australia, two magazines from Britain, and from other countries like France and Poland, I frequently see several issues each year.

BUT IT'S THE CENTERFOLD IN Model Builder that has been my 'turn on' for many years. Each month I grab Model Builder and lay it out flat to its centerfold and study the lines, curves, and the beauty of what I see, and I start to fantasize! All the 10c kits of Megow, Peerless, and Comet have been pinned to my building board in years gone by - maybe the MB centerfolds draw me back to my youth. I wonder if I could still make a gum band model fly, would I remember how to trim it, would it be a waste of time, would the guys laugh at me?

When MB's August 84 issue arrived and the centerfold presented Walt Mooney's Peanut Scale version of the Elias Aircoupe (oz1195), ecstacy had arrived - the 'turn on' was immediate. I had to build that cute little parasol. So here we present, nearly stick-for-stick and strut-for-strut, a wonderful flying R/C version of Walt Mooney's PEANUT that is simply a buncha fun to build and fly. It is super-stable for every-day, Sunday R/C flying.

Editor's Note: Unbeknownst to Stu, his Air-coupe project almost hit right on the button an idea that Model Builder and Roland Boucher of Leisure Electronics have been kicking around for the past few months - electric powered R/C Peanuts, scaled up four times! Although our idea would normally produce scale models with a wingspan not over 52 inches, there may be no reason that they can't be less. Watch for a design-and-fly contest along these lines in the near future. Meanwhile, we'll experiment with photographic blow-up reproduction of some of our more interesting published Peanut designs.

The real Aircoupe used the Curtis Challenger engine that was so successful in the Curtis-built airplanes. It was an ideal power plant, had two banks of three cylinders each, and a shaft with dual cranks. The engine was built from about 1928 to 1935, and preceded dual ignition systems. The exhaust collector ring served all six cylinders in staggered succession.

Our simple SUNDAY SCALE version was planned for a bit over 400 square inches of wing area and three pounds with three-channel radio gear and a trusty OS .15R/C engine. Any .15 to .20 engine should be suitable - and an HP .21 four-stroke COULD BE PERFECTION! The plans show all needed data.

The Williams Bros pilot and wheels really add a touch of class. You may have to lie to your wife a bit about the wheels. I told my wife they only cost $1.85 a pair - hawwwwwww. Fun is where we find it.

I wasn't satisfied with the 4:1 wing aspect ratio for flight dynamics (what words), so the aspect ratio is 4.75:1 and the wings are both carrying 3/16 washout as measured at the wing tips' trailing edges. Leave out the washout and you're liable to have a model that flies like a 'bag of worms' - be so warned! USE THE WASHOUT.

Also be sure the rear of the top longerons taper at the stab mount to yield positive incidence at the stab EXACTLY as shown on your plans. The cabane strut mounting may look questionable, but it works and is easy to set to the plans' dimensions. Five degrees downthrust is needed, and we added ONE washer of right thrust after the first flights and we now track straight under full power as well as in the glide. The radio system was mounted as far forward as possible and our prototype balances RIGHT at the wing spar - and flies without any added weight. We DID have one wing heavier than the other, critically poor for such a low aspect ratio wing. It was corrected before the wing was covered. The finished model, when suspended at the wing spar, should balance with the top fuselage longeron EXACTLY horizontal - feel free to move the wing forward or back on the cabane struts to achieve this balance. Twist in the wing's washout at each tip with your heat gun and make the four wing struts to fit. The prototype's wing is mounted to the cabanes with 2-56 x 1/4-inch bolts into blind mounting nuts, but we have yet to remove the wing due to the compact overall size of the model.

Set your control surfaces to move as shown on the plans and you'll have sufficient control for Sunday flying as well as loops, barrel rolls, Immelmans, spins, and YOU'LL EVEN BE ABLE TO FLY THIS LITTLE JEWEL INVERTED THE FULL LENGTH OF YOUR RUNWAY. You'll need about a third of the 'down' elevator. Left and right rudder will steer it left and right while inverted.

Flying the AIRCOUPE inverted is a little bit like holding a toothpick vertically - then balancing a king-size BOWLING BALL on TOP of the toothpick's upper tip! It gets a little unsteady inverted, but it's fun. Just leave yourself enough altitude to pull 'up' elevator to recover from inverted flight.

The wing is thick enough near its spar to add a fourth servo for ailerons. We opted NOT to use ailerons and we're delighted with the AIRCOUPE'S performance with only three channels. We think you'll be pleased too. Make believe you're sitting in the real AIRCOUPE, hold full 'up' elevator and advance your throttle. As speed builds, ease off the elevator and steer down the runway. A touch of back pressure will lift you off. Touch-and-go's are a real delight. Hold a bit of back pressure on the stick as she sets down and rolls, to prevent a nose-over, advance the throttle and build airspeed. Steer down the runway's center and ease back slightly and you're back in the air. NEAT, HUH???

So why not send $5.00 to Model Builder Plans Service, Box 10335, Costa Mesa, California 92627-0132 and order plan No.2851 so you can build your own AIRCOUPE! If enough model builders like this simple Sunday type of scale R/C model and go ahead and buy the AIRCOUPE plans...this will tell the editor that you want to see more simple Sunday scale R/C models presented in Model Builder magazine!" 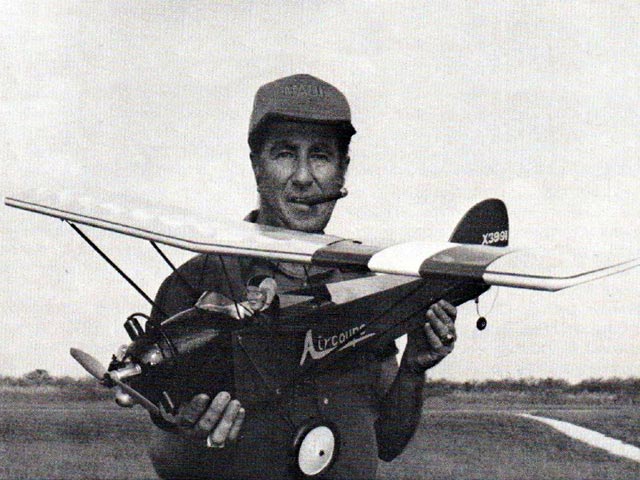