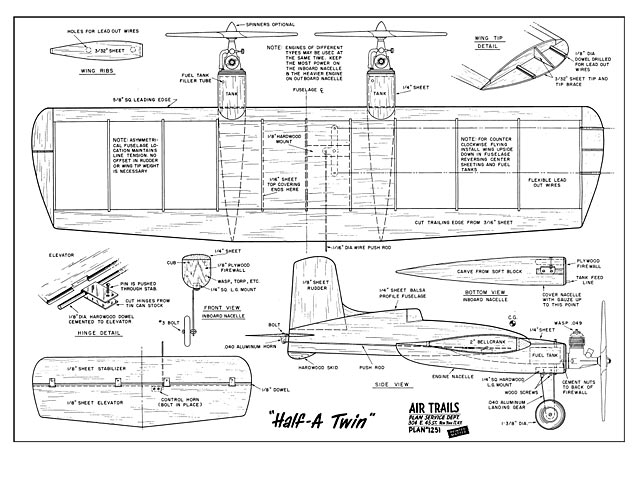 Quote: "It can be said that at one time or another almost every modeler has had the urge to build and fly a twin engine job - for 'twins' are really different, fun to operate and draw attention the way honey draws flies. For most this desire has never been fulfilled, due to several good reasons; one main one: twin engine operation has been considered expensive, complicated by gadgets and usually involved a complex model if it were to be attractive.

Nevertheless, the desire for one is still there. The Half-A Twin is believed to be the model that will allow even the most skeptical die-hard to realize said desire. With this design, we have tried to incorporate the answer to all the objectionable problems which have been present.

The answer to the expense problem comes with the use of Half-A engines. Most of us have one or two on hand anyhow, and with the Twin they do not necessarily have to be of the same make or power, allowing even more leeway in powering it. The use of Half-A engines also solves the operation problem as these small jobs are noted for their easy starting and consistent running ability in the air.

In flying the model, it has been noted that you can hardly tell the difference between the effort required to operate the two engines and that required for single engine jobs. Then, too, the performance in the air has been really remarkable; no instance can be remembered when one engine failed without reason. It almost seems that if one engine is operating well it will pull the other through if you should happen to have a false setting!"

Quote: "Here is the Half a Twin from Air Trails issue 12-51. This is a cleaned-up ,full size, plan scan from the treasure chest. Nice and small, both file size and model size".

Thanks to Fernando for help and the model pic. 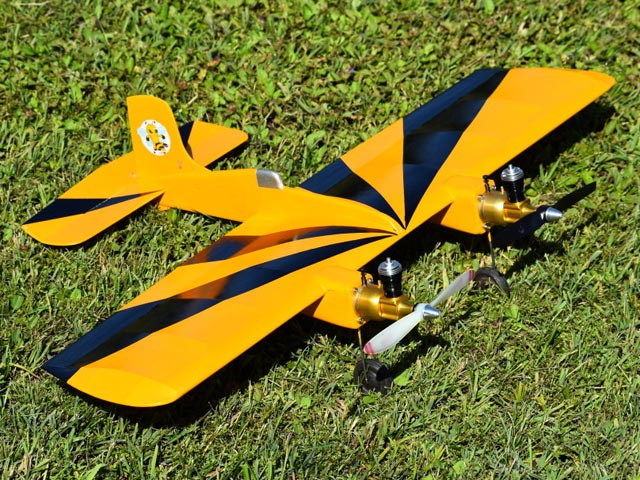