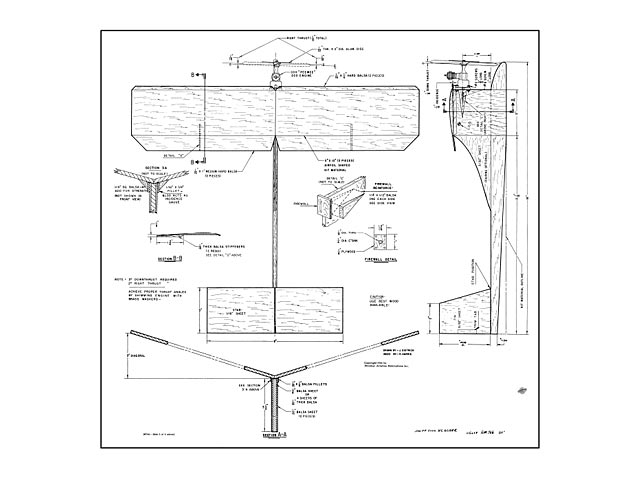 Quote: "Fun for young and old alike, this quickie conversion of a Jetco hand-launched glider to .01 or .02 sized engines is a versatile small-field flier. And inexpensive. One-Day Wonder, by Jack Dietrich.

This is one of those build-it and fly-it same day models, made possible by using a popular stock hand-launch glider kit put out by Jetco called the Thermic B. The big advantage in using this kit for your material is the pre-shaped airfoil wing panels. This helps speed up things considerably. Other design considerations were ultra-simplicity, compact size - 20 in wing span, rugged all-balsa construction with a built-in 'engine-protector' achieved by extending the nose beyond the propeller. You can literally hit a brick wall with this model and the engine won't get scratched.

The model also was designed for maximum stability and best performance possible with this type craft, realizing, of course, the limitations imposed upon it by its small size. So it is strictly a fly-for-fun model, with little chance of your losing it in a thermal, even on the hottest day.

I've tried flights with a full tank, where, at the end of the climb, the model was a speck in the sky, yet I've never had trouble retrieving it after a short chase. This is due primarily to the braking effect of the aluminum disc on the front of the propeller. Incidentally, the disc should always be used with the .020-size engine or the model will be too hot to handle!

The Cox .010 was used on this model without the disc and it worked very well. Of course, the glide becomes much better and your chances of an OOS (out-of-sight) flight become much greater. However, in the interest of economy and just plain enjoyment, I recommend the Cox Pee Wee .020.

This is also a good step-up model for the younger chap who has built and flown hand-launch gliders and now is ready for gas power. I would like to deviate a little here and say a few words to the Junior: Build and fly hand-launch gliders.

The rewards, in proportion to the time and money expended are great! I say this not only from my own experience in years gone by, but more recently from watching my son Bob who won a first place in this event at the Eastern States Championships last year. He won primarily because he had the only out-of-sight flight in the Junior event, which indicates a lack of competition, because the weather conditions were excellent. The young modeler should build those hand-launch gilders and enter those contests! It's a lot of fun. The hand-launch glider closely resembles our modern full-size jet aircraft of today - especially if you hang a small Jetex engine on one. Try it sometime and you'll be agreeably surprised.

To describe construction of my model a few tips will help. The only wood you will need, aside from the kit material, is a sheet of 1/16 x 3 x 36 inch balsa. This is for the pylon, and wing leading and trailing edges, which give the effect of slots, ailerons and wing flaps. The angle with which these parts are assembled to the wing is very important, and must be according to the drawing - which shows a continuous, smooth airfoil contour. The stiffeners will help to preserve this contour and should be installed as shown. What we're striving for here is an undercambered bird-like airfoil..." 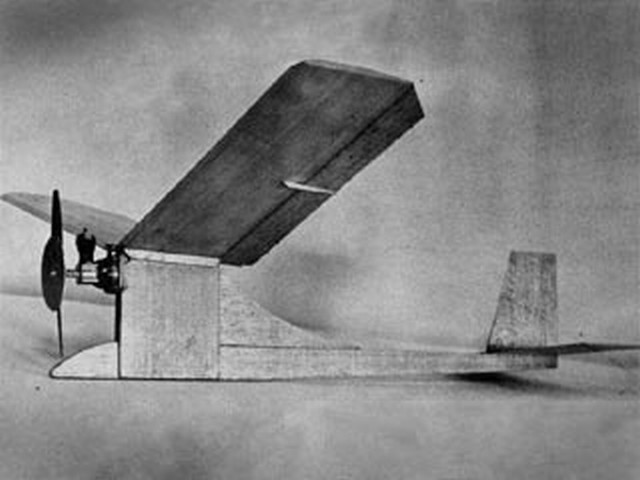