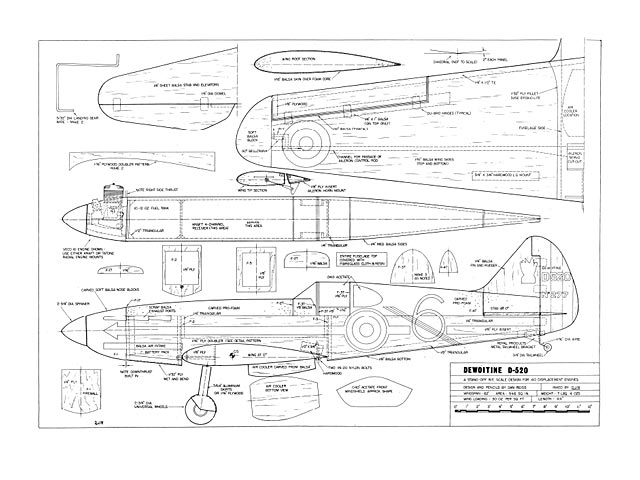 With our radios becoming more reliable every year, R/C'ers are putting more time into their models than ever before. I've seen sport and pattern ships with finishes and cockpit detail to rival those on the U/C ships during the 50's. Another result is the appearance of numerous Scale planes equally attractive. However, with the number of Scale kits available being so limited, repetition is beginning to set in with the models showing up. The alternative? Don't shell out all that money for those kits! Build something original and from scratch.

An excellent choice is this Dewoitine 520, a French built fighter designed and built just prior to World War II. The 520's main adversary was the German Me-109E and although they were comparable in performance, the French surrender relegated their fine craft to almost oblivion. Luckily for me, I saw Profile No. 135 which details this plane very well. It's a natural for Stand-Off scale. With simple and straight lines, only a few minor changes were required to make this plane approach the performance of a sport ship. The construction is easy and strong and if you've built and flown a Kaos, you can handle this one.

Wing Assembly. Start with the wing first. Cut out the foam cores with the indicated templates. Glue on the 1/4 x1/2 inch trailing edge and sand it to shape. Cut out the recess for the 1/4 in balsa hinge support and cement it in, making sure that it's level with the top of the wing. Install the aileron pushrod and bellcrank with the bellcrank at the wing tip as shown on the plans. Placing the bellcrank out there, your wing sheeting and bellcrank alignment procedure will be much easier.

Sheet the wing with 1/16 balsa. Cut a small slot where the pushrod to the aileron will protrude from the wing skin at the bellcrank. Line up that small pushrod with it mounted in the aileron control horn and put a Z bend in it at the bellcrank. You can hold the control horn on the aileron at it's proper location with your hand while you're doing this. Using that Z bend and small slot you should be able to get the pushrod into the bellcrank to check out the job you did. When you're satisfied with the alignment remove it and place it aside until you're practically done with the airplane. Don't worry. You'll always have access to the bellcrank and yet have the pushrod out of the way. Glue on the wing tip blocks and sand them to shape.

Cut out the ailerons and sheet all the exposed edges with 1/16 inch sheet balsa. Check the ailerons for a proper fit, sanding them wherever necessary. Slice out the recess for the 1/8 plywood aileron horn mount and epoxy it in place. Make a groove along the chord line at the root of each wing panel where the 1/4 in diameter wing dowel will go, then epoxy the wing halves together, leaving this groove as clear as possible..." 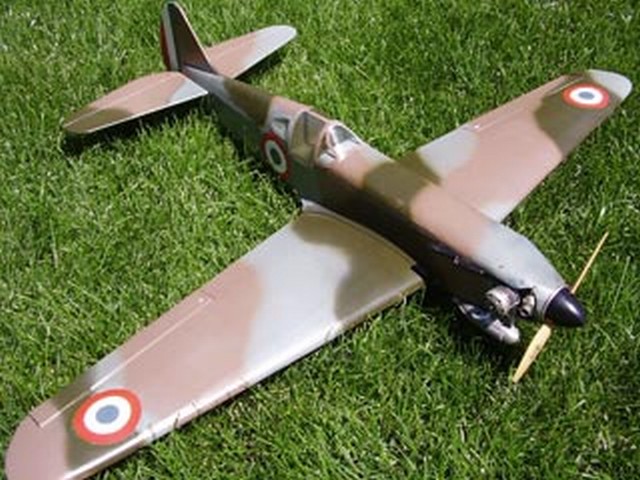 Thanks for what you do. Here are some photos of the Dewoitine D520 that I built from your plans. The plans print nicely with good clear lines. I cut out the foam wing cores using the plan root templates. Covering is 21st Century fabric, airbrushed with Tamiya paint. It was then sprayed with satin polyurethane to fuel prof. Power is a rebuilt K&B .61 ringed with a CB spinner and an 11x8 Zinger prop. It is a smooth flier and is surprisingly fast with the K&B. I believe that the speed is attributed to the high aspect ratio wing.
MiltOchsner - 19/05/2015
I forgot to mention that the formers are complete. There are no formers aft of f-3.
MiltOchsner - 20/05/2015
The article for this model can be found here: http://www.rcuniverse.com/forum/rc-warbirds-warplanes-200/11613424-rare-ww2-fighter-2.html
MiltOchsner - 25/09/2015
Add a comment