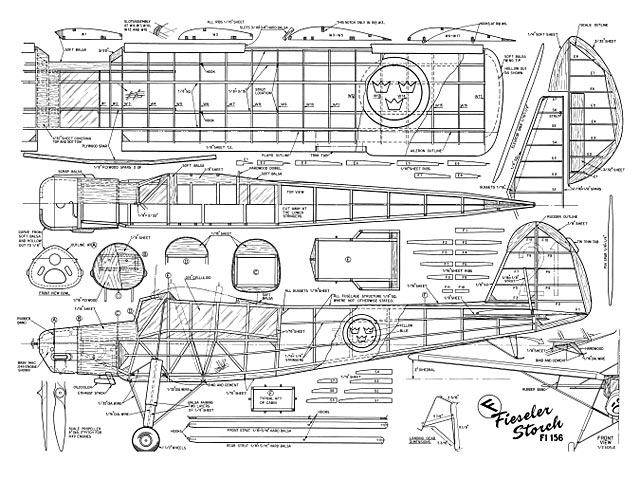 The Fieseler Fi 156 Storch was developed before the war by the Gerhard Fieseler Werke SMBH of Kassel, Germany. It was designed specifically for slow-speed flight and for take-off from and landing in restricted areas. The Fi 156 was exclusively used throughout the war on various duties, as a staff transport plane, for short-range reconnaissance and army cooperation, and as an ambulance.

The Storch had a welded steel tube fuselage, and wing and tail unit of wooden construction. The landing gear was the split type with long-stroke shock absorbers. The powerplant was one 240 hp Argus AS 10C inverted V8. Some models had a single machine gun mounted on top of the fuselage at the rear of the cabin. Span was 46 ft 9 in and the length 32 ft 6 in; loaded weight was 2920 lbs. Maximum speed at sea level was 109 mph, landing speed was 32 mph. The Storchs used in the Swedish Air Force were unarmed and mostly for reconnaissance and army cooperation duties of various kinds.

This model is of the 'English School,' fairly heavy and possibly a trifle under-powered, but it gives very steady and scale-like flying with an .049. Before you start the building, trace and reverse the fuselage sides, wing and stabilizer halves.

Begin construction by making two fuselage sides of 1/8 sq hard balsa, one on the plan, the other on the tracing. When the sides have dried thoroughly, remove them from the plans and add all cross-pieces starting at the cabin. Cut out all formers and glue former (B) together from balsa and plywood. Cement the formers and the 1/16 sheet at the rear of cabin to the fuselage at their proper places. Cement the stringers on the fuselage sides. Cut the keel from 1/16 sheet and ce-ment in place at the fuselage bottom, then fill out with triangular pieces as shown at (E). Solder the engine mounting nuts to a strip of brass, then cement or sew to the rear side of (B).

Cover the nose section with strips of 1/16 sheet. Cement the windshield frames and their gussets in place. Assemble the tailskid and cement in place, using the cement liberally. Cement the strip of 1/16 sheet in place on the top of the rear end of fuselage. Build up the cowl from soft balsa, carve, then glue the bottom half to (B)..." 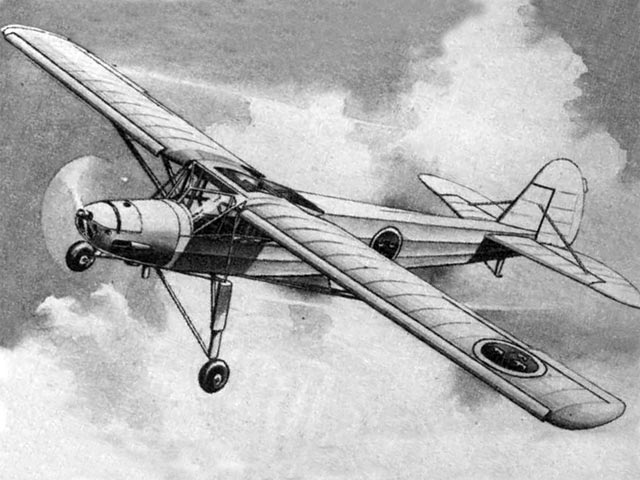