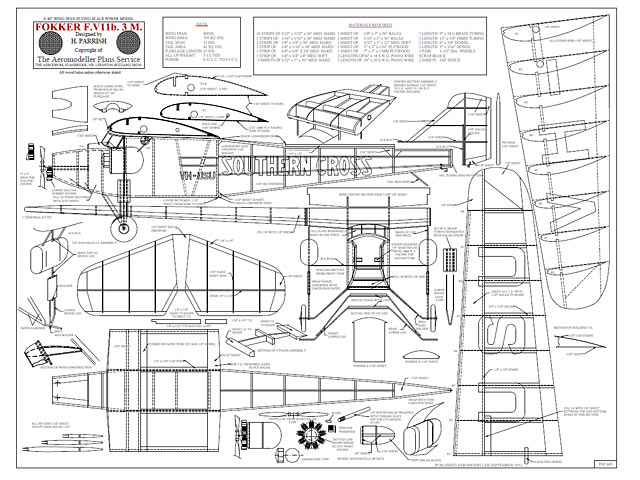 Quote: "THE period of such machines as the Fokker and the Ford tri-motors seemed to me to be one of the most fascinating in aviation history. These types of machines have an abundancy of that elusive quality - character, and I thought a tri-motor would be rather novel, the Fokker having a special appeal.

The 'Southern Cross' has rather an interesting history in that it was a hybrid. It was originally built as a Fokker F.VII by the Fokker Company in America, and following a crash in Alaska in which its wing was badly wrecked, the wing of an FX was bolted to the original fuselage and hence the F.VIIb 3M. She was bought for £3,000 without motors or instruments by Sir Charles Kingsford Smith and CPT Ulm, from Sir Hubert George Wilkins, the explorer.

After setting up an endurance record for multi-engined aircraft, Smith & Ulm established the record flight of 7,938 miles across the Pacific Ocean in three stages, flying from Oakland, California to Brisbane in Australia from May 31st to June 9th, 1928. The 3,144 miles stage from Hawaii to Suva Fiji, was the longest over-water flight made to that date.

Southern Cross was retired in 1935 and given a permanent home in the Canberra National Museum, but recently she was renovated and flown in the making of the film 'Southern Cross'.

During its career several mods were made, including the redesigning of the rudder and later, the enlargement of the cabin. Its colour scheme was dark blue fuselage and
rudder with silver wings and elevator. The words 'Southern Cross', written on the fuselage, were later made deeper, as was the registration lettering under the cabin windows. Later still, the registration letters under the wing were replaced by large letters 'Southern Cross' spaced across the full span. The wing span was 71 feet 8-1/2 inches and the power was supplied by three Wright Whirlwind engines of 220 hp each. The aircraft's top speed was 120 mph, and cruising speed 94 mph.

The Model. History. I believe I can safely say that the model, Southern Cross, has given me more pleasure to build and fly than any other model I have made. Its early career, however, was not too happy since, after its maiden flight, one which far exceeded expectations and without need of any trim whatsoever, an ill-tempered 'pylon' job chose to terminate a power dive on the starboard wing. Fortunately, no other part of the model was touched. After careful repair, Southern Cross was ready for another outing and this time, after two perfectly good flights, the third ended on rather rough ground, causing several uncouth remarks when the fuselage was observed to have caved-in just below the cockpit. This, however, taught me a valuable lesson as on inspection it was noted that the longerons were saturated in fuel and their strength factor was about that of pulp wood. This was due to not having sealed the engine compartment sufficiently with banana oil and not having a drainage hole in the floor. Consequently, a new fuselage was built, and since then there has been no trouble at all.

The climb is perhaps slightly faster than should be, but the glide is remarkably flat and the free-wheeling props appear to have a stabilising effect. Complete building instructions are issued with each APS drawing. "

Quote: "...gorgeous little free flight scale model of the Fokker F.VIIb 3M 'Southern Cross', or the Fokker Tri-motor. The model was designed by H. Parrish and has a wingspan of 40 inches. It was designed for a motor of 0.3 to 0.5 cc so, with its thick wing, it certainly shouldn't be prone to any bad characteristics, although the designer admits the climb is a bit fast.

Once again if you decide to build from the tracings please take care and double check before cutting anything." 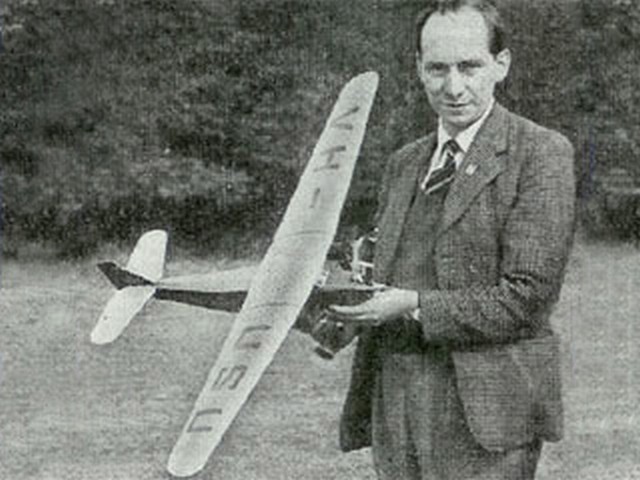