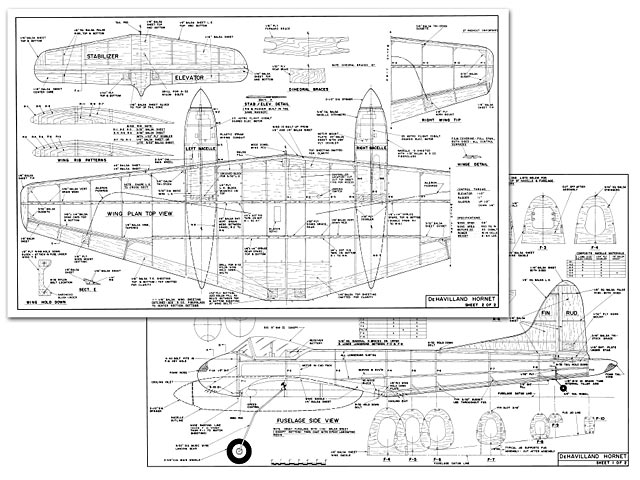 This is a good-looking sport-scale model of the twin-engine Hornet fighter; variation in power and flight duration available with unique battery installation. Good takeoff, flight and landing characteristics.

THE OPERATIONAL success of the Mosquito Bomber was the basis for the development of the deHavilland 103 Hornet. The Hornet was conceived as a long-range, high-speed fighter that would be capable of combating the Japanese in the South Pacific during World War II. To satisfy the requirements for long range and high speed, the Hornet combined the ultimate in streamlining with twin 2,000hp Merlin engines. While the Hornet reminds one of the Mosquito and did benefit from that successful airplane, it was, in fact, a completely new design.

The first prototype flew in July 1944, only 13 months after detail design had begun. The prototype's climb and speed were exceptional. It reached 485mph - a record for prop-driven airplanes. Production and delivery of Hornets to the RAF did not begin until February 1945, so the war in the Pacific ended before Hornets could participate. They did, however, see considerable action as ground-attack fighters against the Malayan terrorists in 1951 to '54.

The Hornet was the last piston-engine airplane of the deHavilland line. Considered by many to be the ultimate in fighter design, it is unfortunate that not a single one has been preserved.

Why a twin? As a number of designers and builders have said, the electric-powered model is ideally suited to twins because there's no danger of one engine out. The arrangement of the two motors in series ensures that both are always powered.

Once it has been decided to model a twin, there are countless possibilities, from civil transports to bombers to long-range fighters. Few are modeled with gas engines because of the dreaded engine-out syndrome. For those who are interested in building electric twins, I strongly recommend Keith Shaw's article in the December '91 issue of Model Airplane News. Keith is a superb scale modeler and has been designing and building electrics - many of them twins - for years.

I selected the Hornet because it's aerodynamically clean and has very pleasing lines. It's well-proportioned for scaling as a model. The long engine nacelles and the sharply tapered wings give it a distinctive appearance in flight. The tapered wings are however a little more trouble to build, and washout is essential to avoid tip-stalling. The sleek con-figuration with adequate power provides a stand-off-scale model that performs well.

Power system. The Hornet uses two of the popular size of electric motors the AstroFlight geared 05 cobalts. Following discussions with Bill Young, Scale Electric editor of R/C Scale Modeler, it was decided to use iron stator rings on the motors, The stator rings increase efficiency by com-pletely containing the magnetic field. The rings are very thin and weigh less than 0.5 ounce each. They are inexpensive and can be bought from Hobby Lobby.

On a test stand, using nine cells, I tested a single geared 05 with and without the iron rings. I measured current draw and rpm. With the stator rings, the motor showed about a 15 percent reduction in current draw with hardly a measurable drop in rpm. This current reduction translates into longer flight times.

Construction. Attention to weight is crucial in electric-airplane construction. Use 6- to 10-pound/square-foot balsa wherever possible, except where something else is specified. Except for the ply doublers over balsa, use plywood/ hardwood only in high-load areas such as the landing gear and the wing mounts. Minimize the use of epoxy; thick and thin CA should do the job with few exceptions. Covering can be any light film..."

Article pages, text and pics, thanks to DHman. 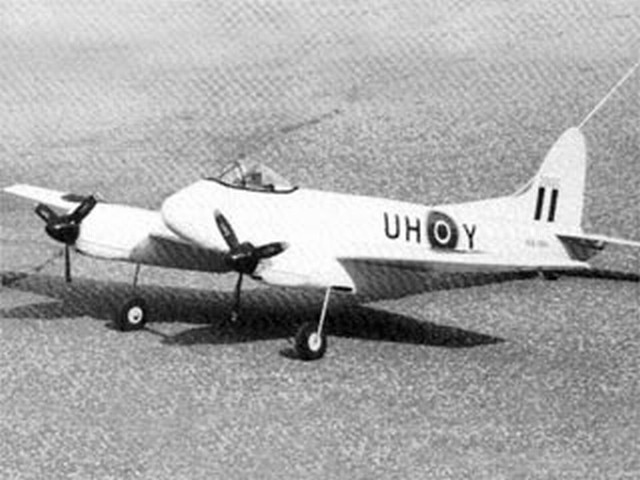