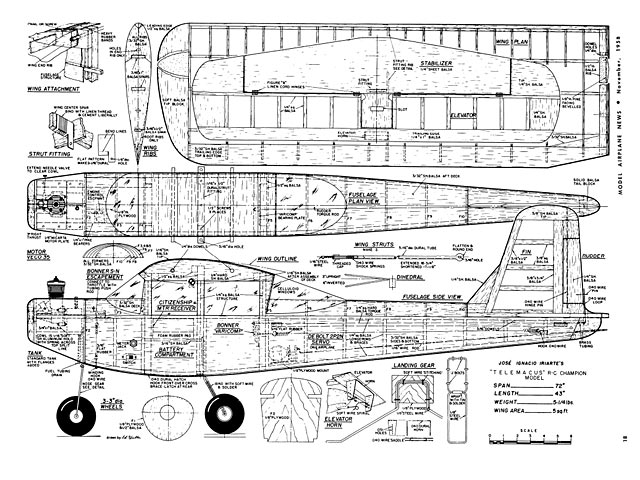 Although designed to make inverted flight as easy as normal flight, Gaucho has many structural and aerodynamic characteristics that recommend it for both sport and contest flying.

Central idea is the symmetrical wing section (NACA 0015) combined with telescopic, supporting wing struts. These allow the dihedral angle to be altered to a new position during inverted flight, which gives the machine great stability when inverted. Stability while inverted is equal, if not greater, to that in normal flight.

The horizontal stabilizer has the greatest possible area movable so that only very small angles, and thus loads, have to be carried by the elevator dur-ing inverted flight. A large capacity tank allows the engine to function whether upright or inverted. The model is exceptional! robust, having survived several earthshaking accidents, suffering only slight scratches of the paint job. The accompanying photographs were taken after more than 150 (not all successful!) flights.

The radio equipment is neither costly nor complicated. We use a Citizenship 27 single-channel receiver that actuates a Bonner compound escapement of three positions, to which a fourth contact has been added so as to allow the 'blipping' of the engine's Bramco throttle - which gets its muscle power from a Bonner carburetor escapement. The elevator is moved by a deBolt 2P2N that is controlled via the third position of the Bonner escapement. This seems contradictory because the Bonner works on three volts while the servo needs only 1-1/2 volts. What happens is that when both the Bonner and the servo are working simultaneously, the voltage drops sufficiently so as to not allow the servo to pass its correct position. On the other hand, the greater-than-normal-voltage assures us that the servo will function perfectly at all times.

The aerodynamically-balanced rudder is actuated by means of the familiar torque rod. The elevator also is moved by a torque rod, for which an opening with an appropriate bushing is made in the rear of the fuselage. This torque rod has at its end, a short piece of soft wire; a spiral is bent in the soft wire and an extension of the wire penetrates into the elevator control horn. According to the way this wire is bent, more or less movement is obtainable at the elevator. The incidence of the latter is graduated by means of the two cross wires of the elevator control horn. These are moved up and down on the dural supports which have a series of holes 3/32 inches apart. Care must be exercised when drilling these holes to make certain that corresponding holes will place the wire parallel to the elevator surface.

Update 18/04/2017: Added alternate scan, thanks to JJ. This one is higher resolution, but has some small areas blanked out.

Quote: "Hey Steve, I liked the Gaucho plan so much I dug up the article and scanned it... Joe" 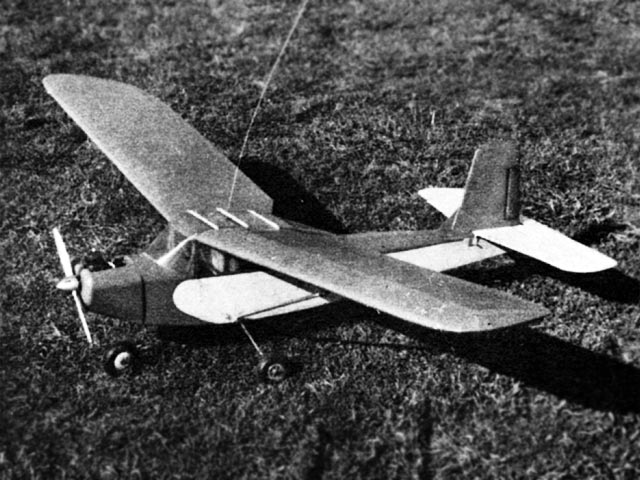