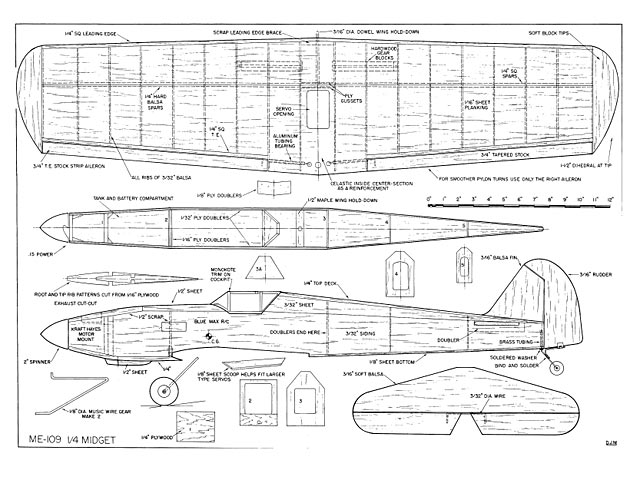 Quote: "Quarter Midget Racing is growing in leaps and bounds and its excitement has grabbed many a modeler in Indiana, myself included. I think the racing fever hit me at our Wednesday luncheons every week. Every week as many of our club members as can beg, walk or sneak off from work to meet at Ed Reike's house and go to lunch. We average 10 to 20 modelers all talking about contests, engines, girls, models, airfoils, girls, plans, kits and girls. While not much gets accomplished, once in a while a glimmer of something interesting shines through the gravy stains.

On one of these occasions, Bob Finley and Hal Vandiver were discussing the possibilities of getting a team together to compete in 'A Midget racing. Bob has become somewhat of an authority on this class and their powerplants, so it was decided he would make the engines go. Hal is by far the better flyer of us all and so he fell heir to the job of test pilot. I got stuck with the designing and building end of things. Bob Godfrey was drafted as the fourth man on the team, Mr MonoKote of Indianapolis. Our size 10 shoe held adroitly over his Ryan STA quickly made him see the need and volunteer to the cause. The foursome tip-toeing through the tulips toward the flying field might look a bit like a pair of Laurel and Hardys, but what did you expect, Raquel Welch maybe?

The day finally came for the maiden voyage of our little ME-109 inspired concoction. We won't call it ''eyeball scale,' it's surely less than that, but all action in the air. Bob Finley and Hal Vandiver departed the work scene at noon and we proceeded to the flying field. Since my cohorts were still in their suits I was left with the oily task of starting up the engine.

Harold put the ship through its paces as if it were a pattern ship. Loops, rolls, inverted flight, Immelmans and a few other unrecognizable things. After about 10 minutes of this I decided to try it even though it was set up on standard sticks. I fly split sticks, but no matter, at the time of the launch we found something amiss. A battery had gone dead and we retired to change the cell. We also took the opportunity to switch to a newer ST .15 engine for the races coming.

At the Muncie contest we found out you should never have a truly free-wheeling tailwheel. It ran in circles and I almost had to beat it with a club. With that remedied, it held its own nicely in the air, catching others and passing them. Perhaps it was because we were flying in the wrong direction, for we lost. The second heat came along and by that time I had cut the tail-wheel off and turned it into a wire skid. It now tracked true and it was off and running far ahead of the pack. We were stretching the lead on every turn when on the 8th lap the engine quit. The tank had slipped back and pulled the fuel line off. We were not embarrassed however, we fulfilled a function. The world needs losers too!

Give the design a try. It's easy to build and quick as grease, a good ship to try your hand in the races and it can fly some of those pattern maneuvers to boot.

The Construction. The place to begin is with a selection of straight and light wood. Cut the bottom wing planking from 1/16 x 6 in balsa, measured to fit from the 1/4 sq spars to the trailing edge, from the wing center to the tip. Pin this to the plans. Next, glue the 1/4 sq spars onto the planking. The ribs are now cut out and the easiest method of doing this is to sandwich nine pieces of 1/8 in balsa between the tip and root rib templates and then carve and sand them to airfoil. Final trim each rib and attach them onto the lower planking..." 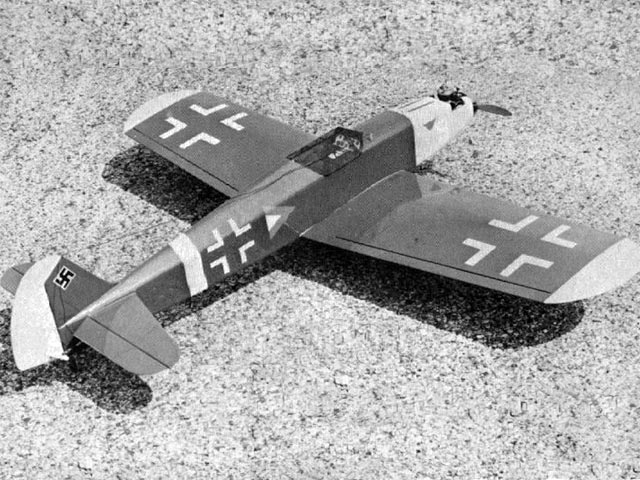