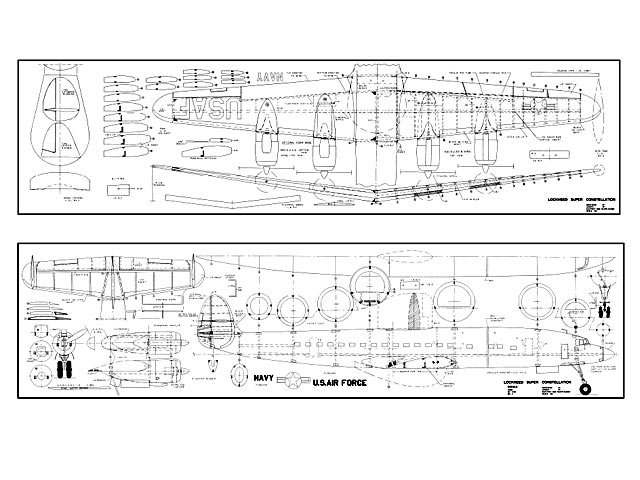 Lockheed Super Constellation (EC-121). Radio control scale model for either electric power or as a slope glider. Scale is 1/24.

The EC-121 upper radome is too narrow. The radome enclosed the height finding radar (APS-45) that had a vertical orange peel antenna that oscillated vertically and with a azimuth of 360 degrees. My 50 year memory believes the base had to be near 48 inches and the height is 98 inches. I had to climb in to adjust the antenna and replace the gyroscope that was housed just aft of the antenna base. Also the nose radome wasn't an equal radius (side view), it was a greater radius on the top than on the bottom, adding to the unique graceful appearance of the Super Connie. I was blessed with over 1800 hours flying in this beautiful aircraft. CS, USN Ret.
CS - 21/05/2016
Dear Outerzone, my download of your superb Super Constellation will be very useful to hand-manufacture the broken-off wing tanks of my Dinky-Toys France Ref. 60C = 892 1/190 scale model (1956-62), which I recently took from Paris to the West Indies, where I work twice a year, to photograph it on slide film in-situ on the approach trajectory to the runway, as I did two months ago in Fort-de-France. I may scan and send within the next few months. I visited the Concorde prototype at Toulouse-Blagnac in 1971, first flew on a two-seater glider in 1980 as a student, walked the Aberdeen, Scotland tarmac for my first passenger flight on an HS 748 in 1982, flew a few times to Berlin-Tegel with the wall in sight as the Rosinenbomber did during the blockade, and crossed the Big Pond for the first time on March 22nd on board the newly-delivered Airbus A350-900 of Air Caraibes. Quid of the future?
PeterDenimal - 08/01/2018
Reading the query about the upper radome on a 'Super Constellation', I thought to check my 'United States Navy Aircraft since 1911' (Putnam 1968) and width would appear to be half the fuselage width at that point. I converted a Revell/ Heller 1/72nd scale model and it looks 'right'. I also painted this one [more pics 003].
AlanV - 19/12/2018
I was looking for such a plan for a long time.
Stefan Petermann - 22/06/2019
Add a comment