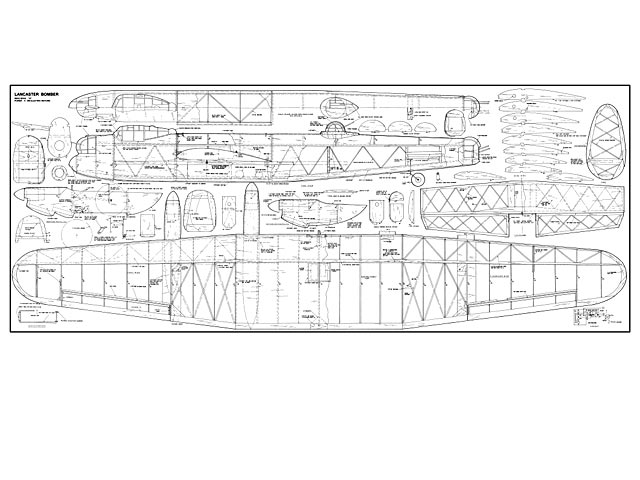 Quote: "A winter building project with a difference! Peter Holland's challenging sport scale Lanc is 74 in span for three-function R/C including retracts.

Electric powered flight is just one of the advantages when considering a multi-engined aircraft as the subject to be modelled. Who hasn't dreamed of flying a Lancaster, yet been put off by thoughts of engine starting and rpm matching, the weight and cost of such a project in terms of an IC powered machine?

No, it just had to be electric. It had to be fitted with standard R/C equipment and it had to be fairly easy to make. A few calculations showed that a wingspan of 74 in would be about right for four standard 540 type electric motors switched parallel for climb out and in two pairs of series for cruise. The weight should be under 6 lbs and, in order to clean up the drag department, the undercarriage should be dispensed with or made retractable.

Now six pounds of lightly built airframe/battery payload seemed to be an unwilling candidate for 'belly flopping', so the wheels had to be manually retracted, the model hand launched and the wheels allowed to lower by gravity when released via R/C, to lock down when on finals. This system was proven on an earlier aerobatic electric model with large motor and 16 cell nicad. I never did like to see a scale subject dangling the wheels when they should be up, so that's the choice. Hand launching is not difficult unless the weather is dead calm or a helper is not available - I would not recommend hurling and taking control oneself for the first flight of such a model.

Fuselage: The lines have been slightly adjusted in the interests of construction, so the belly is a little less rounded; triangular fillets and deep lower longerons allow a sanded-off section below, whilst light top longerons, shaped Warren bracing and top formers provide a base for curved sheet skins. The nose section defeats such detailing, so is planked back to the cockpit area with 1/8 sheet over formers and keels. The nicad bay is reinforced with 1/8 sheet up to the wing seat, as this is all that holds the ends apart, Luckily, I spotted a scale feature that could add strength, those external stiffeners applied to later marks of Lane. These, made from spruce, give much-needed strength when landing on less than smooth grass.

Where the fuselage starts to taper for the tail cone, butt-end joints are reinforced with cross grain 1/64 in ply strips under the skins. Glue these to the former first at F7 and F7A. The tailplane doublers are stuck to the skin, so have to be applied whilst offering up the skins to the bare framework. Add the tailwheel mount and bottom patch before sheeting the top decking..."

Article pages, text and pics, thanks to RFJ. 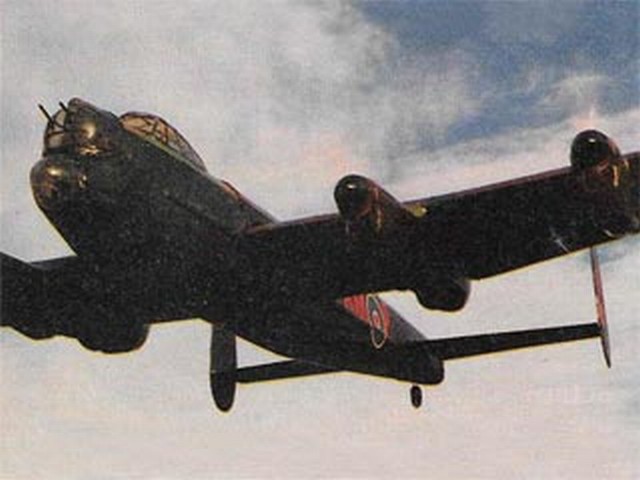 I am actually looking for a plan for the Avro Lancaster making it out of wood. Not to fly but to have sitting on a shelf or hang off the ceiling. Could you help or could I use this plan. thanks
Evert - 13/05/2019
Um, this is 72 inch wingspan, and of course, this is a plan for a flying model, so not ideal. If you are wanting a solid wooden ornament, maybe say at 1/72 scale, then I'd suggest look for a simpler plan, all you really need is the outlines and the cross sections, then just commence whittling away. Maybe start by looking at the Solid Model Memores site over at http://smm.solidmodelmemories.net/Gallery/displayimage.php?album=115&pid=4648 that might be the thing.
SteveWMD - 13/05/2019
Add a comment