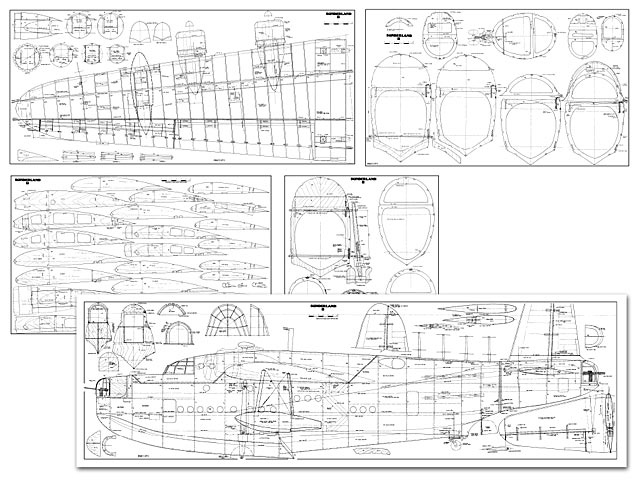 Quote: "PERHAPS MY Sunderland is not the first model to be built of this prototype but, as far as I am aware, it is the first R/C model to be flown successfully. What have the British modellers been doing for the past fifty years?

Scale and semi-scale models have always been my favourites and waterplanes in particular - and I have been designing and flying them for many years. Between 1982 and 1990 I have been the Dutch national champion in these classes seventeen times. So why do you never see my name in the lists of European or World Championship contestants? Being a teacher my commitments prevent me attending the competitions and my principal will not even allow me time-off on an unpaid basis. The only time the championships coincided with school vacancies was in 1989 and only two weeks before the contest my beautiful scale biplane was written-off in a mid-air collision with a fellow clubmember. Sometimes a modellers life can be a little hard and this was effectively the end of a personal dream.

Prototypes and planning After designing a number of non-scale floatplanes, a twin engined flying boat (2.6m span for '40' engines) and winning nine waterplane national competitions I wanted to build a successor to the popular B-17 Flying Fortress design (published in RCSA Autumn 1987 and drawing available through the ASP Plans Service). It had to be a model which could be entered for normal scale and waterplane competitions, with models of these sizes and complexity it is not possible to build separate models for the land and water events (the more so because I design my own scale models).

My choice eventually distilled into the Short 'Sunderland' to one tenth scale and, although not an amphibian, capable of being flown from water and - through use of the 'beaching gear' - from land. The particular type selected was a late Mk2 with a lot of aerials and no top turret. however. it is easy to modify it to other versions. The editor suggested that I might use the Aviation News scale drawings as a basis for the design and then, by coincidence. I saw a very good full colour three view of RB-U (W3986) in a Dutch magazine. For me this was a bonus as the camouflage scheme appealed more than the white and grey colours normally associated with the 'Sunderland'.

RB-U was part of the No10 squadron of the RAAF based at Pembroke Dock. England. On the 5th June 1942 it damaged U-boat 72, was attacked four times by a Focke-Wulf 200 Condor and in spite of being damaged managed to see off the Condor. An Italian submarine was also damaged on the 1st September 1942 but on the 20th May of the following year RB-U crashed near the Eddystone Lighthouse, with the loss of all twelve crew members.

At last, in autumn 1988 I succeeded in obtaining some large black and white photos of the prototype and commenced drawing during the winter followed by the extensive building programme. The following spring my wife and I visited the Hendon museum, a visit kindly arranged by my modelling friend Bryn Charlton from Croydon whom I had met together with his charming wife, Sylvia, at the Open Dutch Nationals. At the museum we were accorded an appointment with Mr A Cormack who was able to give us chapter and verse on the aircraft. Many thanks to all concerned for this fruitful and inspiring long weekend.

Fuselage: Lower half: The fuselage is built in two parts with the formers being split into two halves. Formers nos F1 to F19 are cut from 3mm plywood and 3mm balsa ply (or Liteply) you can save wood by cutting some of the formers from the middle pieces of the larger ones. Formers nos 3 to 10 have a 3mm plywood strengthener the exception being Former 5 as this will abut former 5b and a description is given later. Glue the 3mm balsa plywood strips to former 7 and construct two formers no 16 of 1 mm ply. 6mm balsawood and 6mm ply as shown on the drawing. Glue to formers 15 and 17 the 1mm ply strengtheners for the fuselage joiners and formers 13 and 14 strengtheners for the tailwheel bearers.

Building: Place on the building board a strip of wallpaper (upside down) and draw on it the centre line and crossline for positioning the formers. Connect the two formers nos 16 (with 2mm balsawood strips between them) by bolting them together with M4 socket screws and fix in position the lock nut. Position the formers F1 to F19 upside down on the board securing them on either side by pieces of 10 x 20mm wood. Shore up former F5 perpendicular to the building board and connect formers F5 to F10 below with 2mm plywood wing bearers and above with the 2mm ply undercarriage gear bearers. Note: before the undercarriage bearers are fitted the 4mm ply strengtheners from F5 to F6 should be installed and all cut out and holes for the undercarriage tubes should be drilled before finally gluing in position.

Glue to Formers F15 to F17 the one piece brass flat tube fuselage joiners and squeeze the ends to prevent the flat spring steel wire extending too far (not fitted at this time). Join formers Fl to F2 with 2mm plywood battery floor and walls and place the 2mm plywood strips (with holes drilled in) between formers F13 and F14 of the tailwheel bearers and glue between it a small hardwood block drilled with a 5mm diameter hole for the brass tube (the steering arm holder). At this point you should also glue in position the 2mm plywood strip with M3 blind nuts for the aerials if you are building the mark 2 version, this is fitted from formers F13 to F15.

Glue all the balsawood and spruce stringers in position with the exception of the lowest one nearest to the board this is positioned later when the upper half of the fuselage is built. The positions of the cuts in the formers can be adjusted to give a nice smooth line of the stringers. Glue onto the stringers the 3mm plywood cross braces for the brass tailwheel and water rudder tubes.

Now we can start sheeting the framework, starting first with the sides and continuing to the rear and underside. 3mm balsawood is connected to the 2mm balsa (1mm balsa filling strip plus 1mm ply joiner) this is from 48 inch long and 5 inch wide balsawood continuous from formers F1 to F19. Working from the plan 48 inch x 4 inch wide balsawood is also used for sheeting from Former F1 to F18 in a continuous length..." 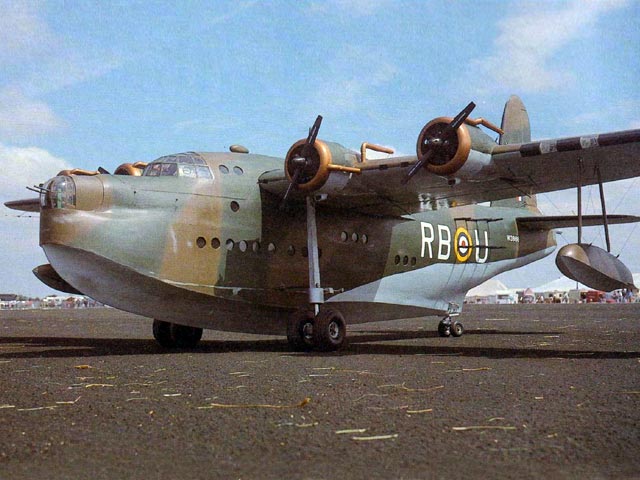 Hi Steve, I just cut out the paper parts for the Short Sunderland II, the 180" model, and I've discovered that it isn't a complete plan. Almost, but not quite. It seems to be missing fuselage formers 3 and 4. I've gone over both the outzone's copy and the one at Hip Pockets, and I sure can't find the them. Please Check to see if I have somehow overlooked some aspect to the formers? I looked for phantom lines on formers to see if perhaps, for example, no 5 was also doing double duty, but no I don't see 3 or 4.
BalsaBaron - 25/07/2013
The plans are missing ribs 3 and 4. Can you help?
rdaleburley - 05/09/2013
Hi Steve, I read the comments re this uncredited plan lacking two important formers and decided to do some research on it. I'm now quite sure that it is a re-arrangement of the Short Sunderland Mk II plan designed and drawn by Jan Hermkens in 1990 (design updated 2010) to 1/10th scale. The details of Mr Hermkens' plan tally exactly with the version offered on OZ. The model won the Dutch Open Championship for Stand-Off Scale '90+'91. Mr Hermkens has his own website - http://www.janhermkens.nl/ - which includes photos of his Sunderland under construction. Incidentally, the correct span is actually 3.45 m (136 inches), not 180 inches as shown on Outerzone. Regards,
SBurling - 13/02/2015
Yes, that is correct the span is 136" not 180". Yes that is my old plan from 1990 and someone did re-arrange it to publish it (permission ??), but did a bad job, because he forgot the fuselage formers 3 and 4, and also the ribs 3 and 4 ! In 2010 I have updated the plan, changed some things, among others the Wing joiners (instead of flat steel, dural and carbon joiners). Kind regards, Jan Hermkens www.janhermkens.nl/
Jan Hermkens - 02/11/2019
Hi Jan, Please could you tell me if I cut all the formers for fuselage and wing using a fretsaw machine or are they cut using lazer?
Keith Jones - 21/08/2020
My Dad was tail-gunner in a Short Sunderland II during WW2 for 4.5 years. The plane had code name "P for Peter" which I have a photo of. The plane had to ditch in the Atlantic just south of Ireland but he survived with only minor injuries.
Mark Laidlow - 04/10/2020
Add a comment