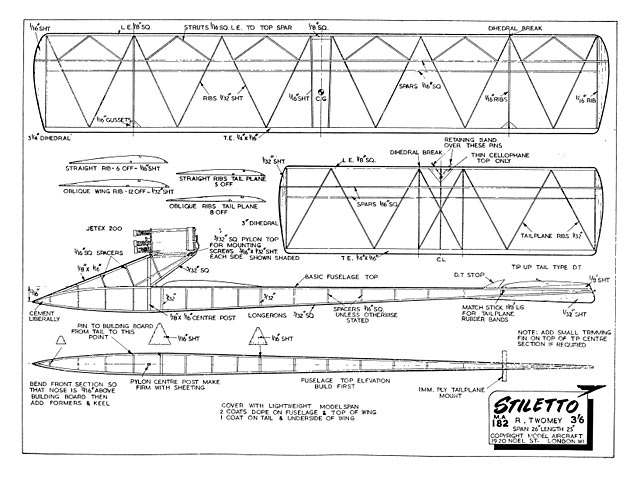 Quote: "A contest model for the Jetex by one of the experts. Stiletto, by Dick Twomey.

Stiletto is the latest in a line of models designed for the jetex 200, and developed from the original Firecrest (oz5369), which won the first ICI Challenge Trophy contest in 1949 with a 20:1 ratio.

Since then the tendency has been towards lighter construction, reduced wing area, and smaller fuselage cross-section; so that the biggest asset of present-day Jetex models is a steep, fast climb.

Stiletto belongs to this school of thought, and must be trimmed accordingly. It is able to stay in a fast straight climb, and will gain maximum height in this way. High-thrustline is the ideal set-up for this trim, while under-slung jet units generally characterise the 'spiral-climb' type of model.

The original model was lost after an 8-minute flight (on one pellet). It had previously qualified for the ICI Finals with 3:55 oos on 14 seconds of fizz (ratio 16:8). The second Stiletto built gained fourth place in the 1953 ICI Trophy, with a ratio of 9:07; and anyone who attended the All-Britain Rally can remember that weather conditions were not ideal.

It is of vital importance to go easy when trimming, starting with only 4-5 sec of fizz. If the least tendency to turn under power is apparent, do not fail to make a correction before the next attempt. Anyone who has flown contest Jetex models (or only watched them) knows that they are even more prone to spiral power dives than prop-powered planes. With reaction propulsion, variations of thrust are common, and such variations will cause inconsistencies in airspeed fatal to a circling model. Moral: keep straight! Then it will be safe to say 'the faster the better' - and the resulting climb will certainly satisfy you.

Fuselage. The fuselage section takes the form of an inverted triangle ie the 'base' is at the top, and the 'apex' forms a keel at the bottom. The fuselage is built upside-down, the base being built first, on the plan. (See fuselage top elevation.) After the spacers have set, the first five inches of this are curved upwards, till the point of the nose is 11/16 in from the building-board. Now the formers can be added..." 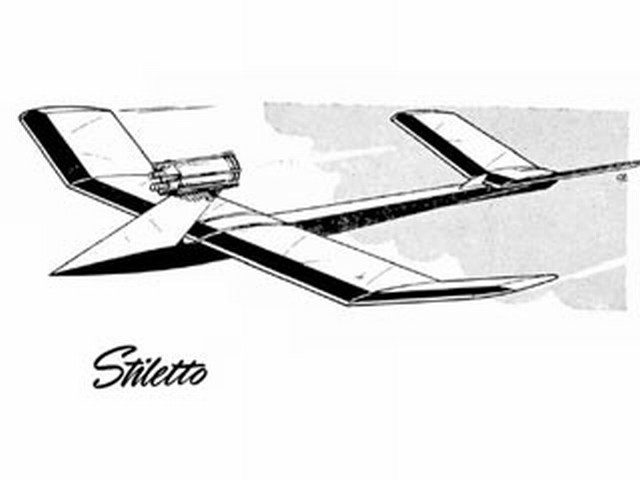