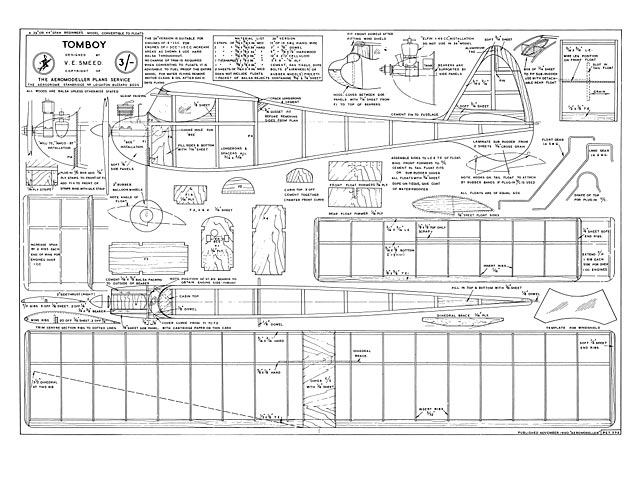 Quote: "TOMBOY is one of the most amazing models we have handled at the Aeromodeller offices... It is simple to build, easy to fly and as intended, an ideal beginner's model.

Just before starting on the building instructions I want to say how lucky I think any beginner is to have a model like the TOMBOY to start on. It is so easy to build - and presumably you have had at least some previous experience of modelling by now - that the instructions will not need to be quite so lengthy as usual, particularly in those parts which are identical in method with glider or rubber models.

A glance at the plan of the TOMBOY is sufficient to show that Mr. Smeed is a man of ideas - one of which is to use up all the available space on the paper! As you will see, he has catered for a variety of engines, both as regards make and capacity, calling for different grades of wood and different sizes in wing and tailplane. There is even the alternative of making the model a floatplane, with interchangeable land or water undercarriage! For the sake of those who are building this as their very first power model, I think that the best plan will be to standardise on the following layout: E.D. Bee engine; 36 in wingspan; land undercarriage - the wheels to be detachable or not according to choice. (If they are detachable, they can later be replaced at will by floats without effecting the rest of the model.) Right? Then here we go!

Perhaps the slowest part of building a model is the cutting out and sanding of all the ribs and the fuselage formers. Personally, I always like to get this over with right at the start, so I suggest that we do it now.

First of all the ribs. The method applies to both wing and tailplane ribs. Lay a piece of semi-transparent paper, grease-proof will do, over the rib outline as marked on the plan, and trace it onto the paper, including the place where the spar cuts through the rib. Now use carbon paper to trace this outline onto a piece of thin plywood - 1mm if you have any, otherwise 1/16 in. The outer grain of the ply should run from end to end of the rib shape. Cut out the ply rib, and sand accurately to shape, checking by laying it onto the plan rib as you proceed. Use this rib as a template, round which to draw all the ribs needed onto lir in. medium sheet balsa ; 20 for the wing rib, 9 for the tailplane. Cut these out roughly without cutting out the spar slot, and sandwich them side to side against the accurately finished ply rib. Push two straight pins from each side right through the 'sandwich' to hold them firmly, and sand until they are identical with each other and with the ply rib. Then use a small hacksaw to cut right through all the ribs together at the spar slot; one cut down each side of the slot as already cut in the ply rib is sufficient; the loose pieces can then be scraped out.

Formers. These are traced out first onto greaseproof or similar paper over the plan, and then transferred by means of carbon paper onto the 1/16 sheet balsa - or plywood in the case of Former 1 and 1A. With balsa, the grain should be running along the length of the former, ie from end to end, rather than from side to side..."

Update 29/03/2021: Added review (of the Falcon Models kit) from Aviation Modeller International, October 2005, thanks to RFJ. 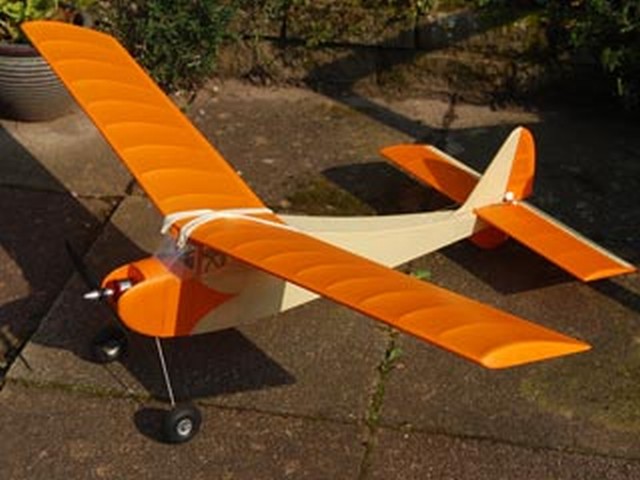