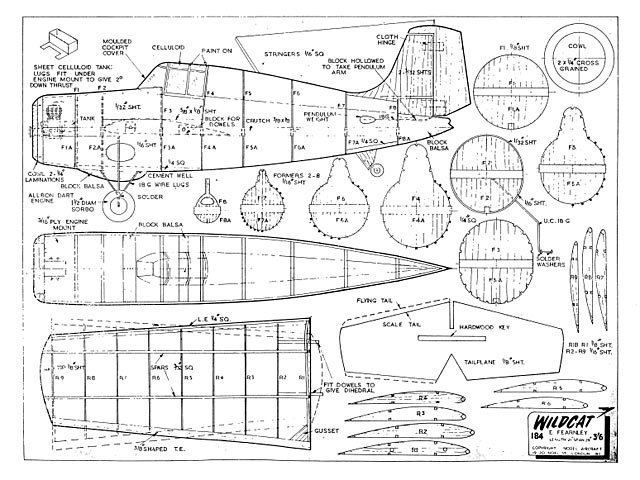 My first model in the World War II series was the most outstanding fighter Britain produced, the Hurricane (oz6053). This one is probably the American equivalent - the Grumman Wildcat. For this stubby mid-wing job was, like the 'Hurri,' in the picture wherever there was fighting, right through the war. Its lease-lend counterpart, the Martlet, was with the Fleet Air Arm, in Malta convoys against the Italians, and the Germans, but it was against the Japs in the Pacific that it really went to town.

Eight of the twelve Wildcats on Wake Island were caught by the Japs in December 1941, but the remaining four were kept flying by the Marines for a week against almost the entire Jap air force! When the time for revenge came and Wildcats were carrier borne by the thousand, the Japs were eliminated by the hundred in each fight. The famous battles seen on the TV series 'Victory at Sea' showed Wildcats in nearly every engagement in the Pacific. Such names as Midway, Guadalcanal, the Coral Sea bring to mind Avengers and Devastators, protected by Wildcats, always cutting a way through the 'Zeros.'

The mid-wing layout gives a very flyable model. The only difficulty in having too small a tail for reliable stability has been overcome by an increase in area.

Fuselage: The construction follows the Hurricane, being 3/8 x 1/8 in crutch with ply motor mount, and sheet formers added. The stringers are added on to the formers except where indicated, being notched in there. The front is sheeted in, and the wire under carriage (slightly simplified in the model) added. The cowl is laminated from sheet, and should be well finished with sandpaper and filled with wood filler before doping.

Wings: These are as simple as possible, but are nevertheless strong. Be sure that they are true, and mounted on the fuselage at exactly the same incidence if you are keen on seeing it fly.

Tail: This is of sheet, sanded to streamline section. Before cementing in place be sure that it is mounted at the correct line up as shown on the plans. Dope tissue over the tail to strengthen and fill in the grain, but avoid warps.

Heavy wheels are an asset to stability as well as appearance. Balance with plasticine until it is slightly nose down when balanced one third of the chord at the wing tips. The flight is lively, but stable, if trimmed properly. Take-offs are extremely realistic, followed by a rapid climb. Like the Hurri it is suitable for flying in quite a small field in calm weather. It is a tough job, the prototype having withstood a full terminal velocity dive into a ploughed field during aerobatic flying. The dummy pilot shot through the canopy, but apart from a broken dowel, the model was flying again in a few moments.

Two last don’ts. Don’t try a bigger motor than 0.5 cc and don’t try test flights at full revs, as this model is fully powered for a snappy flight, and power must be spared in the initial stages."

Update 23/02/2017: Have re-scaled ths plan to correct fullsize at 29in wingspan, thanks to DaveBreeze.