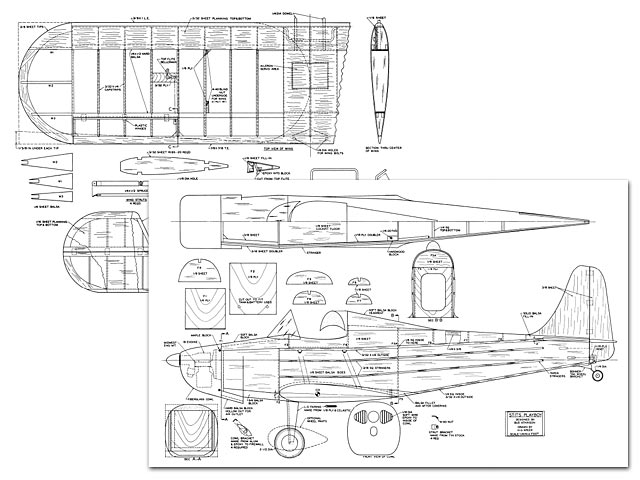 Quote: "Here is Bud Atkinson's Stits Playboy from the 10-68 issue of American Aircraft Modeler. I cleaned and joined this 1/4 scale plan for output on 36 inch wide, continuous roll printers found at most copy centers."

In the long line of Ray Stits' home-builts, one of the first and most successful airplanes was the well-known Playboy. The prototype of the SA-3A was first flown in 1953. Since then more than 1,000 sets of plans have been sold.

The Playboy is a small, one-place, fully aerobatie compact airplane with 22 ft. span. It uses a 60- to 90-hp engine, and is in the 140-mph class with larger engines. The construction of the SA-3A used a welded-aircraft-tubing fuselage and tail with the wings, bulkheads and stringers of fabric-covered wood. The cowling on the original Playboy was modified from the Taylorcraft cowling and is distinctive in appearance.

Playboys can be seen at most any of the home-built fly-ins. They exist in many varieties of modifications, with bubble canopies, various rudder shapes, fiberglass cowls, and even with cantilever wings. Some have been seen with trike gears, Many of the magazines covering the fly-ins have pictures of the Playboy, so when building your model you have many subjects to pick from, and, of course, many color schemes. The original Playboy was red, trimmed with white.

I believe that, at some time or another, every modeler has the ambition to build a large RiC job. An easy scale to work from is quarter-scale, as it is simple to scale the plans from the full-size airplane to the model. Most airplanes at 1/4-in to the foot scale work out rather large and have a wing span of 8 or 9 feet. The fuselage width is almost larger than the prop diameter.

The Playboy was a natural at 1/4-scale with a 22 ft span, which makes the model 66 inch in span. This is an easy one to haul out to the old flying patch, and, also, the wing can be built in one piece.

The fuselage on the full-size Playboy was very slim and streamlined for a homebuilt, so again, the quarter-scale of the fuselage works out at only 6 in wide. This does not give that fat look that must scale airplanes have at quarter scale. The Playboy has over 800 sq in of wing area, so it can support considerable weight.

My Playboy weighs 8-1/2 lbs. I'm sure it could be built much lighter, because I made no attempt to keep it light. The only deviation I made from scale was to increase the stabilizer. Most light, low-horsepower airplanes use small stabilizers, compared to what we use on our models, and since the idea behind the Playboy was to make a Sunday-flyer scale model for the average builder, the stabilizer area was increased to give more stability.

Fuselage: The sides are of 1/8 balsa sheet, with 3/16 square stringers which simulates the real thing when the fabric is applied. The fuselage is large and roomy; in fact, some of the new mini-gear is almost lost in it. The cowling is of fiberglass, much like the Taylorcraft, with grill bars of soft 1/16 wire epoxied to the inside of cowling. A built-up balsa cowling may be used if desired.

The wing and stab are set a 1/2 in positive incidence with the engine zero to the thrust line of the fuselage. This worked out very well, and should not be changed. Balance point is about 40% of the wing chard.

The landing gear was made of wire; most hobby shops have it. The full-size Playboy used a Cessna-type gear, attached to the fuselage but, of course, the full-size Playboy had a two-piece wing and the gear was attached to the fuselage at the same point as on the model. However, the model has a one-piece wing, so the gear is attached to the wing on a 1/4 in plywood mount. Epoxy this mount securely to wing, as shown on plans. You could use a choral gear, but for a model of this size and weight I prefer the spring action of a wire gear - it has worked out very well, so far, on many a flight.

Wing: The wing is standard, with 3/32 sheet ribs and 1/4 x 1/2 in hard spars. Wing tips are made of 3/8 sheet. Be sure to install the blind nuts for the struts. if you plan to use them. The struts are dummies and need not be installed in order to fly. The wing mount is standard practice. I use 1/4 in nylon bolts with a hardwood block tapped for bolts. I use them on all birds, and have found this to be simplest and most fool-proof method.

Flying: Flying the Stits Playboy is sheer joy! Takeoffs are very realistic. As soon as model moves forward 8 or 10 ft, the tail will rise to level position and steering becomes automatic. With just a little elevator back-pressure to keep the nose level, the Playboy will fly itself off. Very little torque is noticed. She will climb out smooth and easy. The ailerons are soft, but more than effective.

The Playboy will do most any of the old AMA stunt patterns. You will find yours will do a spin much more scale-like than most models, slow and easy. As for the landing, I think a beginner could land the Playboy. It's very forgiving, The approach is slow but penetration is very good. When flared about three-feet high, a little up-elevator gives a smooth landing. Make a two-wheel landing. They are beautiful to watch; roll-out is very short." 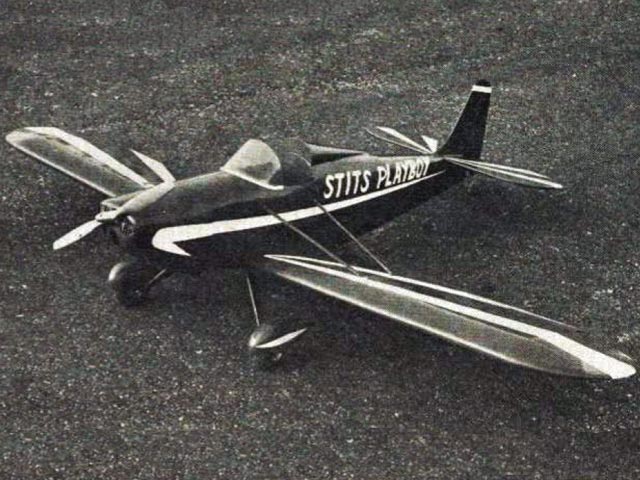 Hi Steve, please find some photos of Stits Playboy [more pics 004-008]. The model is equipped with a TT91 four stroke motor. I have made some "interpretations" of colour scheme ... It flies very well. Also added a photo of the original aircraft [more pics 003].
FedericoTagliaferri - 10/05/2016
Add a comment