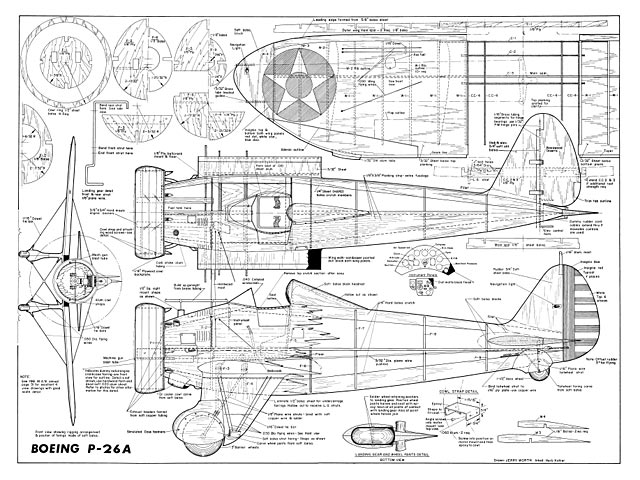 Quote: "The 1964 Nats Scale Control Line Winner is the most superbly detailed and finished model featured on our pages.

Remember when we were kids? We sat at our desks at school looking at the window, day-dreaming and doodling. It seems as though we were always drawing a side profile of some racy-type airplane, (these were the days of the Thompson trophy racers) or some Bill Barnes style military ship. Keep remembering now, weren't these ships always low-winged, big huge cowling around a brute horsepower mill, open cockpit, and fancy wheelpants? Yes, I think you're geting the picture now. These were also the days of great changes taking place in military aviation. While we were sitting in the schoolroom doing all this doodling, weren't we supposed to be doing an arithmetic assignment? Yeah! I guess that's why I haven't be-come an astrophysicist as yet.

A great change in military aviation was definitely taking place. These Thompson racers and others similar planes were setting all sorts of records around the country, and were 'opening the eyes' of the military powers that be. Planes such as the old Travel Air mystery ship, piloted by Doug Davis in 1929, averaged 200 mph over a closed course at the National Air Races. This was event #26 on the program that day, and for the first time, a civilian craft had beaten a military one in a wide-open competition. The die was cast. Military aviation, from that day on, was to be forever dedicated to low-winged all-metal aircraft.

The Army Air Corps began looking for aircraft manufacturers to design and build a fighter to their new specifications. Boeing Aircraft Company was in a good position to deal with the army on this project, as they had definite ideas as to what was essential for three such planes; these were the prototype XP-936 airplanes, ironically it seems to be these airplanes (with incorrect color and markings) that modelers seem to always build.

The first XP-936 was delivered in March 1932. The first flight of this radical new fighter was on March 20 1932. I would like to mention that prior to building this model, I obtained from the Air Force Museum copies of the oiginal test flight report. The original flights were made without any undue difficulties, the test pilot's report was very satisfactory; all this being an indication that the original design was very sound. It also speaks well of Boeing Aircraft's ability to design and build a radical type aircraft without the common faults plaguing many manufacturers at this time.

I can't remember at any time, ever talking to anyone that did not like the lines of this ship; short, chunky; a bulldog looking sort of toughness. This was always appealing to us, somehow. I had always built models as a kid, but as much as I liked the P-26-A, I never did get around to doing anything about it until 1962, about twenty-five years later.

There are two examples of P-26-A airplanes in the USA. One is at Maloney's Air Museum, Ontario Airport, California; and another at the Air Force Museum, Wright, Patterson AFB, Dayton, Ohio. It was the latter aircraft, at the AFM, which was used as a basis for my model. This airplane came from Guatamala to the Smithsonian Institution, but the museum, cramped for space, put the aircraft on loan to the AFM, where it is now on permanent display in the colors and markings of the 17th attack group, 34th pursuit squadron, which was based at March Field, California.

I did say 'basis' above, when I spoke of the original ship's relationship to my model. I did not wish to model this particular craft, because the airplane had been altered in several ways. The tail wheel did not have the full fairing that I liked so much. The wing flaps have extensions that are not characteristic of the majority of operational planes. It would have been advantageous to model this exact airplane in order to do it right, (which is the only way for scale) but I would have to make concessions that I didn't care to. Therefore, I used this airplane for 95% of the research, but modeled another aircraft of the 34th squadron, 17th group. For obvious reasons, this decision was made before construction started.

Control line flying scale: Where do we make concessions in scale? What are we going to do with our scale model after we build it? (This is not a silly question, although, as I write it, it does sound idiotic.) It is important that the model of a plane we build be appealing to us. Don't decide that just because you wish to build a scale ship, you must purchase a kit of a plane that doesn't really appeal to you. Without proper research and background, it will only be another plane.

I realize that all of us enjoy building a scale ship, going to the flying field whenever we can; but this is not the kind of flying scale we are talking about in this article. By all means, please! Let's not stop building scale types for sport flying, but this article is intended to encourage contest type, or competition scale. After we decide on a plane that suits us, we have to decide whether it is within our capabilities to build it..."

Update 15/11/2016: Added alternate scan of same but with different layout from Uncle Willies, thanks to Bernd57. 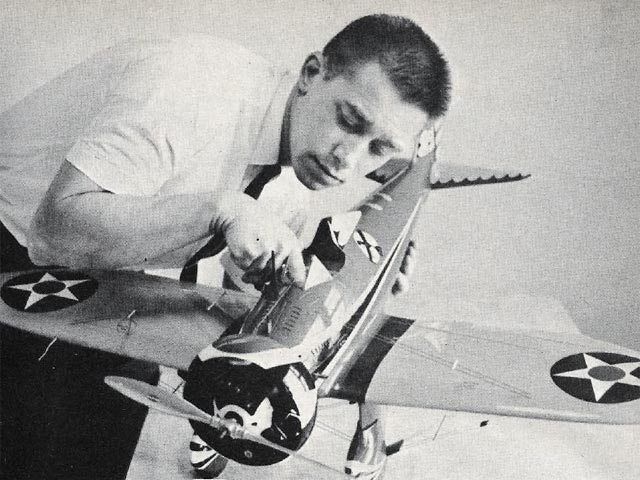