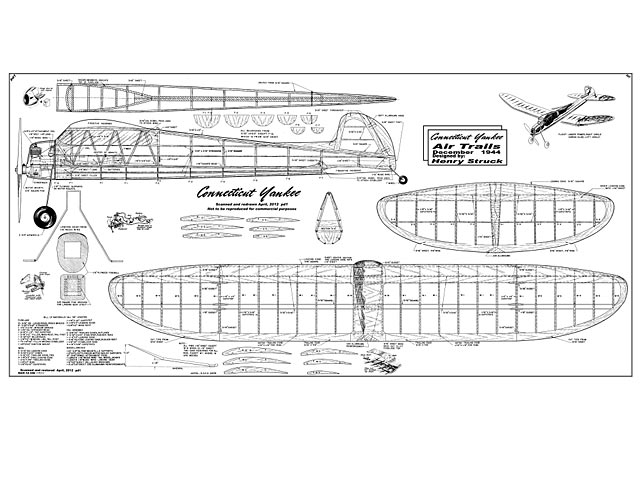 Conventional in appearance, this model nevertheless embodies refinement of design and construction that has proved it excellent for both contest and sport flying.

Aerodynamically, the ship is built as clean as possible to take full advantage of the proven efficiency of the NACA 6409 airfoil used on the wing. A high aspect ratio of 8 and a good tip shape reduce the losses induced by the large amount of dihedral required for spiral stability. A long fuselage with a large stabilizer mounted out of the turbulent flow from the wing assures longitudinal stability. The teardrop section of the fuselage maintains smooth air flow over the fin at the high angles of attack at which a model usually flies. It also functions as a dorsal fin, the effectiveness of which is further increased by a small surface ahead of the normal fin. This provides a dampening effect which discourages spiral diving without in-creasing the drag, as the case would be if a rectangular section fuse-lage were used.

The aerodynamic arrangement described has demonstrated its soundness through flights made at full power. In calm air, using a 15-second motor run, the plane averages two minutes or better, indicating that a duration of about three minutes may be expected with the 20-second motor run allowed by the rules. The model has a wing loading of 10.5 ounces per square foot and a correct fuselage cross section to comply with contest regulations.

Construction. The fuselage and rudder are built as an integral unit. Since the rudder trim tab is the only control required to fly the model its setting is guaranteed by this construction, resulting as well in a more convenient breakdown for transport. The nose is 'beefed up' to take the rough treatment that comes with even the best flights.

Build the fuselage top and bottom directly on the plans. Set up the dorsal strip on the key members indicated in black on the sketch. Add the top and the remaining verticals. Note that the cabin is reinforced at the front with tie pieces. Use soft balsa for all sheet fill and hard balsa for the longerons and stringers. Assemble the fin on the plan and mount it on the fuselage, taking care to keep it straight and vertical. The tab is hinged to the fin by soft aluminum strips cemented to the fin on one side and to the tab on the other. Cement the motor mount hooks of .162 piano wire in the nose, using numerous coats of glue.

Assemble the wing and tail surfaces diirectly on the plan, including the upper spars. Remove and add the bottom spars. Join the tip panels to the in-board panels with tapered gussets block-ing up the tips for dihedral. When dry join the halves at the center with gusset plates. Cover the inboard panels on top and bottom with 1/16 in sheet as far as the spars. Use a few pins to keep the stock from slipping and wrap some scrap rubber over the nose covering to hold it down while drying..." 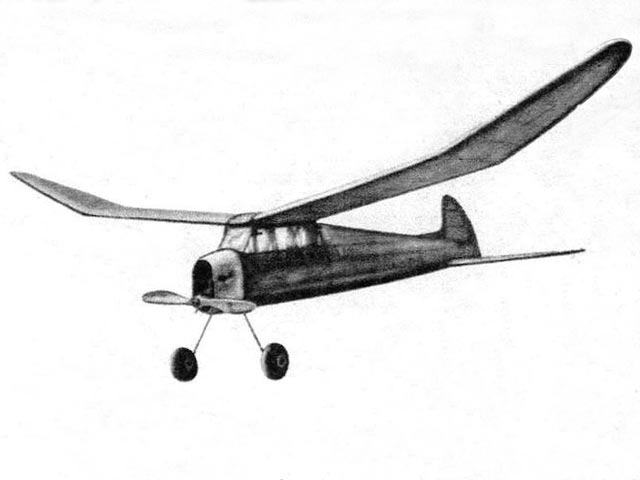