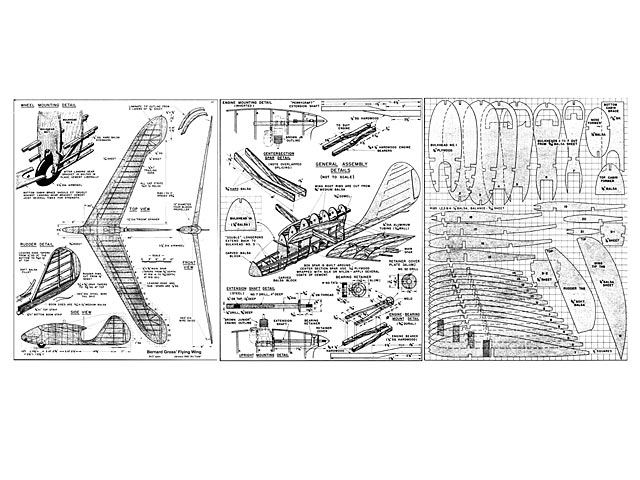 Note the name 'Grosswing' does not appear in the article, but that is how the design is now best known.

Note: This is not a full size plan.

Quote: "Are you tired of the run-of-the-mill models you see around you nowadays? Do you feel run down after a session with the latest control job? Do you think model building is going to the dogs? Well, we have something here that is really different. Something guaranteed to get you out of the rut of same looking control jobs and free-flight models with exaggerated pylons. This flying wing really performs. Not just a lucky hit-or-miss design, it represents several years of experimenting with this interesting type of model.

The original 'bug' bit me about eight years ago while watching Henry Struck experimenting with his highly successful towline flying wings. After a few years of watching the pylon jobs take over with monotonous regularity, the bug bit again. This time it resulted in a flying wing of six-foot wing span, weighing two and one-half pounds, powered by a Brown Junior engine. Flown during the summer of 1941, it confounded the 'experts' and also showed the author the impracticability of twin rudders. Adjustments proved tricky, but the model had its share of flying time.

Then came the Big Fuss, calling all further experiments to a screeching halt. Along came the A-bomb, settling things, and the bug bit again. This time it was the real thing. Gradually, like the accumulation of GI discharge points, the present flying wing was evolved.

Using the previously time-tested wing configuration, a really slicked up version was built..." 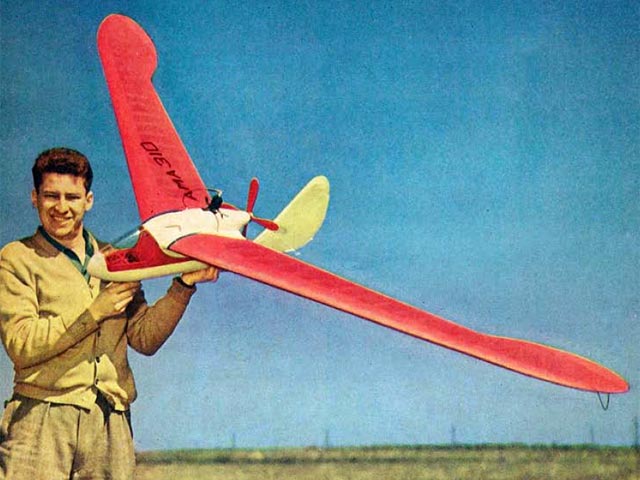