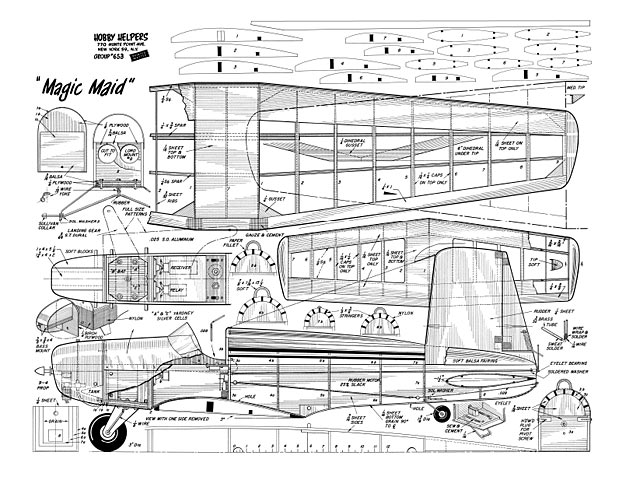 Quote: "You'll be the talk of the town when you get this low-winger into the air! Magic Maid, by Frank Van Buren.

This low wing radio control beauty is for the model builder who wants a somewhat 'different' craft. Although not complicated Magic Maid may appear a little more complex than the currently average cabin model.

The removable nose as on JASCO's R/C Master proves valuable in a hard landing and can be wedged easily for thrust changes. Another feature: you can quickly plunk in a more powerful engine when the model is fully adjusted; extra power is a must if you want to fly in windy weather.

The radio equipment is readily accessible without removing vital parts. Just lift the 'hood' as on an auto and everything is available. Everything needing checking or adjustment is accessible through the cockpit. The escapement is well forward; a brass rod serves as the torque tube.

Start the fuselage with two sides cut from clear, straight-grained, firm balsa. Cut bulkheads, run grain as indicated. Assemble sides upside down on flat table by cementing the aft ends together, then starting at the front and working back, adding the bulkheads.

Add top bulkheads. These are not notched; the stringers are cemented on top. A scrap of stock for a temporary rudder and two soft fairing blocks are tack-cemented in place at the rear and the turtle deck blocks shaped from the string-ers to the fuselage end.

Bulkheads for the landing gear and the Lord mount are each made up of two plywood bulkheads (birch preferred) with balsa filler, cut to fit with all required holes made, then carefully cemented in place. Add the plywood firewalls and the triangular balsa strips used as gussets in the battery compartment. Drill holes for the dowels and cement them in place. Add the plywood switch panel.

The top cowl is cut from .025 SO (soft) aluminum and bent around a large round bottle or small jug. Drill four holes for the screws which act as pivot points and retaining stops.

The engine unit is made by bolting the engine to two bearers and then cementing the latter to the top block which should be as wide as the outside distance between the bearers and deep as shown. A block is then cemented along each side. Note the grain direction. When dry, remove engine and tack-cement cowl in place, using the dowels to align the nose. Carve the nose, using section la as a pattern. In this manner the nose will follow the contour of the fuselage and not look like an undersized derby on a 300-pounder. The equipment used will dictate its own positioning, but all equipment should be installed before the bottom is covered.

The landing gear can be cut from 5/64 in 24 ST dural and all holes drilled while it is flat. Then bend to shape. Caution: do not bend corners too sharp! Form the 1/8 wire axle and insert in the gear. Solder washers in position; use rubber to hold axle in position. The entire unit can now be bolted in place. The tail skid is bent from 1/16 in OD wire and secured.

The vertical fin can be made up by cementing the necessary medium strength balsa sheets together to make up the re-quired width. The rudder can next be cut and the edges rounded. Cloth hinges can be used but must work freely..." 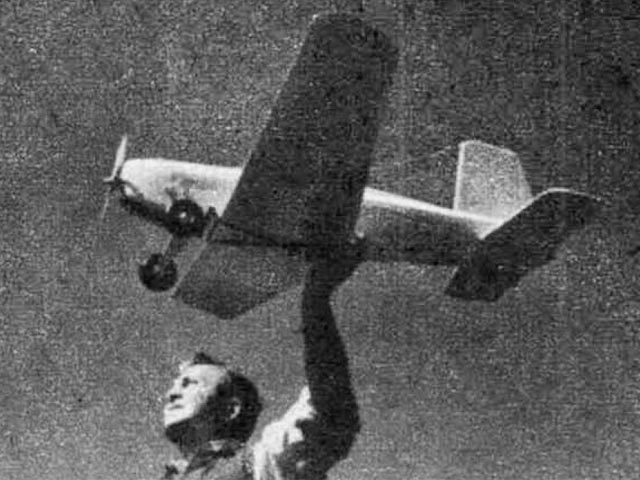