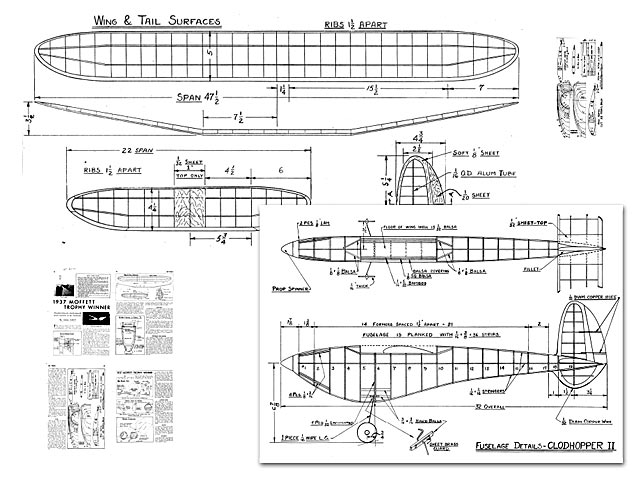 THIS model was designed especially for the Wakefield and Moffett International contest. lt is known as Clodhopper II. The Clodhopper I was Cahill's entry in the 1936 Wakefield contest. Like most famous models it was still in the last stages of construction the night before the contest. Despite the fact that it lacked some necessary sandpapering and doping, it flew perfectly and required few adjustments.

On the first flight, under full power, it showed a slight stall - both under power and in the glide - turning in only 1:02. Jimmy went to work and applied the necessary adjustments. On the next flight it hit a weak thermal about 400 feet above the hangar of Detroit's Wayne County Airport. Leisurely, it flew in circles above the hangar, taking advantage of the rising air to turn in a flight of 13 :32. On the third flight it flew nicely for 2:20. But this flight was turned in at five thirty and the air was calm and free from thermals.

These three flights gave Cahill an average of 5:33 and won him a place on both the Wakefield and Moffett elimination teams.

During the finals of the Moffett the Clodhopper II really showed its true form. On its first official flight it climbed up fast, gained plenty of altitude before the propeller folded back and the model went into its glide. It was soon evident that a strong thermal had the model well in hand. It was sucked toward a white cumulus cloud and soon became a speck in the sky. It hopped from the first cloud to another one. And despite a merry five mile chase in an automobile, it was lost far off on the horizon. And that wa sthe last Cahill has seen of his model. Luckily Buno Marchi of Boston took photos of the model shortly before it was lost. He allowed us to use them to illuistrate this article on the Clodhopper II.

Cahill regrets that he was unable to take his model to England for the Wakefield finals. He fells sure that it would have made a good showing in any contest. After examining the details of the design, you'l agree that it's one of the most outstanding models eveer built.

Fuselage. All bulkheads are made of light grade 1/32 sheet balsa cemented cross grain. 4 light stringers of 1/16 sq are used to assemble the bulkheads and hold them in position for planking..."

Quote: "Generally I have a limited interest in Wakefield and Moffet models but the Clodhopper II has really caught my eye. I think an EP RC version would be a great old timer. Nice bio at the AMA website that gives more info about James Cahill, his brother, and this model. The photo comes from the July 10, 2010 issue of WHAM, the official publication of Wichita Historical Aircarft Modelers, SAM 56 and the Kansas Sunflower Squadron, FAC Squadron #23. The model was built by Jim O'Reilly." 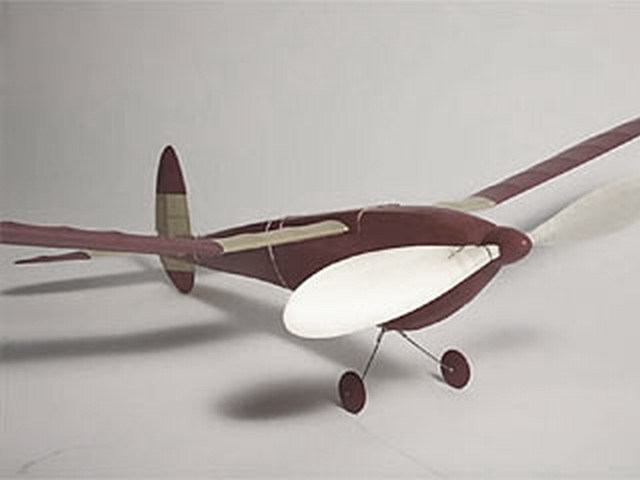 Photos of his completed (red and blue) Clodhopper model (electric RC conversion) are thanks to MarcoAGuillermo. Note this model has lightweight stringers where the original plan showsa fully planked fuselage.
SteveWMD - 22/02/2013
Add a comment