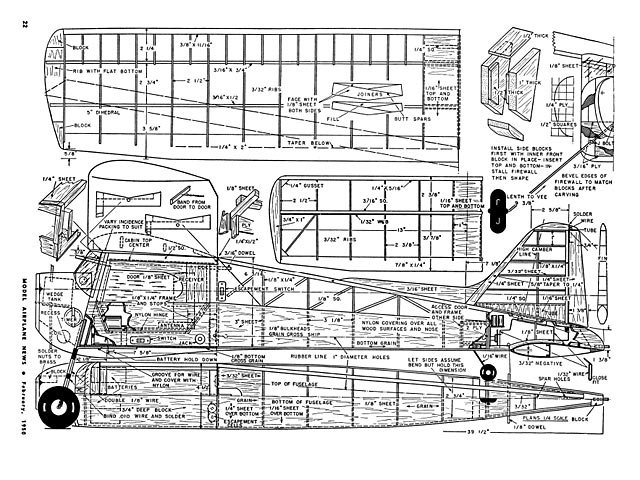 Quote: "THE Citizen is an attempt at a minimum size airplane that would utilize the heavier, long lasting batteries (desirable for the use of a tube having long life, as in the Good Brothers receiver) which commonly are carried by planes 6ft and larger. Primary considerations were smallest size consistent with the above, and with plane visibility at a distance (1/2 to 3/4 mile), and construction that would survive the rugged flying typical of western New England. While the Citizen-Ship radio we used does employ hearing aid B batteries, the weight of the required A's balances things out.

Experience over a year's flying with an Ohisson 60, 6-1/2foot semi-scale job (wing loading 18 oz) had indicated a number of musts for this smaller design. An analysis was made of the Rudder Bug (oz7009) which (with Gene Foxworthy's very excellent twin-tailed job) is the best all-round RC ship in the country today. If the Citizen seems to have been impressed by Walt Good's Bug, it is because any serious effort to design an ideally practical ship keeps bringing you back to the same general layout. However, despite the Rudder-bug motif, the Citizen is a rugged individualist and contributes some worthwhile data on performance and control characteristics at various power and wing loadings to be described.

As the ship's name implies, the receiver and transmitter operate on the Citizens Radio band; Vernon C Macnabb kindly supplied one of his three original test radios for our use. As this is being written a transmitter is before the FCC for possible approval which, if granted, would mean license-free (or more correctly, examination-free) operation. However the Citizen was designed also to take Beacon, Aerotrol, RCH, and similar equipment, and is not limited to any one make of radio.

The first question in designing a new radio control model is "how big?" Since the Rudderbug weighed 74oz gross, it was felt that the minimum weight we could hope to attain with a sturdy small airplane, capable of toting a heavy B battery and not hearing aids, would be 60 oz. (Actually, the finished machine came in at 59 oz.) The 'Bug has a wing loading of 12.3 oz. a square foot. Probably one failing of the 'Bug is that it is too good and can vanish on a thermal. At the Nationals we had noted the remarkable glide of the Good design and had observed Dick Gelvin's job spinning in a thermal in a nearly unsuccessful attempt to get back to mother earth. Presumably, a smaller airplane would have less thermal riding ability but it was decided nonetheless to increase wing loading over the 'Bug by about 2 oz. This gave a 56" wing with a 9" chord. (Consideration had been given to low aspect ratio to increase the rate of sink but too rapid a roll on use of the rudder soon killed the idea.)

A higher power loading was also decided upon. Most radio control jobs now perform with engines throttled well back, which means, of course, that the ships are overpowered or, more aptly, there is more power than can be successfully controlled. The Rudderbug has a power loading of about 247 oz. per cubic inch of displacement. This may sound like a lot to the average free flight man..." 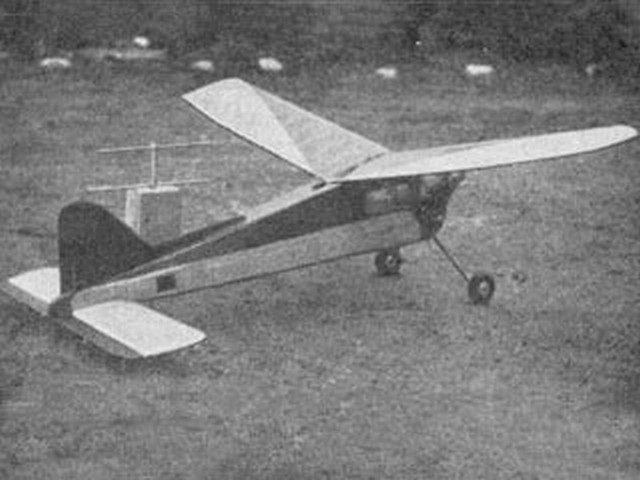