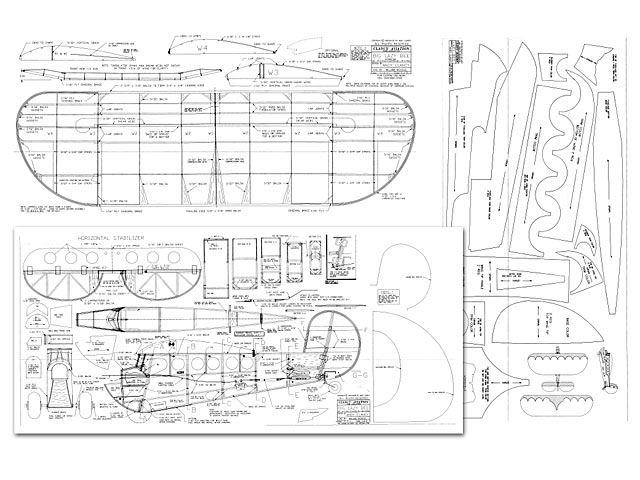 Quote: "The new Big Lazy Bee is finally here for modellers who fly big planes. It has the same amazing low speed flying characteristics as the smaller Lazy Bee. These amazing characteristics are why Cox decided to manufacture the Cox RTF Lazy Bee under license from us. We could go on about tight turns, short take-offs, snap rolls, hands-off stability that gives it the ability to self-recover from any attitude, super low stall speed..."

The Big Lazy Bee is a big brother to the Lazy Bee design that has been on the market for a few years. The original version is available as either a 40 or 48 in span kit and this newer kit comes with either a 60 or 70 in wing. A separate wing kit is also available so that one kit plus the extra wing can be purchased without having to buy two kits. Both variations utilize stick construction throughout with some sheeting and bracing as required.

This review covers building and flying both of the wings as well as using both an electric motor and a glow engine for power.

The kit comes with full-size drawings, laminating patterns, and the trim pattern templates that were used for this article. All of the additional items, such as hardware, wheels, covering, etc, required to complete this kit, are listed in the instructions. The instruction book 'To Build a Bee' which is included with the kit, was actually written for the smaller original Lazy Bee kits. Consequently, although the two designs are similar, all of the dimensions in the instructions are wrong for this version, and you have to refer to the plans and a supplement sheet for the correct information. In addition, there are also some material differences that are shown on the plans. It would be a little easier to build the kit if the instructions were written specifically for it.

Construction: The ribs and the fuselage cabin sides are die-cut and all of the wood is first rate. The patterns for the laminating forms for the rudder and the elevators are included in the kit materials. The forms were made of layers of corrugated cardboard glued together and capped with filament tape. The laminated tail parts are made of four 3/32 x 3/16 balsa strips dampened and bent to shape, one at a time. The strips are glued together with thinned aliphatic resin which sets up quite fast. Plenty of map pins or brads are required to keep the proper form, and all of the strips close together, but the job goes quickly once you get the hang of it. The wingtips are made the same way except the material is 3/32 x 3/4 in.

Once the tips are ready, the wings and tail feathers go quickly. Construction of the wing is simply a matter of building the center and tip sections and then propping up and gluing the tips in place. Either wing has a flat center section, and although they are large, and more pins than usual are needed, construction is very simple. The six-foot wing also accentuates the size of the huge 32-1/2 in stabilizer/elevator.

The fuselage is made by building the two side frames over the plans and then propping them up while gluing in the cross-pieces. There are no formers between sides, which would be a big help, so this part of the construction requires a lot of pins, 90° angles and/or some help, along with some super glue and accelerator. The many assembly drawings supplied for this step are a great help, even though they were drawn for a different model. The available room for the equipment is so cavernous you have to decide where it's best to put the radio and battery pack, if you intend to use electric power. My radio is on a plate just behind the balance point on a line even with the windows, and the power packs sit on the lite ply shelf underneath on Velcro with several inches of moving room available for balancing.

When using electric power, the controller can be mounted on the plate that will also hold the fuel tank, or on another shelf under it. The engine throttle servo is mounted with the others and the throttle cable is put in place during construction rather than leave it out and have to come back later and add it in. I also added in a 'switch, cable, battery' combination that is activated by the throttle cable to keep the glow plug lit during extended low throttle runs. To facilitate transport, and maybe minimize landing damage, the stab/elevator is held in place in its slot with eight #62 bands.

The wing can be mounted with either #62 bands tied together or with nylon bolts and blind nuts. The rudder can be removed by using pinned hinges with one long common shaft. Even the huge wheels can easily be removed; consequently, the entire model can quickly be broken down into a smaller package for transport.

Andy Clancy suggests using Solartex covering material, which he sells, so the model was covered with yellow and then trimmed in red. This is a fuelproof material but I added two coats of 50/50 thinned dope so it would be easier to wipe off the dirt and grass stains. (Unfortunately, the two coats were not enough because the fuel residue resists cleaning.) The fabric finish is not only a snap to iron on, it looks very much like a vintage aircraft from the 30's when completed. This type of fabric material with heat activated adhesive will adhere better if you first paint the balsa with either Balsaloc or Balsarite. It only takes a few minutes and it certainly makes the covering job easier.

The landing gear is simply a straight length of music wire running through the fuselage in a narrow box which supports it. The wire is held in place with rubber bands and goes up and down in the box slot. Clancy Aviation also sells a pair of large and very effective shock absorbers to replace the bands as shown in one of the photos. They also handle the complete line of Trexlar air wheels including a set comprised of a 6 in pair, which are shown, and a 2 in tail wheel. The hatch is a piece of lite ply held in place with three dowels on the bottom and Velcro on top. The two 8-cell packs are also mounted with Velcro and are readily acces-sible. The arming switch is fuse-mounted in a Sermos Snap Connector assembly shown in front of the shock.

Initial flights were done with an Aveox 1412/4Y motor and companion 120L/V2 controller on 16 cells. Both 11 and 12 in props with 16 and 18 cells for power were used and the performance is excellent. This combination was chosen because it is so easy to interchange the Stitzer Aero-Vee MM-1 motor mount with a Sullivan Dynamount engine mount when changing to the K&B 45 Sportster engine. Andy suggests using a soft mount for the engine, and the Dynamount is a perfect candidate for the job.

The plans call for a 2 in dia tail wheel on the supplied coiled music wire that pivots 1/2 in behind the rudder hinge line rather than on the line. I built it this way but then found that the weight of the model on the tail wheel really racked the rudder servo when parked because of the position behind the hinge line. Consequently, the new Sullivan tail wheel bracket was substituted and this works much better. These new steerable brackets are available in three sizes and the design works very well.

The model has been flown with both of the power packages listed above and with both wings with each package. Either way, it's a blast to fly! Using the larger wing does slow it down, particularly in the wind, and it even becomes a little more aerobatic. With either power set-up, it will turn on a dime and really would rather not settle down and land. Performance with the engine is the better of the two because it runs longer and the model is lighter. Conversely, the extra weight of the electric package combined with the 5 ft wing does give better performance in the wind, but the flight time is shorter.

The combined wing and stab lifting area is either 1432 sq in or 1692 sq in, depending on the choice of wing. When you add the area of the flat bottom fuselage, the lift available will outdo most Old-Timers and it flies accordingly. This model will fly very well on any decent .40 to .50-size engine, particularly with a slightly oversize prop and rich-running engine. There are also plenty of electric motors available including most of the Aveox line, Astro's 25 or 40s, Amp Air's twin with good 05s or 075s, Modelaire Tech's belt drive with a good motor, and Hobby Lobby's Megas and Ultras to name a few. Prebuilt laminated tips are available as well as floats, if you are interested. If you want a model that is a little different, try this one; you'll like it." 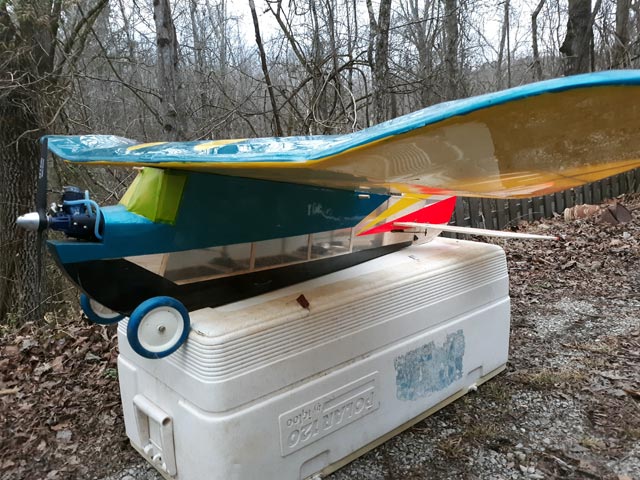