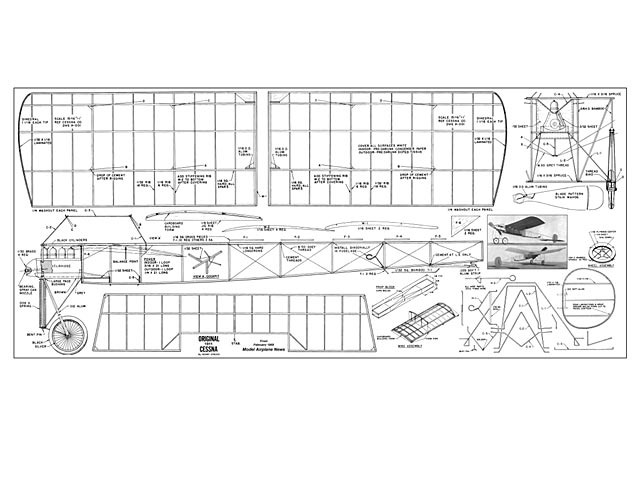 Quote: "The first of the 50,000 Cessna monoplanes was built by Clyde Cessna in 1911. Use of the term monoplane instead of aircraft is deliberate, as from the first, Cessna was convinced that the single wing was the only proper way to support a flying machine.

The model is a reproduction of this original Cessna Flyer, and has probably flown more consistently than the full size machine.

Indoors the model has done 1 min 19 sec ROG under 40 feet of altitude. An outdoor flight of 5 min 9 sec at the Flying Aces Club contest finally lost the model.

To obtain maximum indoor performance, cover with condenser paper, shave down the weight of all parts, especially the tail group to bring the total weight down to under a 1 oz total. Then 5/32 rubber should provide sufficient power and the increase in possible turns to almost 2000 should result in a duration of over 1 min 30 sec.

If primarily intended for outdoor flying, weight is not so critical, as altiutude will determine the duration, rather than prop run..."

Article pages, text and pics, thanks to RogerClark. Scans originally uploaded by 50+AirYears in September 2011. Also alternate version of the same plan at 26.4in wingspan. 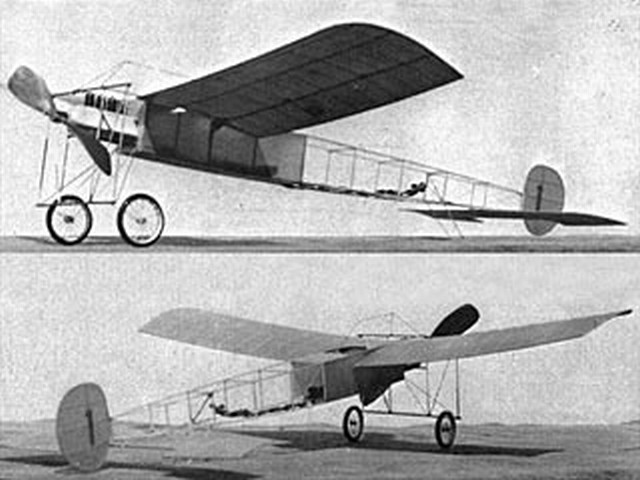 Hi Steve, I built an RC electric park flyer version of this plan, enlarged 150% to 39 inch wingspan [see more pics 004, 005]. It is a nice graceful flyer, I have a half dozen flights at this time. Power is a small Turnigy outrunner on 2S 850 mAh Lipo battery and 12A Turnigy Plush ESC. Biggest mods were providing for the moveable elevator parts, and carbon rod for the sliding gear leg parts. Model has working shock-absorbing gear and some homemade wire wheels. Weighs 9.5 oz with battery. Thanks for the great website – just thought I’d let you know it was a fun build.
JohnWitt - 26/10/2013
Hi Steve, I thought you might like an update on the Cessna. I have the wire wheels on now and today was able to get some flying shots of the model [see more pics]. It’s become my favorite school yard bird. I’m spending some time now browsing through the plans trying to decide what to build next. Thanks for all your good work. Best regards,
JohnWitt - 02/12/2013
Steve, After I had sent off the cleaned article on the 1911 Cessna I started to have doubts about the wingspan – my article did not match your plan #279 (which I think came from Planeman, uploaded in July 2010). The latter has a span of 26.36” and the article as I submitted has 24.65”. So I did some digging on the internet. Steve Sweeney had trouble with the span - see http://www.lisf.org/home/wwf_free_flight/Building_and_Flying_Clyde_Cessnas_1911_Monoplane.pdf in which he calculated your plan as 28”. I think he may have got that wrong, since measuring your pdf, I get the fuselage width 1.9” plus each wing panel 12.23” comes to 26.36” A guy in New Zealand (dunlopp@cpit.ac.nz) says on his webpage http://www.geocities.com/aerohydro/mfm/post1910.htm that he has a copy of the plan and the span is 20”. The Academy of Model Aeronautics lists it as 22” (http://www.modelaircraft.org/files/C.pdf). I then found a document which appears to have been published by or for the Cessna Company – a Cessna Genealogy Chart at http://www.jbaviation.com/assets/files/Cessna%20Genealogy%20Chart.pdf This gives a very precise span of 25’ 4”. Our magazine article plan states that the scale of the model is 15/16” = 1’ (and also quotes a Cessna drawing number). If you apply this scale to the real-life span you get a model span of 23.75” This looks the most likely answer, and I have rescaled the plan pages of the article on this assumption.
RogerClark - 05/06/2014
Add a comment