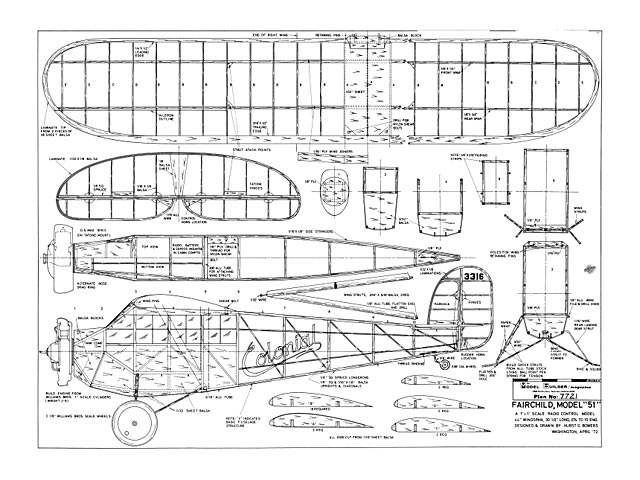 Quote: "Fairchild 51, by Col Hurst Bowers. Just an old cabin monoplane, but when American aviation was making its mark in the 'Classic Era' this ship always happened to be around. It's a triple-threat model too. With little alteration to the plans it can be built for radio control, free flight rubber, or free flight gas.

That famous statement of Winston Churchill that never have so many owed so much to so few, could be paraphrased to apply to the boxy old Fairchild Model 51. Its pioneer work with air mail operations, early domestic scheduled airline service, route surveys of Latin America's future air ways, photographic work, bush flying, and a host of other tasks, made possible what we consider routine in civil aviation today.

For years I have seen this aircraft pictured in its various roles in pioneer aviation and its only noteworthy characteristic was simply a lack of any prominent feature. It was just one of those old cabin monoplanes which were so prevalent during the late 1920's and 1930's, but there was something different. Its lack of flamboyance made accurate identification difficult and lo-cating drawings was almost an impossible task, but I acquired such a fascination with this ancient machine that I resolved to model it. After all, here incorporated into one basic airplane was one of the most perfect examples of 'Aeronautics Americana' to be found.

I started with a J Triggs painting done for the Phillips 66 Historical Aviation series, which features a Fairchild in the livery of Colonial air service plodding along over the Mohawk Valley. From there I found a gold mine of data in The Antiquer, a magazine published by the Antique Airplane Association, and in US Civil Aircraft (Vol.4) by Joseph Juptner. Shortly afterward I located a 'real live machine' in storage which I was permitted to study and photograph.

Armed with this material I was able to develop the drawings accompanying this article, which are a scale of 1 inch equals 1 foot, giving the model a 44 inch wingspan. Although 100% accuracy is not claimed, the drawings are reasonably accurate and certainly adequate for stand off scale. Although my model is powered with a Cox .09 and stressed for radio, it is sufficiently light to be flown in free flight scale, and with a few minor weight saving changes here and there, it could even be flown on rubber power. How's that for versatility? Just like the prototype.

Now let's get underway and start putting pins into the workboard. The construction is quite conventional, so I will not burden you with how to connect stringer X to upright Y. Instead, I will only touch on the areas where a brief explanation is necessary. First, study the drawings and note that the basic fuselage frame to be constructed on the plan is outlined with small 'V' marks. The bottom third of the fuselage under the cabin is formed by the formers, as shown on the cross section views of stations 2,3, and 4. Covered with hard 1/32 inch sheet balsa, this makes a clean and very strong structure as well as being quite light. You will note that the longerons are 1/8 square spruce. This is the secret of the weight and strength of this model. Although you may substitute balsa here, my recommendation is to find some good SIG spruce and use it - you'll like it.

The landing gear is simple and func-tional, as well as being scale. I made the shock struts from telescopic aluminum tubing with small ballpoint pen springs inside, and strips of paper to represent collars on the outside. This, along with the Williams Brothers 3-1/8 inch Old Time Scale wheels goes to make the landing gear highly accurate. And while speaking of Williams Brothers, use their 1 inch scale Wright J-5 cylinders to make up an engine to camouflage the power plant you use. Here is where the ingenuity of the builder comes to play, but with a little time and effort you can produce a real masterpiece. If you can't spare the time, just hide your engine behind a thrust plate under a drag ring, and you will still have a scale version, for some owners did add these innovations.

The wing and tail are conventional and should present no problems. I built my tail outlines from 1/8 inch reed purchased in the basket weaving department at the local craft shop. You younger builders won't be familiar with this material, but at one time, reed or bamboo was the standard stock for curved wingtips, tail outlines, etc. I would recommend the laminated balsa method which I have shown on the plans, however, as reed will not retain its form nearly as well, and has a greater tendency to warp.

You may use anything from Japanese tissue to the new press-on, heat shrink materials for covering, but I used silk, for it just seemed the thing to use on a model of this vintage and construction. Pick any color combination and chances are it was used on a prototype. I used the old Army Air Corps olive drab and yellow for I understand several of these Fairchilds were used as military transports. I have been unable to verify this but I like the old Army colors so much I used them anyway. The Colonial version was all silver with black lettering, numbers and details. This was also true of the version used by PANAGRA, except the lettering and numbers were green.

For R/C flying, any of the new light proportional gear is excellent, but I am using 3 channels off the reliable old Controlaire by World Engines. This model would also fly well on pulse rudder if kept light and powered with a good .049 engine. What ever you use, it will be a slow stable replica of this obscure, but outstanding aircraft." 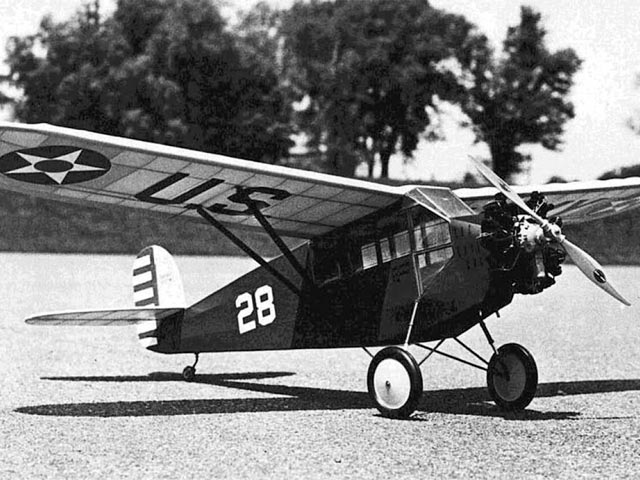