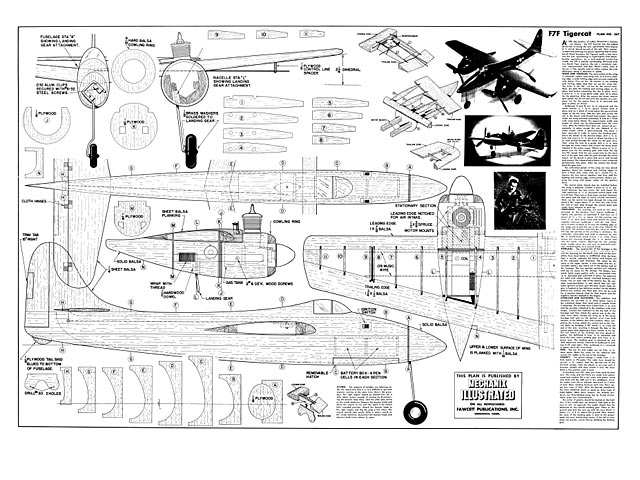 Quote: "Here is a Grumman F7F Tigercat from the Mechanix Illustrated, April 1946, full size plan # 367. A thread in r/c groups awhile back referred to this plan as being of low fidelity to scale. I would certainly agree but it is still an old plan worthy of restoration in my opinion. I feel I really saved this one from oblivion. The plan was very brittle with fold lines and heavy discoloration. I had it gently scanned in large format and then digitized it. I did considerable cleaning and rebuilding at all fold marks as they were severe. Although this is a stand way-off scale model it does give a sense of the sleek lines of this aircraft."

AS THE big brother of LeRoy Grum-man's famous 'cat family,' the F7F Tigercat has the added distinction of being the only operational twin-engine US carrier-based aircraft of the war. Fast, maneuverable and packing fire-power equaling that of land-based attack bombers, the Tigercat made a late entry into the war, specializing in night-fighter and attack-bomber operations.

As a twin-engined control-line model, the F7F is equally outstanding. Powered with two Bunch Tiger engines, the job is extremely realistic, maneuverable and fast. What's more, once in the air, it flies equally well on either engine, the only difference being a decrease in speed.

Before starting the construction, enlarge the plans or else take advantage of the MI Reader Blue-print Service in obtaining full-sized drawings.

Wing and Nacelles: The construction of the wing is relatively simple, consisting only of a heavy leading edge, a wide trailing edge and covered completely with balsa. First cut the rib notches in the leading and trailing edges and then cut out the wing ribs. The holes in ribs No. 1-4 are for the control lines. Next, pin both the leading and trailing edges on the plans and before cementing the ribs in place, insert a piece of 1/16 scrap balsa under each rib to allow for the planking. After the cement has dried. remove both panels but do not join until the nacelles are complete. Cut the line spacer from 1/8 plywood and glue in place, as shown.

Bulkheads K and M are 1/8 plywood and the motor mounts 1/2 x 3/8 in spruce. Cement both in place and cut a block of scrap balsa the approximate shape of the tail cone. Add the cone and anchor the coil to the mount with thread and cement. The space under the wing between bulkheads K and M is filled with scrap balsa blocks, the approximate width and angles of which can be determined from the front view..." 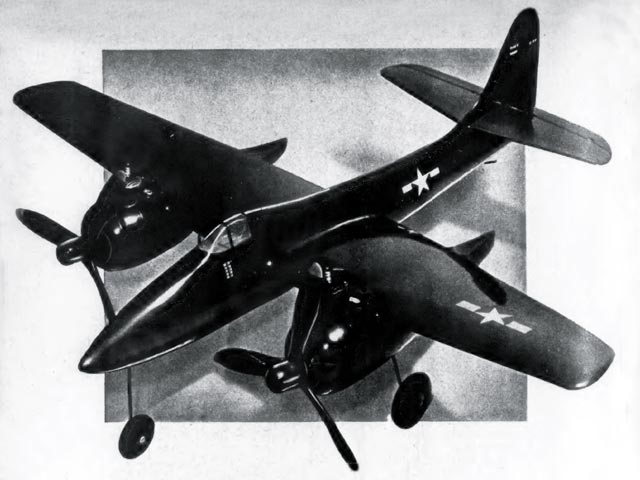