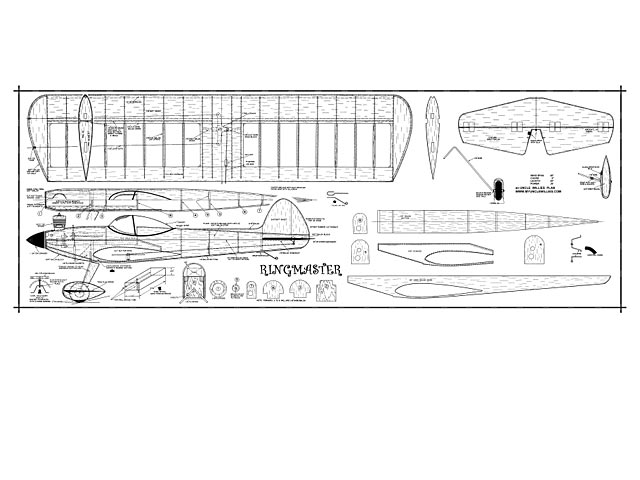 Quote: "The Ringmaster is a tried and proven stunt ship that originally took to the air in the summer of 1947. In the four years that have passed since that day, we have built many of these ships and with some changes, structurally and aerodynamically, have produced the version you see here.

This design has been scaled up for the big 'Sixties' and down to the tiny 'A' jobs. Regardless of the size, it has proven its ability. Speed, strength, ap-pearance and full-pattern ability are its features. Although designed for the K & B 29, the version shown on the drawings has also been flown with the McCoy 36 and will turn in a very creditable performance when flown with 0 & R 23's.

Construction is conventional and quite simple, even for the less experi-enced. The wing is of the single I-beam spar type, with sheet covered leading and trailing edges. Fuselage construction is a glorified box with flat sides and bottom and a rounded, planked top. Engine mounts that extend two-thirds of the wing chord, offer that much-needed strength in a crackup.

Fuselage Sides: Select two pieces of 1/8 hard sheet balsa and cut out the fuselage sides. Two nose reinforcement pieces are made of 1/16 plywood and cemented to each side. Hardwood mounts, 3/8 x 1/2 in, are cemented in place and additionally strengthened with #2 flat-head wood screws, through the mounts and into the plywood. Cut out each side for the wing and lay both halves aside.

Wing: This part of the airframe, since it takes all the flight loads in those violent manuevers, requires a great deal of care to obtain maximum strength and efficiency. Cut out 20 ribs from 1/16 hard sheet balsa and sand to shape. Two pieces of 1/8 x 1/2 hard balsa strip form the upper and lower halves of the I-beam spar. Pin one piece of 1/8 x 1/2 to your workbench and cement the ribs in place. Before allowing the cement to harden, cement the lower half of the trailing edge to the ribs and correctly align the assem-bly. After sufficient drying time has elapsed, the top half of the spar and the leading edge may be added..." 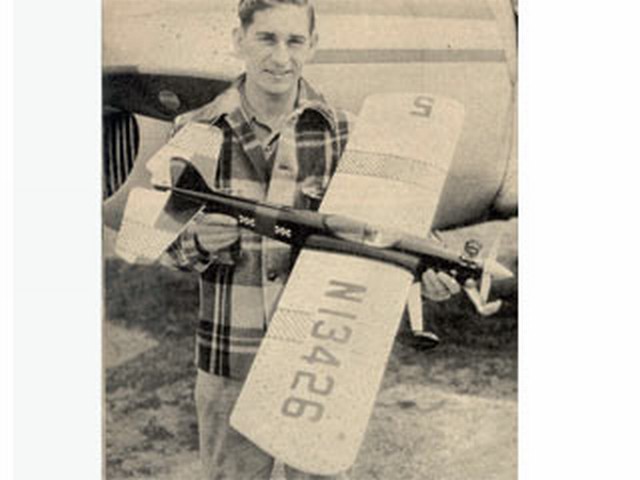