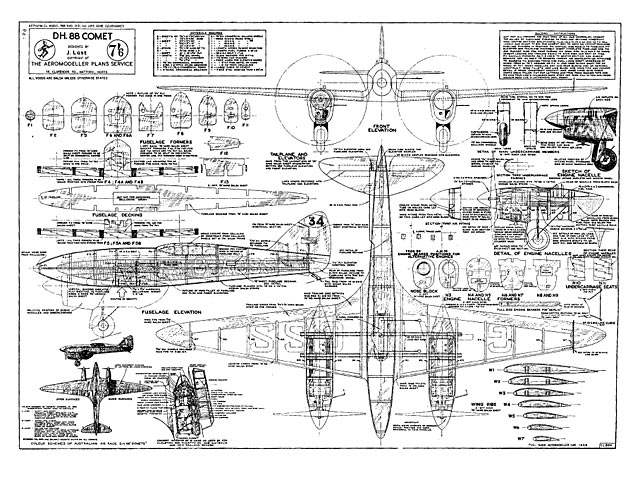 WHO CAN RESIST this 29 in span controline scale model of the famous England-Australia air racer for two .75 to 1 cc engines? The original weighs 19 ounces and flies at approximately 45 mph on 35ft lines with a pair of Allbon Merlin .8 cc diesels. Construction has been designed by L Last specifically arranged for a very high degree of strength combined with simplicity and provided the builder has the experience of making at least one control-line model, he should find absolutely no trouble whatsoever in producing a perfect replica.

Exact colour and cockpit details are incorporated on the plan and alternate engine bearer positions quoted for the popular Frog 80 and A.M. 10 engines.

Construction is commenced by adding the top halves of all fuselage formers bisected on the horizontal reference line to the fuselage decking. Make up the bellcrank assembly and the wing centre section box of formers F4, 4A, 4B, 5, 5A, F6, 6A and two F13's. Fit bellcrank mount into the wing section box, firmly attaching the assembly to fuselage decking. Now add the remaining bottom halves of the fuselage formers and attach the push rod complete with elevator control horn and leadout wires to the bellcrank. Add the vertical side panels to the fuselage formers and attach the completed tailplane-elevator assembly, connecting the horn to the elevator. Now complete the fuselage sheeting. Add the fin and rudder, tail skid and the rear fuselage cone.

Fit ribs W1, 2, 3 to the spars and leading and trailing edges and then fill in with the remaining ribs. Add engine nacelle formers N6, 7, N8 and 9 to the spars and ribs, cement the bearers in position and coat liberally with shellac and knotting. Now fix the engines and tanks, add the under-carriage and sheet the undersurfaces of the wings. Fix nacelle nose blocks and N3 in position by means of N1, N2 and two strips of 1/16 sheet.

Cover top surfaces of the wings with sheet, then complete the engine nacelle sheeting and wing root fillets. All that remains are the cockpit details and wingtip guide, covering, colouring and decorations.

Be sure to check engines thoroughly before attempting that first flight. Providing the outer engine is started first and the inner tank is full at launching, one should have no single-engine troubles, for the Comet performs well on the port engine alone, once airborne... " 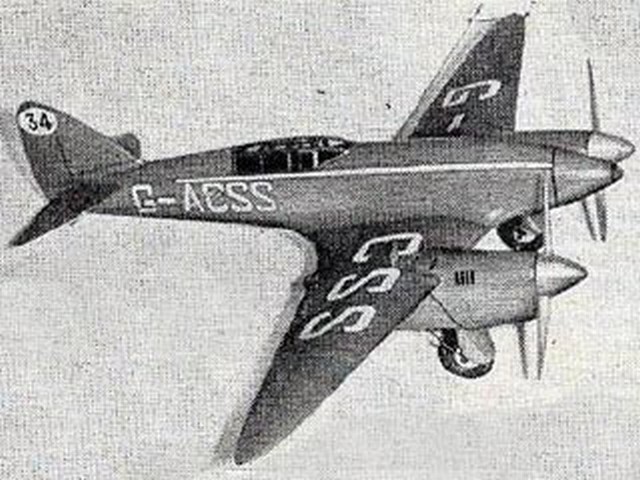