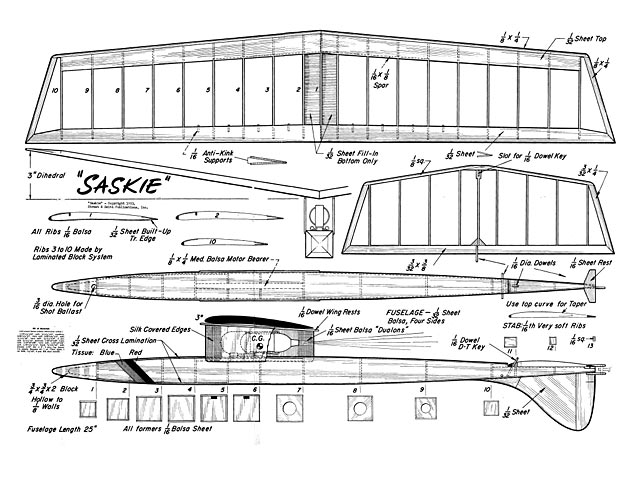 Saskie was designed and built expressly for the First International Jetex Eliminations held in Windsor, Canada. It won handily and represented Canada at the International Competition held in the United Kingdom (ably proxy flown by Peter Cock of the experimental division of Wilmont Mansour & Co Ltd).

In designing this model, the basic consideration was to have an all-weather aircraft. Yet in Jetex, weight above all determines the performance. These opposing conditions imply that a compromise must be made, and that the best efficiency in structure design must be had. Saskie won the Elimina-tions in winds as high as 40 mph and certainly proved itself a match for mishaps. A nearly disastrous accident occurred on its first flight, however, when it managed to land in a growth of young trees. Tangled in one tree, it was being thrashed by the neighbor-ing tree swaying in the wind. In fact, I located the model by the noise it made. The left wing was broken in two by this misadventure, and I had doubts about the remaining flights. But the sheet type construction of the wing re-pairs very easily, and the repaired wing is still being used.

As far as the weight is concerned, the model proved very satisfactory at 2-3/8 ounces. Flight under power is quite fast, and as a result the climb is high. Thermals definitely get a chance on this job. Still air flights vary, of course, but two minutes are about average; per-haps a few more flights over than under.

Strangely enough, Saskie's layout is a direct descendant of a Wakefield model - that is, with respect to the inverted rudder and the Dualon wing mount. I might say the inverted rudder is not new, for it has been a common enough feature of European towlines for years. I've used it primarily for mechanical reasons. A fixed rudder and a popup stabilizer type dethermalizer can be employed in this manner. The Dualon wing mount is simply the easiest way to attain the desired wing, fuselage and motor relationship. This relationship was used on my first original design. Subsequent models of the standard 'wing over - motor under' fuselage type seemed to lack the stability of my first design; so I reverted to it.

Jetex flying is a refreshing addition to our hobby. It embraces a lot of the considerations of rubber flying. Weight in design and trim in flying are much similar. But the time-consuming details of propeller and landing gear construction are out. The fuel proofing problems of gas jobs just don't exist. From many angles Jetex duration has a lot to offer as a complement to our contest events.

It seems to me that the wing of an aircraft is actually the most important part - for do not all other parts exist only that the wing may do its work efficiently? The 344G airfoil presented in Dr Lippisch's series April and May 1950 Air Trails is stated to be a pure laminar section for low RN. Also a really fast one, to permit the highest climb by virtue of greater speed while under power. As far as the glide is concerned, a wing loading as low as this model's must result in an exceptional glide. The minor difficulty with the section is that it is undercambered.

A fairly low aspect ratio wing is used. This helps reduce total weight. And tip losses are reduced by using a tapered planform plus a simple raked tip. The effectiveness of these tips was illustrated to me by an accident with a new Jetex 350 model. Extraordinarily clumsy handling caused one raked tip to be snapped off quite cleanly. Thinking it would matter little, I launched the model and it spiraled in. Without hesitation I reloaded the motor, set the rudder against the dragging wing tip and let it go again. The rudder held it out of the spiral only slightly. Yet, in ordinary conditions the model would have responded sharply to that much rudder. Obviously there was really a difference in drag produced by the square end and the raked tip.

This tip, of course, originated in the early days of aircraft. At that time it was the best compromise between easy construction and efficiency. I think it still is for model aircraft.

To construct the wing, carefully pin prick out rib #1 into 1/16 medium soft stock. All other ribs are 1/16 very soft stock. Ribs #2 and #10 are plotted on the plan and are used to make ribs #3 to #9 inclusive by the laminated block technique. However, it is best to make up separate blocks for the left wing and right wing because of the taper..." 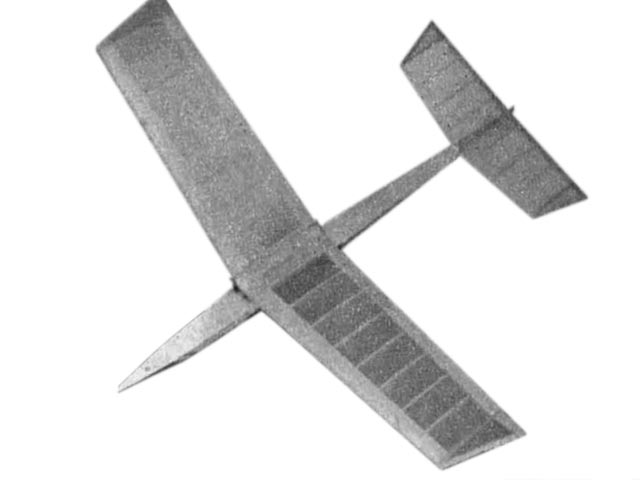