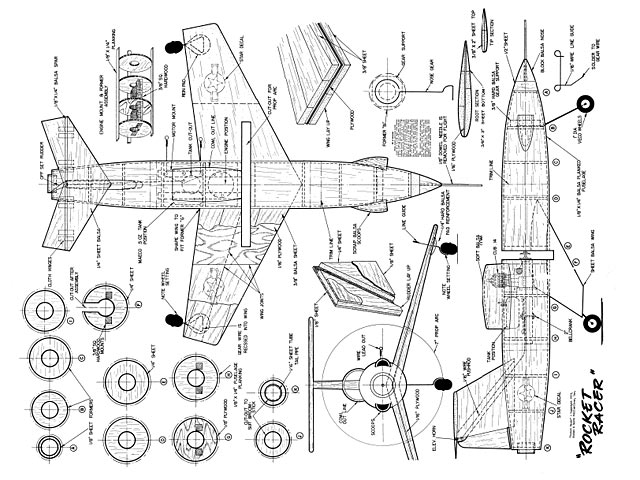 Quote: "This 'broomstick missile' looks like the real thing! You'll be the sensation of the city, the terror of the town, with this 'un. Rocket Racer by Paul J Palanek.

Our missile is not intended for the devastation of a potential enemy. To the contrary, its concept was to give the R/C fan pleasurable hours of building combined with flying enjoyment. Since it is designed for R/C it is truly a 'guided missile.' We hit upon the idea whereby the fuselage should be built over a rod acting as a crutch. A broomstick Is the most common stick found in the home, so we chose one.

That we have something different in the mounting of the Cub 14 is quite evident, The prop arc splits the fuselage and a small portion of each wing panel. We did this to keep the design down in bulk. However, we could have employed a duct fan or a blower system of propulsion but this would give the Rocket considerable bulk, particularly in the fuselage. With the engine mounted as is, the design is kept clean and considerably more proportionate to actual design.

Just a word about the wingtip mounting of the main gear. With careful note given to the drawing and the photos the assembly of the gear will be a simple matter. The gear wire is bent in such a manner that when mounted the wheels have considerable toe-in and camber. Utilizing this method will permit the most severe landings to be absorbed by the gear with no resulting damage. As experience will show, the gear can flex in two directions instead of the usual one.

The fuselage is number one on the building parade so secure a broomstick of not too large a diameter - about 7/8 in. All formers are shaped as shown on the drawings..."

Article pages, text and pics, thanks to MichaelR. 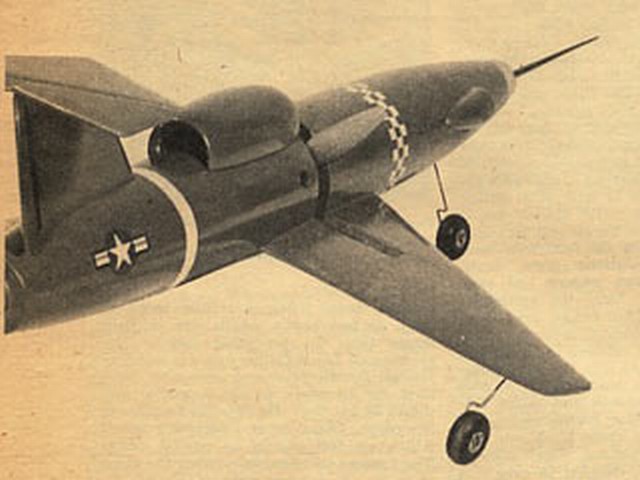