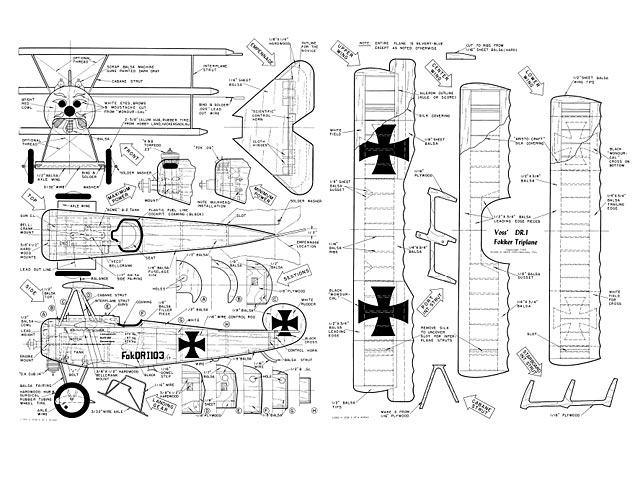 Quote: "The most glamorous and widely publicized German airplane of World War One is undoubtedly the Fokker Triplane. This tiny scout was used by the vast majority of German Aces including trdeti kichtholen, Voss, Loerzer, and Goering. It appeared along the Western Front in a wide variety of colors ranging from gaudy personalized markings to the standard 1918 lozenge-hexagon pattern.

Although slightly slower than the other' fighters of its time the 'Fokker Dr-1 was extremely maneuverable- in the hands of an experienced pilot it became a very dangerous opponent, In view of the fact that the Triplane was difficult to fly it was seldom assigned. to the novice or mediocre pilot. Very few Staffels were exclusively equipped with the Triplane, the Dr-1 was invariably mixed with several Albatros or Pfatz scouts. The very fact that it required an expert pilot to effectively utilize the advantages of the design caused the Triplane to enjoy a relatively short operational existence when compared to other planes of that time. The fact that wing tip skids were often fitted to protect the wings during landings and takeoffs attests to the difficult handling characteristics of the Dr-1.

The tiny 830-lb Fokker Triplane made its appearance in August of 1917 and, partially due to the success of Werner Voss, it was soon sought-after by all of the leading German Aces. Powered by an Oberursal rotary engine of 110 horsepower, the Dr-1 attained a speed of 122 miles per hour. Wings were cantilever with no external braces or wires.

Approximately six hundred Triplanes were completed: about one fifth of these were in action at any one time. The Dr-1 was one of the best 'dog fighters' of the war and more than a match for the SE-5 and Spad when properly handled. Standard armament consisted of two Spandau machine guns mounted just forward of the cockpit.

If the reader desires, he can duplicate the first Dr-1 flown by Baron von Richthofen by painting the entire plane bright red except the cowl and rudder which should be white, The crosses, on white fields, are located as shown an the Voss machine and are the same type. The serial number was FOK. F 102/17. This is not the triplane in which the Baron was killed, it is the one in which he scored numerous victories.

Any glow plug or diesel engine of from .09 to .23 cubic inch displacement can be used in this model. The smaller engine will provide superbly realistic flying but is recommended only for the experienced flyer. The .23 will pack plenty of zoom into your Dr-1. We consider a .15 size to be ideal for this 220 square inches wing area model.

Construction begins with the wings which represent the ultimate in sim-plicity. They require no dihedral or sweepback and, being of constant chord, they have only one rib shape. The rib spacing shown on the plans is exact scale and is recommended. Trace and cut the wing ribs to shape and cement them to the leading and trailing edges directly on the plans. Add the rough cut wing tips and upper wing aileron extension. When the cement is dry trim the leading and trailing edges and tips to shape with a sharp knife such as an X-acto No26 blade. Sandpaper thoroughly and cover the wings with Aristo-Craft silk using a mixture of clear dope and cement as the adhesive. Apply about four coats of clear dope to each wing and set aside to dry thoroughly. 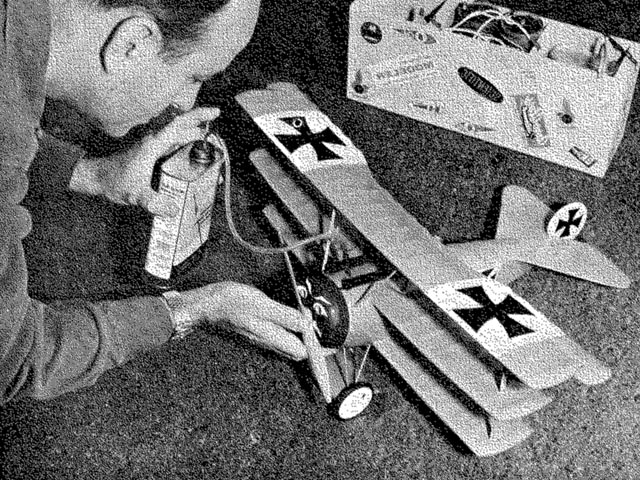