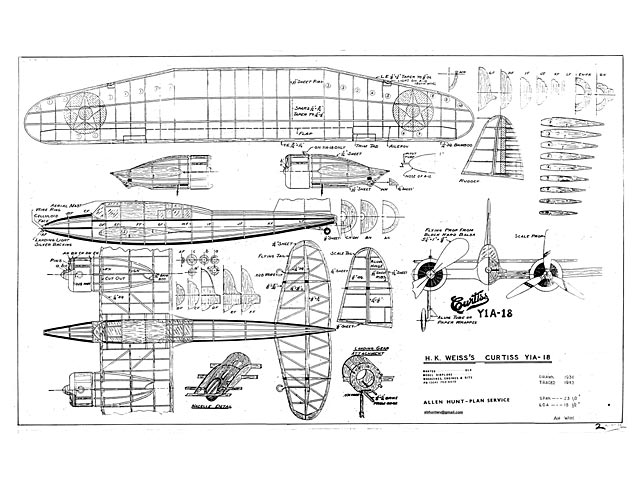 Quote: "Developing a total of 2,000 hp in her Wright Cyclone engines, Curtiss' new, deadly Army attack ship, the A-18, is rated among the fastest twin-motored military machines in the world. Actual details as to her performance and armament are still a military secret, but you can bet she's no slouch when it comes to speeding her gun-bristling form through the air. Nor is Herb Weiss' model of the A-18 any slouch, either - as you'll quickly discover when you line up his plans and construct it. Build the Curtiss A-18, by Herb Weiss.

KNIFING through the air at over 300 mph, the Curtiss A-18 attack plane is one of the world's fastest twin-engined military jobs. It might even be possible to class it as the fastest, were it not for the secrecy surrounding modern war planes which prevents us from making any accurate comparisons.

The A-18 started out in life as the XA-14 experimental model, featuring an all-metal fuselage of monocoque design and a monospar wing of fabric and wood. It was powered with a pair of 825 hp Wright engines. (Three-view plans for the XA-14 were printed in the May issue of FA for our solid model fans - Editor).

Service ships developed from the basic XA-14 design were built to fill an Army order amounting to $1,259,000 and were designated the Y1A-18's. They were powered with 1,000 h.p. Wright G Cyclones. By the time this appears in print, the ships will have "come into their birthright" and will be known as full-fledged A-18's. A multi-place ship, the A-18 shelters its pilot and gun-ner in cockpits with transparent hoods. The landing gear is retractable, of course. The craft has an extremely long range and is well able to raid enemy lines at very low al-titudes. Wing-span of the new plane is 59 ft 6in, and the length is 40 ft 6in.

Our model of the A-18 is unconventional, in that motor sticks have been dispensed with. At first glance this might seem to be a foolish omission, especially when it is considered that the stabilizer must withstand the full tension and torque of two motors. However, the original model, braced as shown in the plans, proved quite strong enough for these imposed stresses. The chief precaution to be taken in building is to make sure that members meet cleanly at each joint, and that all cementing is done thoroughly and carefully.

Begin construction of the model with the wing (Plates 3 and 4). Either make a universal plan for the left half of the wing - which is to be built as one piece with the right half - or simply transfer the dimensions with a ruler. For a flying model omit the even numbered ribs (Rib No. 1 is on Plate 2. The others are shown on Plates 1 and 3). When the wing is assembled and the cement has dried, cut across the rear spar with a razor at ribs No. 1, and give each side of the wing two inches of dihedral at the tip..."

Update 24/07/2015: Replaced this plan with a clearer copy on a single sheet, thanks to AllenHunt, AugustaWest. 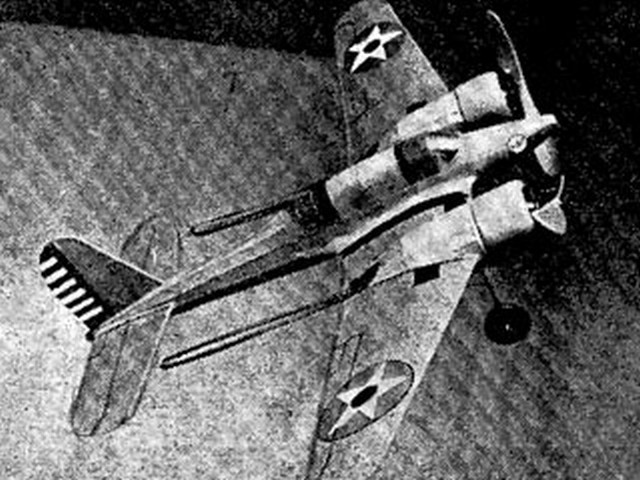