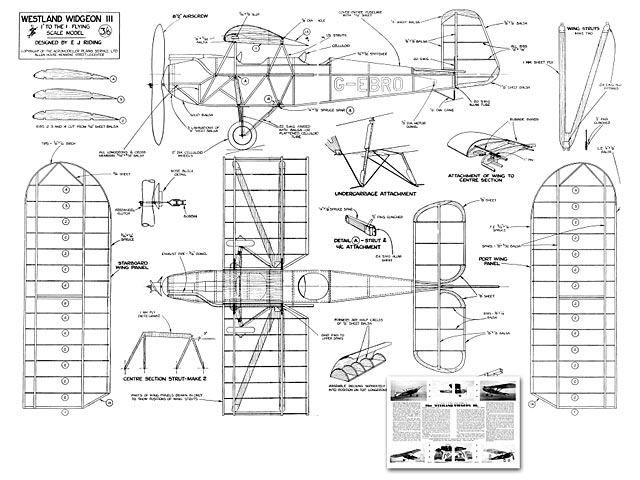 Quote: "The Westland Widgeon III was developed from the Mark II version of 1924 and was one of the few examples of the parasol monoplane in this country. Produced in the early part of 1927, the Mark III version distinguished itself at several flying meetings throughout the country during that year. The prototype machine, G-EBPW was wrecked as a result of a collision with a Blackburn Bluebird during a race at the Bournemouth Whitsun meeting in June 1927, the pilot, LP Openshaw being killed. The first production machines were numbered from G-EBRL to G-EBRQ and were fitted with ADC Cirrus II engines with the exception of G-EBRQ, which had an Armstrong-Siddeley Genet.

The machine from which the model was copied G-EBRO was registered on August 6th, 1927, and had the manufacturers serial number WA 1682. For many years it was owned by the Westland Aircraft Co. and used as a demonstration and service machine, after which it passed through the hands of several private owners and became a club machine with the South Staffordshire Acre Club at Walsall, where the accompanying photograph was taken in 1936. It was later sold to a private owner at Gravesend and at the out-break of war was owned by Mr A Humble-Smith of Romford.

Structurally, the machine was of orthodox design, the fuselage being of the familiar spruce and plywood box construction with a welded steel tube engine mounting. Dual controls were fitted and the parasol wing arrangements made entrance very easy, the front cockpit being provided with a small door. The wings were also of wooden construction with box spars and spruce ribs the whole wing being fabric covered. Full-length ailerons were fitted and they differed from the rest of the airframe in that they were constructed from aluminium and duralumin. The wings folded about the rear spar attachment and were supported by a pair of steel tubular Vee struts. The centre section, containing a 15-gallon petrol tank was supported on four sets of inverted Vee struts and the under-carriage was of a new pattern embodying telescopic steel tubes in conjunction with coiled steel compression springs. The original machines had non-split axles and one set of radius rods attached to the bottom of the fuse/age at the engine bulkhead. Later models had a modified divided type similar to that shown in the photographs.

A variety of engines have been fitted including Cirrus II and III, Gipsy I, Hermes I and Armstrong-Siddeley Genet II. The performance with the former was : top speed 110 mph, cruising speed 90 mph, service ceiling 14,000 feet and endurance about 31 hours at cruising speed.

The model. With the exception of the rear end, the fuselage is built along the same lines as the full sized machine. The longerons and cross-members are 3/32 x 3/32 hard balsa and the covering is 1/32 balsa sheet. The curved decking was built up separately on its formers and glued into position..."

Update 14/04/2018: added supplement plan, fullsize, showing diesel conversion (using ED .46cc engine, drawing by RG Grimes) thanks to JJ. Note this partial scan of the plan shows all engine installation details in full. But is not complete in other areas - it does not show all wing parts, etc. Best refer to the main planfile for these details. 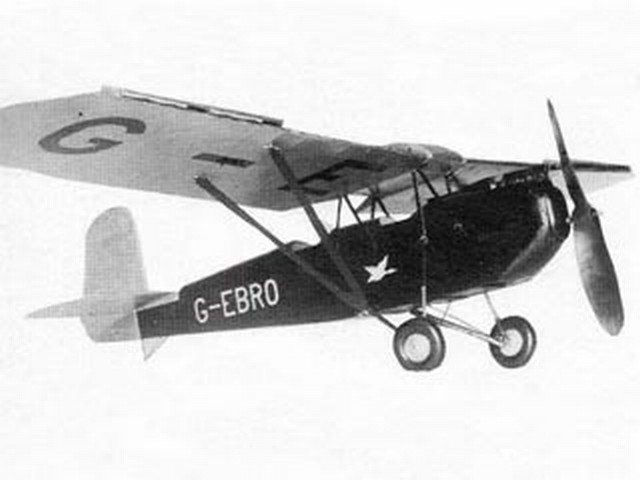