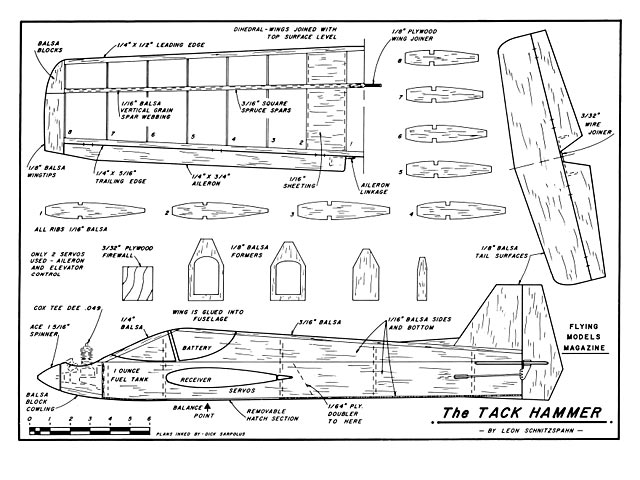 You can never get too much of a good thing. Dick Sarpolus' Hammer (oz10680) design is a good thing. It's light for its size and performs well with a piped .40 or .45. The model has all the vertical performance you could want. Because of its light weight and thick wing section, the model slows down nicely for landings. The Hammer is an honest airplane that goes where you direct it.

Since I have a soft spot for 1/2A models, I had to design my own Tack Hammer, which becomes the fifth version of Dick's Hammer. I'm sure there will be more. The concept was to incorporate as many of the qualities that make the Hammer so enjoyable to fly into a 1/2A version. In order to attain this goal the model was kept small and light so it could perform well with Cox's .049 TD. A thirty-two inch wing span model with elevator and aileron controls was the final de-cision.

A number of features of the original Hammer have been deleted. Landing gear was eliminated because it would only add weight. The D tube construction was replaced with spruce spars and shear webs. The wing was built into the model to reduce weight. Besides, a removable wing is not necessary on a model of this size. Finally the wing was raised to a mid-fuselage position to aid both hand launching and landing. Dick Sarpolus offered the mid-wing position as an option on the Hammer 40.

The side view of the fuselage was used to insure all the components would fit. The fuselage is just big enough for a round one ounce fuel tank, 175 mAh SR battery pack, two micro servos, standard six channel receiver, and the on-off switch. The aileron linkage is offset to one side so the two micro servos can be placed side by side. Set up in this manner, the model balanced without adding any weight. After flying the Tack Hammel; I feel that it has succeeded in reaching its goal. This is a hot little sport model that should only be at-tempted by the experienced flyer.

Construction. The construction of the Tack Hammer is relatively straight forward. If you have built a Hammer, you should not have any problems. The first step is to make your own kit by cutting out all the parts. The one piece wing must be built first. The top spar is made of one length of 3/16 square spruce which is pinned down over the plans. One half of the wing will be constructed first then the plans will be turned over and the other half will be built. Ribs one through eight are aligned and glued to the spar. Next the leading and trailing edges are fitted and glued to the ribs..." 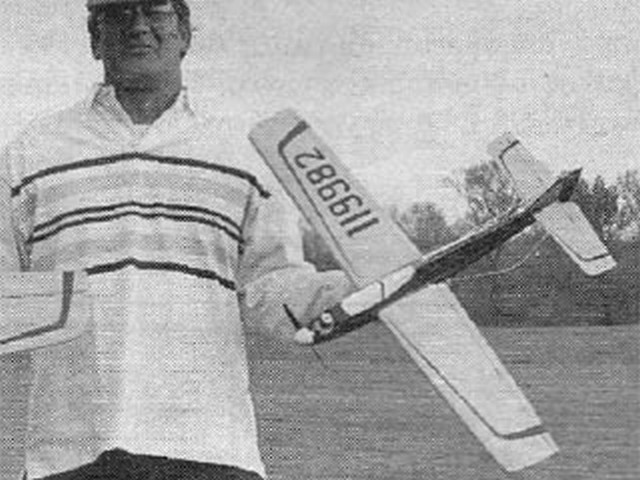