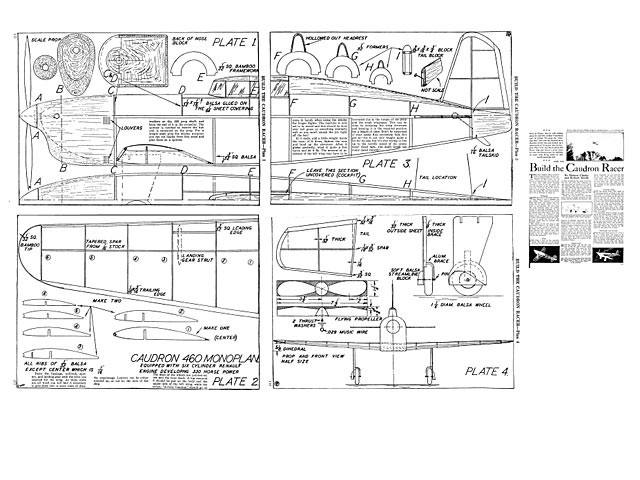 Quote: "Over in France they're still talking about it - and fifty million Frenchmen can't be wrong! We mean the 'whizzing blur' that won the Deutsch de la Meurthe circuit race and chalked up a speed mark of 314 mph into the bargain. The Caudron 460 Racer. And now here's a great treat for you - full instructions for building an exact scale flying model of this record-smashing job. Caudron Racer, by Marion Clarke and Robert Smith.

THE real Caudron 460 is powered with a Supercharged Renault engine developing 330 hp. This first place winner in the circuit race of France averaged better than 275 mph for more than 1,200 miles! Plywood covering is used in the big plane, but only the fuselage of our model is covered with wood, for we do not wish to add too much weight. True to its prototype, the model flies very fast and cov-ers a lot of distance in doing so.

Fuselage: Make the body in the usual manner. Join Plates 1 and 3 together for the outline. The noseblock is carved from soft balsa and shaped and hollowed out as shown. Drill a hole in front to accommodate the nose plug. The long headrest after the cockpit should be carefully hollowed. To add realism to the model the fuselage should be covered with sheet balsa. (You may find it too heavy in comparison with others, but it is worth the extra weight in looks.) The original model had 1/64 stock on it, except the bottom of the fuselage which may be covered with regular tissue.

The sketch of the tail plug is self explanatory. Bend a rear hook of .029 music wire and cement it securely in the plug. The pilot's enclosure is made from bamboo and covered with thin celluloid, and the upper forepart is shaped out of 1/8 balsa. This forms a roof for the enclosure.

Wing: The wing is built in two separate panels. The right half can be traced reversing the left one shown on Plate 2, thus completing the wing structure. Cut the ribs from 1/32 material, except the center one which is 1/16 thick. The leading edge must be rounded on one edge, while the opposite edge fits in the notches of the ribs. The trailing edge is, of course, tapered to a knife edge at the rear, and the wing tips are bent from 1/32 sq bamboo.

When the wing halves are complete they should be glued securely at the center and the middle rib inserted. The amount of dihedral necessary for best flying results is 5/8 in under each tip. The framework is now covered with a light grade of paper, using banana oil as the adhesive. This is now sprayed with colored, or clear dope (as the builder prefers). The authors finished their model in green. An opening similar in shape to the middle rib is cut out of the body covering on either side of the fuse-lage to allow the wing to be slipped through. Once fitted it is glued in the framework firmly..." 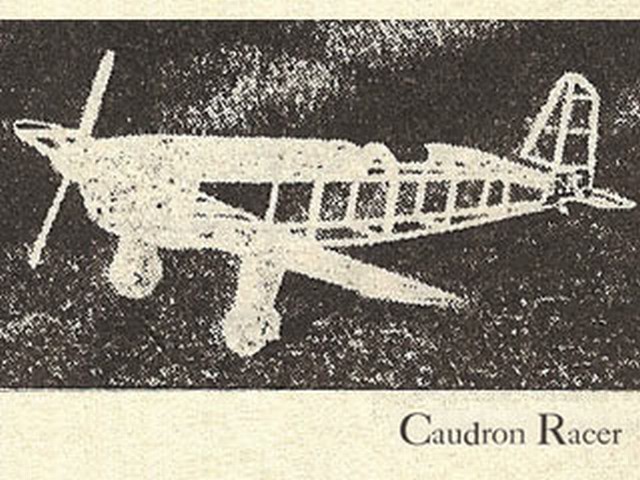