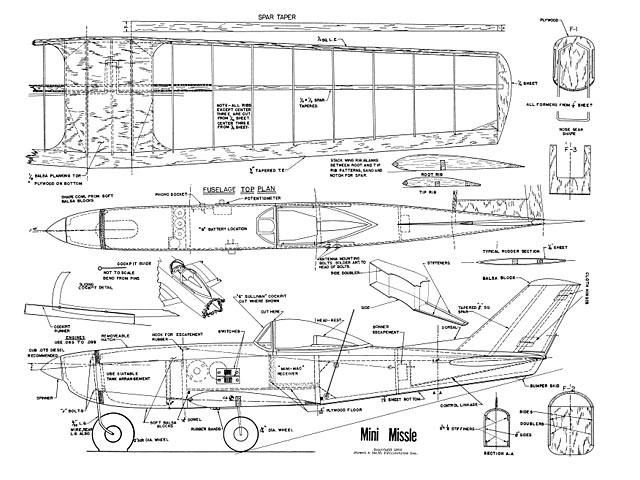 Hobby Helpers plan HH-255. Note this plan is missing a section with the tailplane layout.

Quote: "Tiny but tough, this little R/C design has astounded the experts throughout the Southeast. With good wind penetration character-istics, it's a windy weather flyer. Pint-Sized Radio Control Semi-Scale. Mini-Missile, by Stephen Snyder.

This radio-controlled craft is a fast sport and stunt model. It makes realistic ROG take-offs and is very stable. This model features a sliding canopy which facilitates radio tuning and has a shock-absorbing rear landing gear. It is powered by a Cub .074 diesel. The swept-back rudder design makes the plane stable in the turn. However, if you do not like the sweep-back, all that is necessary is to sweep back the rudder hinge line and make the rudder conventional. The model carries a Mini-Mac receiver which has given excellent results.

Mini-Missile has been a real show-stopper whereever it has been exhibited and flown. Spectators do not believe their eyes when they see the wonderful penetration and flying characteristics. The design is simple and very easy to build. As for its looks and style, the photographs give you a general idea.

The craft is fast and performs almost every maneuver that the present-day high wing models do. ROG take-offs are terrifically realistic. Both original and final contact are made by the rear gear. For this reason, the rear gear is shock-mounted, and not the nose wheel, as is usually the case.

In building the body it must be noted that the balsa blocks are first tack-glued to the side assembly and are shaped and sanded to the outside dimensions. The blocks are then taken off and hollowed out to the inside dimensions, approximately 1/8 to 5/32 of an inch. The block on the bottom of the nose is done in the same manner.

The tapered ribs in the wing and tail are made by placing wing rib blanks between the root rib and the tip rib. The blanks are roughly carved down to the root and tip guide ribs which are made from 1/8 sheet. Stab construction is similar.

Probably the most difficult construction detail is that of the planking on the bottom of the wing. The best way this can be explained is to say that the planking goes from the bottom of the first rib out-board of the dihedral break, across the center section to the bottom of the rib on the opposite wing. Because the planking is flat, to facilitate landing gear mounting, this can be done only in one way - cutting the bottoms off the center ribs so that five center rib bot-toms are in a straight line. This, naturally, will put the planking below the level of the spar. Therefore, the plywood planking is done in two pieces, one for-ward and one aft of the spar. The corners are cracked and bent to make them fit the dihedral break at the leading edge and trailing edge. The spar is left protruding through the planking. Notches are cut in the spar level- with the planking so the landing gear can lie flat. The notches also serve to keep the landing gear from sliding in the mounting brackets..." 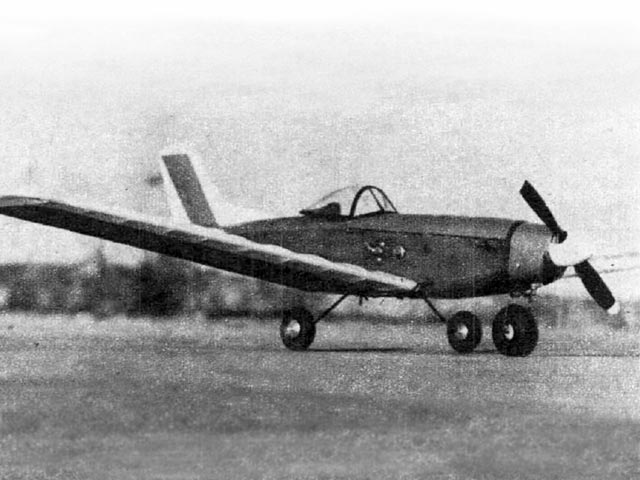