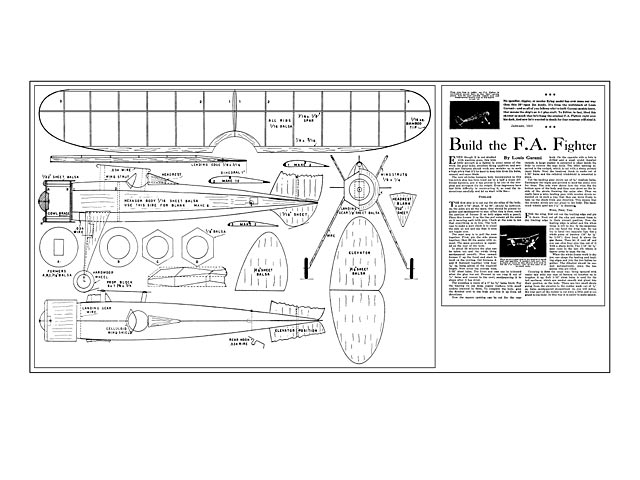 Quote: "No speedier, zippier or sassier flying model has ever come our way than this 20in jim dandy. It's from the workbench of Lou Garami - and as all of you fellows know, that means the ship's an A-1 plus craft. Ye Editor, in fact, liked it so much that he's hung the original F.A. Fighter right over his desk. And now he's worried to death for fear someone will steal it.

EVEN though it is not studded with machine guns, this trim little aircraft is a fighter in every sense of the word. Its good looks, excellent flying qualities, and several new features should work any modeler up to such a high pitch that it'll be hard to keep him from his balsa, cement, and razor blade.

The new all-balsa hexagon body incorporated in this top-notch ship has been tried out by a half a dozen different builders, and it has proved to be one of the simplest and strongest for its weight. Even beginners have had little difficulty in constructing it, so read the instructions carefully and let us start with the:

FUSELAGE. The first step is to cut out the six sides of the body. A soft 1/16 sheet, 3 by 36 in, should be sufficient. As the sides are all the same, they should be pinned together and sandpapered to size. After this is done, mark the position of former D on both edges with a pencil. Place this former D on the line and cement all the aides on it securing each with pins. Check at the nose to see that everything is in line. The best way to make a sure check is to stand the side on end and see that it does not topple over.

The next step is to pull the nose together. First, pin the side pieces together, then fill the seams with cement. The same procedure is repeated on the rear of the body.

In about 20 minutes the pins can be taken out and the whole thing sandpapered smooth. Now cement former C up the front and start to work on the cowling. Get formers A and B fastened together with four 1/8 sq balsa pieces of the required length. Now cover the outside with 1/32 sheet balsa. The front and rear can be trimmed after the glue has set. Proceed to cut ring K out of 1/8 balsa and cement to the cowl, sandpapering it to shape after it has dried.

The noseplug is made of a 1 in by 5/8 balsa block. For the bearing we use large copper washers with small eyelets inserted in them. To complete the body, glue the finished cowl to the body and line it up from all directions. Now the square opening can be cut for the rear hook. On the opposite side a hole is drilled and a small eyelet inserted outside. A large washer is cemented in place inside the body to receive the rear hook. The other opening re-quired is the cockpit, which is cut with a sharp pointed razor blaide. Next the headrest blank is made out of 1/32 balsa and the celluloid windshield is cemented in place.

Cut the landing gear struts out of 1/8 medium balsa. Sandpaper the edges and proceed to bend the piano wire for them. The side view shows how the wire fits the bottom apex of the body and then runs down on the inside of the struts forming the axles also. Thus we really have a wire landing gear with wooden struts ce-mented on in such a way that they can move freely to take up the shock from any direction. This means that the wooden struts are not glued to the body..."

Update 27/05/2014: Replaced this plan with a clearer version on one sheet, thanks to Planeman.

Quote: "The Flying Aces Fighter plan was an easy assembly from the magazine page sections and is an attractive little model. I hope some out there will give it a try." 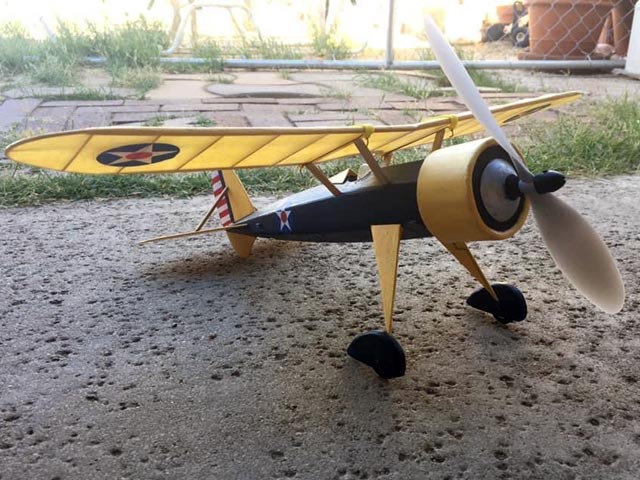