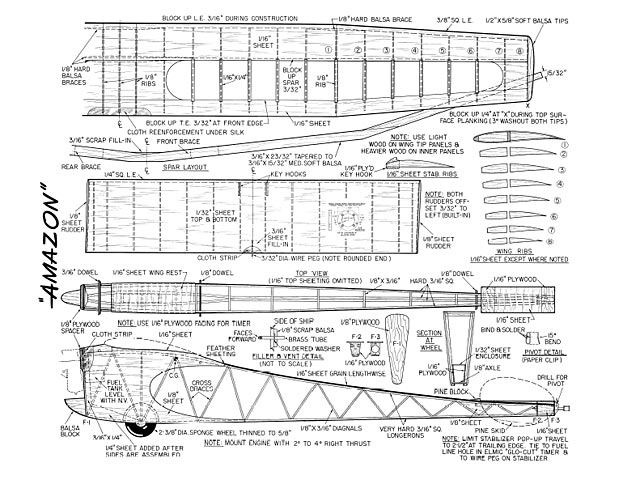 Quote: "Sandra Hill, air-model designer extraordinary, is speaking: Most girls learn to bake an apple pie passably well and have little trouble in snagging the man of their dreams, but with model builders it's different. After the first few dates with my husband-to-be I had to bone up on aerodynamics to show him what a good companion I could be.

After we were married and I had tagged along to a few dozen contests, I marveled at the dogged patience of the number of modelers who could pick up the shattered remains of a brand-new ship, patch it to fly again, only to have the same faulty and disastrous flight characteristics. With the few aerodynamic principles I understood, I felt that I could design a model with more dependable performance.

This turned out to be more research than I had expected, but I finally worked out on paper a ship which theoretically had stability superior to pylon-type designs and high performance. Every detail in the Amazon was carefully planned, and any feature which could not be listed as 'functional' was discarded.

The efficient high aspect ratio (9.24) wing has a sheeted leading edge, full-depth box spar, and cap strips for warp-resistance and strength. The full-sheeted tail is easily constructed, warp proof, and twin rudders out of the prop wash make for less 'touchiness' under power and high efficiency resulting from an effective increase in stabilizer aspect ratio.

The triangular fuselage construction allows maximum rigidity for weight of materials. A single belly wheel cuts out conventional landing gear weight and drag, ROG's easily, and will never cause the ship to nose over. The engine was inverted to allow a high thrust line near the center of drag to lessen nosing-up moment and the inefficient com-pensatory effects which go with it. The deep slab sides enable control of CLA placement for stability, and far better visibility. (The longer the ship is seen, the longer that stop watch runs!)

First flights confirmed my choice of high CG-low CLA approach to spiral stability. No Amazon made to date has shown less than a 1 to 10 power to glide ratio in dead air, and the '1000' has been hitting a surprising 1 to 18 fairly consistently.

Stan Hill on construction: Lay out and assemble the two fuselage sides one on top of the other. When dry remove the two sides from the plan as one and block-sand to identical outline before separating. Bevel the lower longerons, glue and clamp with clothespins. While this is drying, install cross members at the top and the forward part of the bottom of the fuselage. Recheck the bottom for proper alignment before dry, as it cannot be warped into shape later.

Install engine on firewall and give the nuts several heavy coats of fuel-proof glue. This same glue should be used for the entire forward quarter of the fuselage.

Install firewall, fuel tank, wheel well, and dethermalizer timer mounting plates. Glue on wing mounts and side planking and when these are dry, plank the top, checking alignment carefully as this sheet locks the fuselage into a rigid structure when dry. Install stabilizer platform. After sanding smooth (#1/2 closed coat garnet paper followed by #4/0), dope on the cloth (linen) firewall reinforcement. The wing is the only part of the Amazon that departs from usual struc-tural practice and must be done in the following sequence:

1. Pre-glue joining surfaces of the spar and when dry assemble the com-plete spar on the spar plan. When dry remove from the plan, glue and clamp reinforcement plates, and dry for twenty-four hours. Bevel as shown on plan.

2. Block up TE, spar and LE from plan as indicated and glue in rib halves on either side of spar. (Ribs should previously be stacked and sanded to identical outline.) Before removing from the plan glue on the upper part of the TE. It is best to assemble the inboard panels first and tips last

3. Complete the center section and bevel the entire LE preparatory to sheeting. Sheet the section from spar to leading edge doing the bottom first, one panel at a time, being sure to glue it to all ribs as this forms a rigid cellular structure. Note: Upper surface sheeting should be medium on inboard panels and medium soft on outboard and lower inboard panels. Lower outboard panels should be soft.

4. Weight wing down on a flat board and glue on upper surface planking, allowing to remain under weights until dry. When sheeting the upper surface of the tips block up the end of the trailing edge 1/4 inch for washout..." 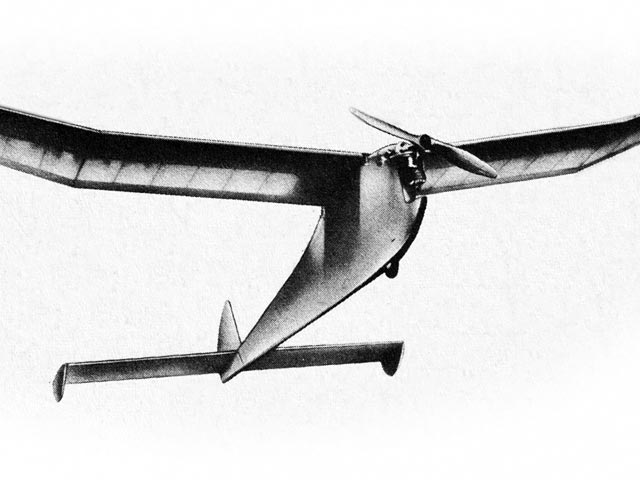