Quote: "I took up ridge soaring, first with a Thermic 72 then with a modified Super Sinbad using a 6 foot wing. In Orange County, California, the topography and pre-vailing ocean breeze combine to make conditions ideal for the sport. On the average we can fly most any day from 10 to 6 pm and in the summer until 8 pm. My first few years of ridge soaring were a bit lonely and it seemed I worked harder at getting up a companion's glider than I did in keeping my own flyable. However, in time our numbers grew and we formed today's Harbor Slope Soaring Society.

Eventually the thrill of just another ship in the air with mine wore off and to keep things lively I started pursuing any glider that would stay up with me. Since most of us were also War I buffs, in our chasing, we fancied ourselves to be in War I combat. I suggested we add to the illusion by building and gliding planes of that vintage. Amidst considerable skepticism, a Fokker E 111 was built and glided with great success. The Morane we have here was built to fly combat and the two ships have been flown together to create a realistic and fascinating spectacle for fliers and audience alike. I chose the Morane because it was a contemporary Allied counterpart of my friend's Fokker E III, a monoplane and with its big spinner was one of the most streamlined and beautiful planes of its day.

A little historical research tells us that the Morane Saulnier model N or Bullet was designed by Roland Saulnier (who died March 4, 1964 at 83) as a direct development of his earlier fighters and still earlier racing monoplanes of the pre-1914 period. It used wing warping, was of typical wood and fabric construction and with its 110 hp Le Rhone engine could do 102.4 mph. In tests, it outperformed against a captured Fokker E III. On April 1, 1915 Raymond Garros flying an N equipped with an unsynchronized forward firing Hotchkiss gun and steel deflectors on the prop blades, surprised and shot down an unsuspecting Aviatik. In 18 days he destroyed 5 German planes and made himself and this airplane famous by becoming the scourge of the German Air Force. On April 19th after a forced landing in German territory his airplane and its secret were cap-tured intact. It was this capture which led to Fokker's design of a truly synchronized gun.

The basic scale of my plans is 1-1/2in to the foot. However from this, to get better gliding and control characteristics, I had to deviate with an increased span, dihedral, tail area and nose moment. Hence the term semi-scale. Since completion, further research has revealed the small 3-views I worked from were a cross of the 'N' and the slightly later 'AC' but to keep the scale buffs quiet, I would like to say I now have four different 3-view drawings of the N and they all differ materially. However, my ship is easier to build using all circular cross sections and it does capture the jaunty look and spirit of the real thing on the ground and in the air.

The model is 'practicalized' with knock-off wing and tail sections, planked forward body and wing leading edges and is otherwise ruggedly built. It is, a strong and forgiving model that will allow you a few pilot errors without demolishing the plane. The ship has taken some terrible crashes and is still intact and it is quite light enough to glide and does so quite well. I highly recommend all the 'slot and key' called for on the plans because if carefully done, it makes aligning and assembling a joy and gives a strong structure..."

Quote: "Here is a rather unique Morane Saulnier, it's a glider. Grover Moore's slope, combat, RC glider is from Model Airplane News issue 07-65. The plan is drawn by Lee Renaud, the extraordinary sailplane designer in his own right. I found it odd he was only the draftsman on this plan. Maybe he was earning money to start his Airtronics model company about this same time period. A beautiful plan none the less, brought back to life from a heavily discolored magazine scan." 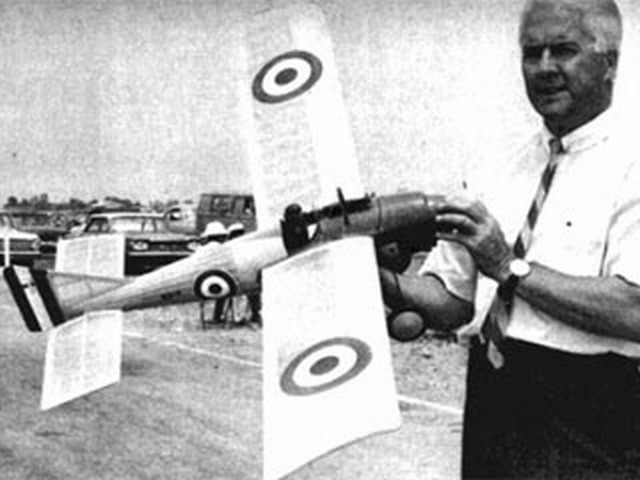