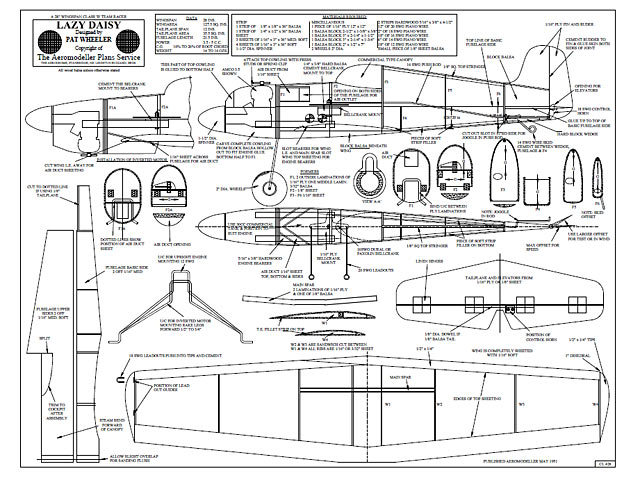 Quote: "The last plan from the May 1951 Aeromodeller is Lazy Daisy. This is a Class B Team Racer designed by South African Pat Wheeler. That the design had been developed over a few models is highlighted by the Mk III addendum to the title. It really looks like a versatile build with engines between 3.5 and 5 cc, either upright or inverted. For me, it closely follows the original concepts of team racing in that it has a cabin in which a pilot could sit and looks like a plane."

Quote: "LATE last year, Pat Wheeler built Lazy Daisy Mk.I and based the layout on an earlier sports model, the Fury Screwball (oz4631). This first racer had a low aspect ratio wing with a 7 in root chord, and an Amco 8.6 diesel mounted inverted for better appearance. Baulky starting influenced a change in design, so Mk.II appeared with an upright motor. Starting then proved easy, and the handling characteristics aroused fellow Cape Town clubsters to compare it with the proverbial dream.

With the progress of experience, and showing how far-away modellers keep abreast of our own British findings, Pat Wheeler decided to make a Mark III as presented here, and incorporated a higher aspect ratio wing based on facts and figures in the Aeromodeller - It's designed for You - feature. He also made an earnest attempt to clip the weight down.

Thus lightened to an all-up weight of 14 ounces with the Amco 3.5, Lazy Daisy was soon lapping at over 70 mph using a locally produced 9 x 8 prop. At the time of writing, Pat was in the throes of fitting a Dooling 29 to Mk.III with hopes of raising the flying speed over the 100 mph hurdle. And judging by its slim lines and light but simple structure, installation of any 5 c.c. first-class motor, either upright or inverted, should push Lazy Daisy into the nineties without effort.

We almost forgot! This is but an eight evening job, no planking and no tissue covering - and of course, it complies with all the '51 SMAE Team Racer regulations. What more could a racer want?

Building. Wings: Cut lower surface from butted 3 in sheets, dope and steam at cranking position for 1 in dihedral at tips. Pin to a board, with c/s flat and tips propped up. Add front halves of R1 and R2, R3, R4. Make up and fit laminated mainspar. Unpin and lay one side flat, then attach steamed upper surface, trailing edge filler strip and tip piece. Repeat for other half, joining the upper surfaces with a good butt joint and cement skin, and not forgetting the tip guides..." 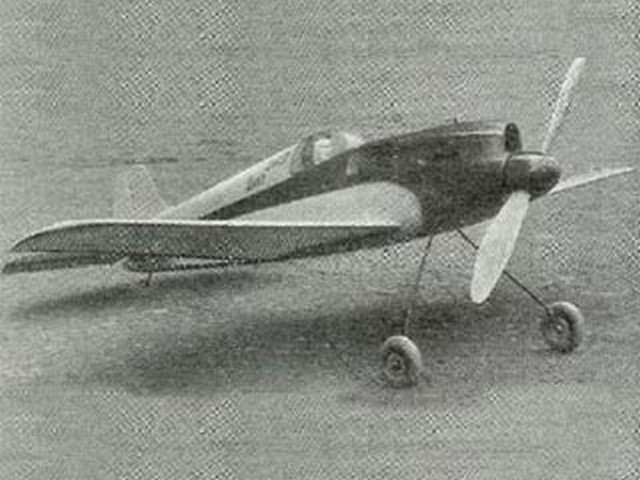