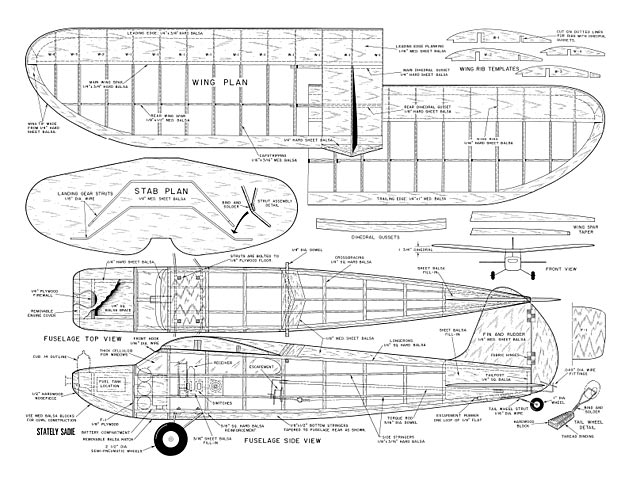 Quote: "Take a quick look at this beauty - don't you agree she looks like a full-size airplane? Exactly the model you want to take out Sunday flying. Scale-like plane for radio controlling. Stately Sadie, by Frank Ehling.

As the hobby of radio control model plane flying branched out into multi-control and rudder-only contest groups, major emphasis has been on designs which offered good aerobatic possibilities. Aside from the absolute scale offerings not many realistic-looking craft have been available to the low-and-slow 'Sunday-flyer.'

Sensing this from reader inquiries concerning scale-like but easily constructed R/C planes, Young Men commissioned Frank Ehling, noted air-model designer, to come up with a model simple to duplicate, yet one that would leave no doubts that it was a miniature 'airplane.'

FE's ultimate design is unveiled here and launched as 'Stately Sadie'. Among her other features Sadie has a wing span of 50 inches and an overall length of 38 inches. To enhance her full-scale lines, the builder decked her out in big plane colors and trim. Photographs of the model viewed by various aviation folks have led them to believe Stately Sadie was a real honest-to-goodness airplane.

To keep construction as simple as possible and make sure the wing assumes the proper angle, the top longeron is straight from cabin to rudder. Sheet balsa stringers on top and bottom of the fuselage heighten the scale-like appearance. The model was tested with a number of powerplants; the Cub .14 proved ideal. Notice that there is a generous amount of space provided for the radio com-partment and for the fuel tank. By careful application of balsa block and sheet the designer has produced a remarkably sturdy craft.

Photos at the right give evidence of the generous working space that has been built into the model."

Update 03/06/2014: Replaced this plan with a clearer copy, thanks to bulldogdrummond. 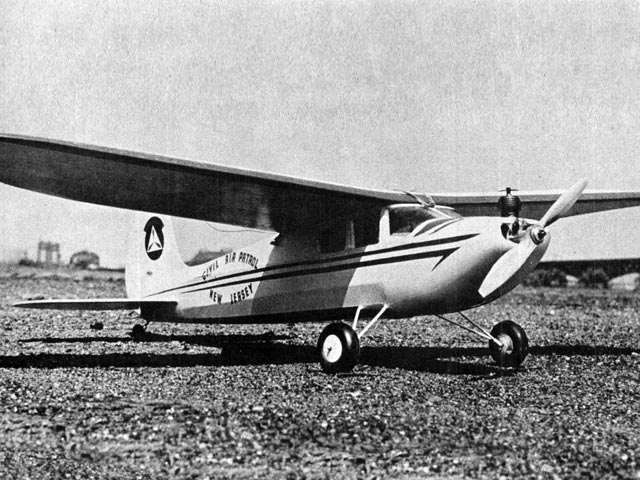