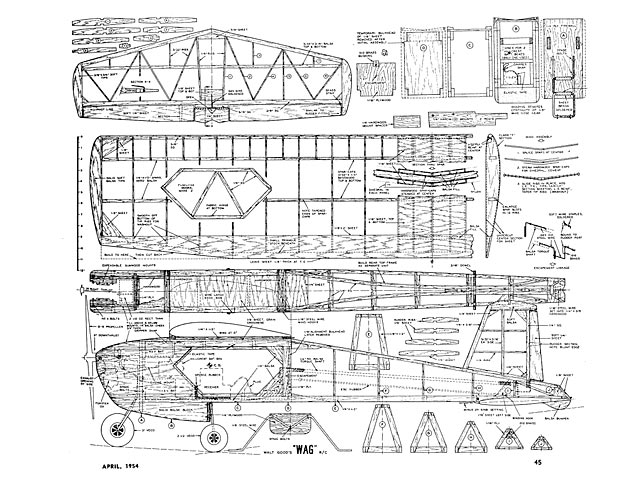 Wag was designed to fill the need of a sturdy stunt R/C plane and also serve as a sport plane for everyday flying. The ship has a 5-foot span, a wing area of a little over 4.5 sq feet and runs a wing loading of a pound per square foot. A Clark Y airfoil was used for speedier flight and with washout in the wing tips it prevents tip stalling. The body was 'ruggedized,' particularly in the nose section, by using practically a double cabin structure as well as 3/4 in side walls and a solid balsa chin block.

The side area of the body was proportioned with the fin to give both good spiral stability and to allow the propwash effect on the fin to straighten out the power flight. Even at that some right thrust is needed.

The step effect at the rear wheels was intentional in an attempt to introduce some drag to settle the glide and minimize speed buildup during turns, following Dick Schumacher's 'Brute Force' concept. Don't try this ship for duration - it just doesn't float!

Provisions have been made for elevator and rudder control with completly enclosed linkages. Only rudder has been used thus far. (Performance reports and construction data in the full size plans.)"

When you think of R/C pioneering, you automatically think of Walt Good. And with good reason, for he has been involved in radio flying since 1935, when he and his brother, Bill, first started their experiments in this fascinating field.

Walt, or as we should perhaps call him formally Dr Walter A Good, had been flying models for some time; his first creation was made of kite sticks covered with dress silk. It was not a huge success, but he soon got into model building in earnest and started attending meets. His first Nats success was an 11th place in Indoor Cabin, and despite many firsts garnered in later years, this indoor win stands out as one of the most exciting. When Walt became interested in radio control he was strictly a model plane builder, but he had the great advantage of his brother's radio knowledge. Bill had been an active ham operator since 1932, and the pair were a natural in their joint R/C endeavors. They exhibited their first R/C plane at a science exhibit at Kalamazoo College in 1936. The next year they entered the first R/C event ever to be held at the Nationals - and came in fourth. From 1938 to 1940 they were top men in the field, winning the Nats event each year!

The plane they flew in these events was the Big Guff (oz7456), an enlarged version of the Guff (oz2319) that Walt had designed and flown very successfully in free flight gas con-tests. A real giant, when judged by the average R/C ship of today, the plane carried two-channel radio equipment for rudder and elevator control (though the latter was never used in their contest wins), and had enough cabin room to put in not only both hands, but most of your arms as well! While other R/C flyers were using multi-tube receivers, and later the gas tube developed especially for radio control (forerunner of our present-day RK61 and XFG-1 types), the Good Brothers perfected and stuck with a single-hard tube receiver. Their circuit was very much like that used in such sets as the 'Simple-Single' today.

Although they were unable to get to the first postwar Nats at Wichita, the Goods continued their winning string in 1947 at Minneapolis. The old faithful Guff was again put through its paces; Walt admits there was not much of the original left by this time. This was the last appear-ance of the veteran ship at a Na-tionals contest, and it also marked the last Nats that Brother Bill was able to attend. Guff may go into the Smithsonian Institution - but Bill expects to be around for a long time yet.

Dr. Good next showed up at the 1949 Nats in Olathe, and he had a brand-new design with him. This one, the Rudder Bug (oz7009), had been introduced early that same year and had created tremendous interest, so much so that when the Nats rolled around, 11 out of 32 R/C entrants were flying the new design! Walt continues to compete in local con-tests, with uniform success. At the 1952 National Capitol model meet. he made an official FAI flight for R/C Duration, and set an official FAI world record of 40 minutes, 27 seconds in the air. The motor run was 26-1/2 minutes, and the glow-plugged Forster .29 was fed with about 1/2 lb. of fuel, from two large auxiliary tanks strapped on.

After a PhD degree at the University of Iowa, Walter immediately began intricate research at Carnegie Institute in Washington. Later he joined the staff of the Johns Hopkins Applied Physics Laboratories. Dr Good is one of the prime examples of an active model builder - and radio controller - who has engaged in valuable scientific work in later life; he was instrumental in the develop-ment of the proximity fuse during the war, and also had a hand in the design of complex Navy electronic fire control apparatus.

Active for a long time in AMA affairs, Walt looks back on a couple of years as Chairman of the Contest Board as a really hectic period. He led the successful campaign to in-duce the FCC to set up a special spot for R/C flying, the 27.255 crystal-controlled examination-free frequency. Probably even the Doc himself has lost track of the number of letters written, conferences held, R/C demonstrations given to FCC members - all of which resulted in the 27.255 spot." 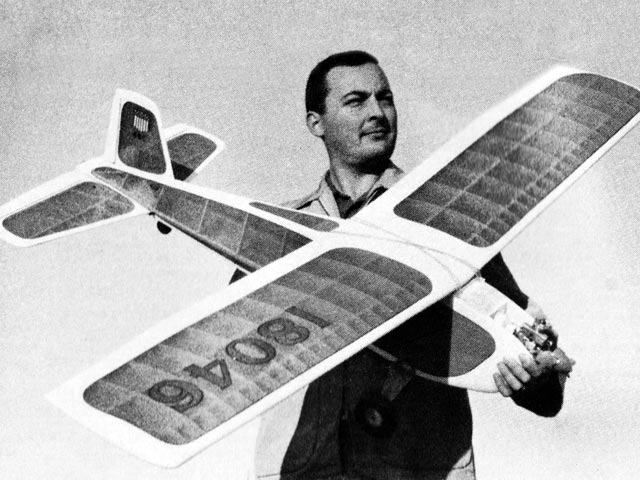