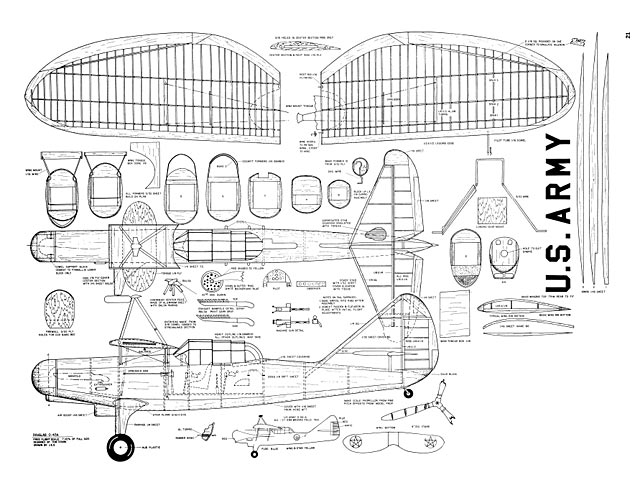 The Douglas O-43A is an Army Air Corps observation airplane developed and used in the mid-1930's. It was a rather large (46-foot span) and powerful (675 hp) airplane for its type and its performance was quite good, even when compared to the fighter planes of the early thirties. Its high speed was 191 mph and its rate of climb was 1800 FPM.

The O-43A is the middle of a line of Douglas observation airplanes that was actually the constant evolution a single type rather than several separate designs. Initially, there was the O-31 and its subtypes which introduced the basic shape of the flying surfaces. The wing of the O-31 was attached to the top of the fuselage and was slightly 'gulled.' The O-43A followed and introduced the parasol wing, a more refined canopy and elimination of a propellor spinner. The O-46 was the last of the line. It had a radial engine, strut braced wings rather than wire braced and a different aft fuselage contour.

The O-43A was chosen as the best compromise for model purposes of the O-31, O-43, O-46 series. Finding suitable information about the O-43A on which to base the model was nearly as big a project as building the model itself. Sources of information came from the Douglas Aircraft Company, the Air Force Museum, the Smithsonian Institution, old issues of Model Airplane News, and conversations with a pilot and mechanics who actually flew and maintain-ed O-43As.

The model O-43A was designed and built primarily for free flight flying scale competition. This means that it must have plenty of scale detail for judging, fly realistically, and be easy to operate in the confusion and pressure of competi-tion. These requirements tend to be mutually contradictory, hence compromises were required. Some of the compromises that were made are:

1. Engine is only partially enclosed. Although this has cost scale points, the very reliable performance of the engine has more than added these points back during flying.
2. Landing gear fairing at the fuselage is modified. This also cost scale points but the landing gear has never been damaged to the point that the airplane could not be flown.
3. Dihedral is scale thus gaining scale points. An earlier wing was used that had more dihedral but there is no noticeable difference in performance with the present scale dihedral wing.

These compromises are largely a result of trial and error. They appear to have paid off, however, since the O-43A has a good competition record to date, a first and second out of three contests in which it was flown. The scale to which the model is built is somewhat unusual; ie 7-1/2 % of full size. This was chosen because the original plans were drawn from factory drawings that were 5% of full scale. It was an easy matter to scale them up 1-1/2 times to get a model of convenient size.

Good scale drawings to submit for judging are available from the Smith-sonian Institution in Washington, DC for $1.50. These are 3/4in to the ft blueprints. These same drawings appeared in Model Airplane News in July 1951. As photographs of real O-43As are rare, you can use the one in this article which was supplied by the Air Force Museum. If you choose to obtain the drawings from the Smith-sonian, you will find that the model is 1.2 times the size of the drawings.

If you plan to build the O-43A, you undoubtedly have some ideas about modifications. Here are some suggestions. If you aren't going to enter competition but are interested mostly in sport flying, the wing can be simplified.

Make the ribs out of 3/32 sheet and space at about 3 times the spacing shown on the plans. A flat-bottomed airfoil is satisfactory (except for scale points).

There is every reason to believe that the O-43A could be suitable for a light weight RC installation. A Fox .07 RC engine should be well suited for this purpose. Hatches will have to be built, of course, and cockpit detail will have to suffer to allow for equipment. There is nothing particularly difficult about the construction of the O-43A, however, certain building sequences should be followed.

Let's begin with the wing. Cut the trailing edge and tip parts from 1/4 in medium balsa. These should be pinned flat to the plan and glued as should the 1/2 in square leading edge. Now install 1/16 x 1/8 balsa strips to form the 'core' of the wing ribs. Wait overnight for this stage of assembly to dry thoroughly. While the wing assembly is drying, it is a good time to cut the center section parts and the plywood root ribs..." 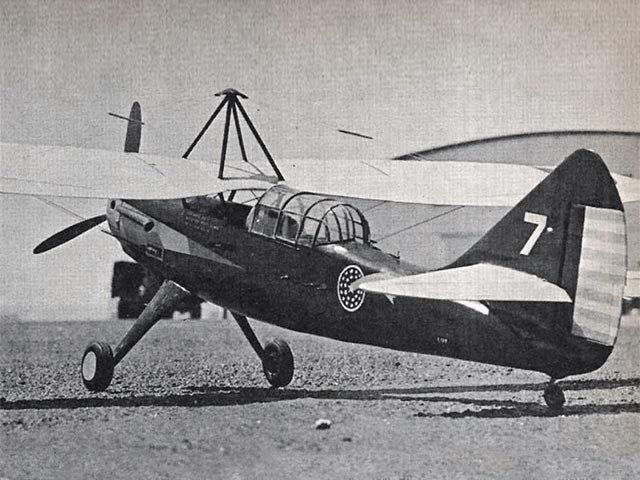