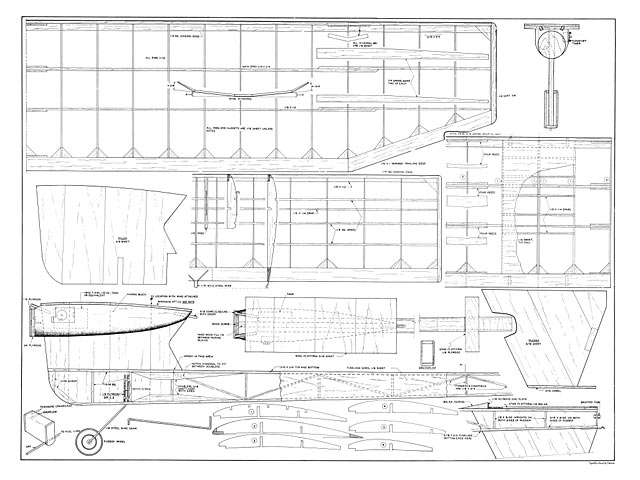 Quote: "In design development for more than four years, our famous free flight machine is the culmination of all this effort. That it is a winner is attested by its holding National class C record. Witch Doctor 800, by Jim Clem.

Perhaps the most difficult type of article to write is one in which a designer attempts to set forth objectively the merits of his own design. If the writer is too conservative in his descrip-tion, the article will suffer from the lack of 'color' and fail to impress his readers. On the other hand, if he exaggerates and makes unwarranted claims, he is subject to the wrath of the trusting modeler who builds the design. Humbled by this last thought, this writer will make every effort (within reason) to stick to the facts regarding the virtues of the Witch Doctor 800.

Most free-flighters are familiar with the 1/2A Witch Doctor X. Those who know the 'X' will recognize a difference of appearance between the 'X' and the '800.' The latter is not a scaled-up version of the 1/2A size. However, both ships did evolve from one basic design. The more significant changes were made in the smaller size to accomplish a specific goal. Hence, the X was added to denote a design difference. The straight Witch Doctor, or what may be termed as the original Witch Doctor, is the subject of this article.

While it may seem presumptuous to go into some detail regarding the development of the Witch Doctor, the background is important because a builder is not expected to accept a 'pig in a poke.' The more information made available, the better one can judge for himself the merits of building the '800.'

Witch Doctors came into being in 1963 when two B-C ships were built. One featured an undercambered wing while the other was equipped with a flat bottomed section. Both wings had a relatively high aspect ratio. The two planes were difficult to compare during the early stages of development. Only after the basic flight problems common to both planes were solved was it possible to draw a conclusion as to which wing design was the more efficient. After several months of contest flying, the writer decided the undercambered wing had a slight edge in the glide department. The wing penetration factor seemed to make very little difference.

Feedback from these builders enabled still more refinements to be made. Most changes at this point were structural in nature..." 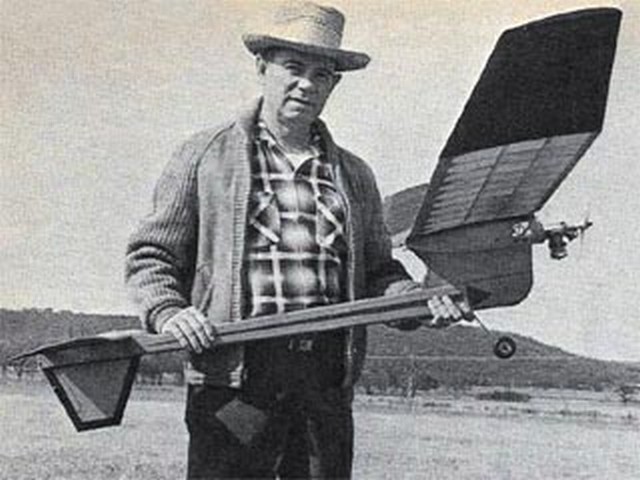