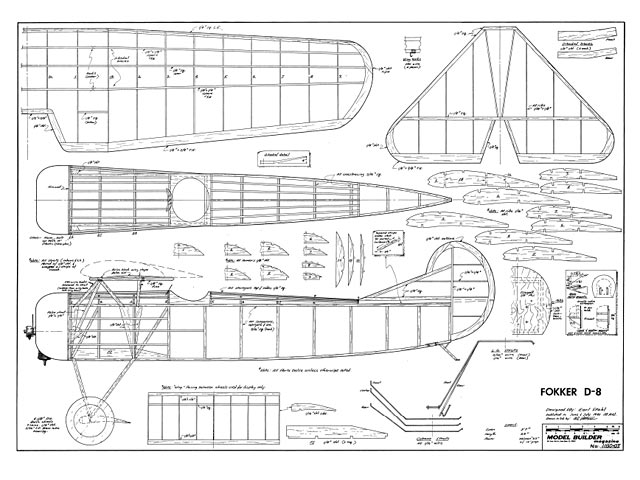 Quote: "SAM Speaks editor. Jim Adams, with his D-8 and the 1st place trophy won at the 1976 SAM Champs at Wright-Patterson AFB in Ohio. Jim's winning time Was 4 min, 6 sec, quite an achievement considering the confined flying space available.

Earl Stahl must have been one heckuva busy man when preparing material for the June and July 1941 issues of MAN. In addition to two of his fine rubber scale ships (a P-39 Airacobra in June and Stinson 0-49 in July), each issue carried one of a two-part article on his gas-powered Fokker D-8, an interesting departure from his numerous rubber models. It was a 57-incher of strictly conventional construction, powered by an Ohisson .23 with a 12-inch prop to keep the revs down and the flight realism up. Not a contest job by any means, Earl's intent was to instead produce a reliable, stable flier that looked and flew like a real airplane, and he has come pleasantly close to meeting that goal.

All of Earl Stahl's designs have the reputation of being better-than-average fliers, and the D-8 is no exception. Several copies have been built and flown out here on the West Coast, most notable being the one SCAMPS member Jim Adams built around ten years ago. Jim's Fokker performs as well today as ever, although it's now on its second wing (clobbered a telephone pole at Taft) and is sorely in need of a recovering job. An ED Snipe .09 diesel provides the power and just the right amount, too, as the model makes a very realistic ground run and takeoff before assuming a fairly tight left turn and leisurely going for altitude, a week's worth of DT fuse trailing behind. The glide is a very wide right-hand circle. Speaking of DT's, Jim rigged his model so that the entire empennage assembly pivots at the leading edge of the stab. That's a lot of stab to be popping up, but is made easy by running a rubber band from the top of the rudder to a hook halfway between the cockpit and the stab LE. For those who want to take a chance at building-in the flight trim adjustments, Jim's D-8 has 1° of right thrust, a tad of right rudder, and 3/16-1/4 inch of wash-in in the left wing panel. Balance point is at the middle wing spar.

Possibly the biggest hurdle for a D-8 builder to overcome will be locating a suitable cowl. Stahl used a spun alumi-num cowl stocked by all the hobby shops at the time, but of course this is no longer the case. The most obvious alternate is an aluminum pot of the correct size (Jim Adams made his this way), or possibly the bottom half of a plastic jug might do the trick." 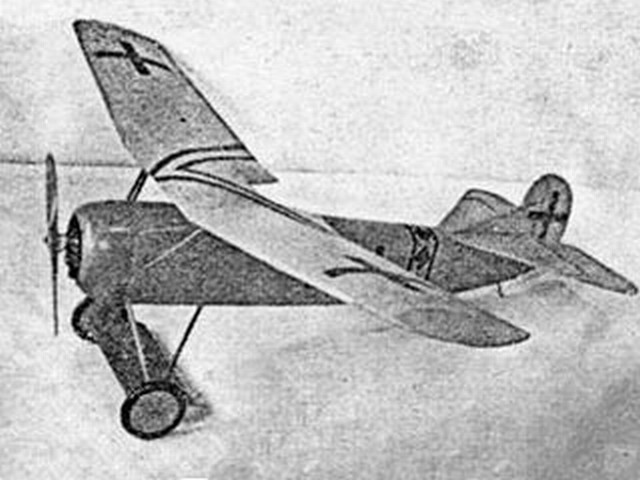