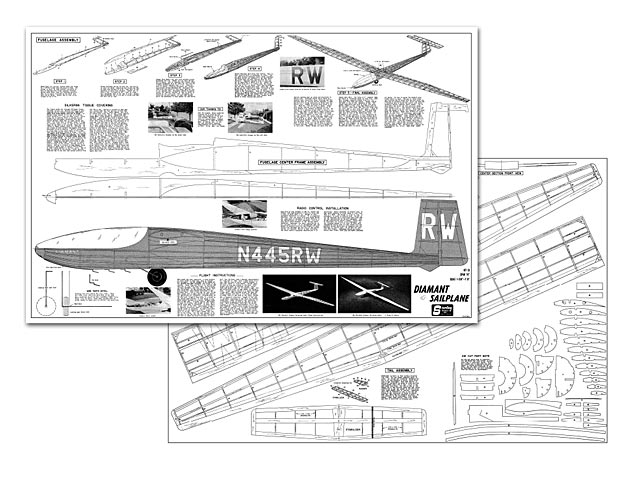 Quote: "Saran Wrap (or similar) placed under the frame will Prevent frame from sticking to Plan. Fuselage is built on flat surface, directly on Plan of Fuselage-Fin frame assembly drawing. Spread Saran Wrap, then pin Fuselage parts #1 thru #4 in place, followed by fin parts #16 thru #19 as shown. Cement #3A at rear of fuselage on top of #3.

Cement Wing Saddle #23 into wide notches across Bulkheads #8 & #9. Cement die-cut Nose stringers in place. #24 is cemented into center notch between bulkheads 45 & #9; #25's go into the adjoining notches against rear of #5. Complete step by adding 1/16 x 3/32 Stringers into remaining notches around Bbulkhead #9. Stringers extend from this point to rear where they are cut to fit against #19. Stringers should be spaced evenly and tapered together at rear as shown on sketch on full size side view. Stringers are installed in this manner, so that they extend above the bulkheads in same manner as side Keels.

Remove fuselage half from flat surface, then cement opposite half of Bulkheads in place. (Do not make another fuselage center frame assembly; Bulkhead halves are cemented to the same fuselage frame that you have removed from the flat surface). Complete opposite side in same manner as described in Steps #2 & #3. Cement top fin half-ribs #31's to either side, and flush with top of 417, as shown. Note that protruding key for stab extends past Ribs.

Ribs #32, #33 & #34 are now cemented in place, followed by #35, which slips in place under #17, as shown. Allow frame to dry thoroughly. Sand all stringers slightly to a smooth surface, trimming and sanding if necessary flush with rudder post #19 as shown. Be sure to sand smooth the front cockpit area, which is later covered and painted.

Install Landing Gear as shown and described in detail note. Although sketch above shows assembled model uncovered; Wing, Fuselage and Tail Surfaces must be covered before assembly is made unless R/C is being installed, in which case see detail note. Cement 3/4 x 7/8 x 1 nose block in place. When dry, trim and sand to shape.

Completed center section is now cemented to top of wing sSaddles #23, between bulkheads #8 & #9. Be certain it is pressed firmly down in place to insure proper angle of incidence (angle viewed from side). When dry, cement #26 in place followed by 1/16 x 3/32 sStringers on each side. In order to provide surface for tissue covering, cement 1/16 sq. Stringers to top of wing between (and flush with) #8 & #9 as shown... " 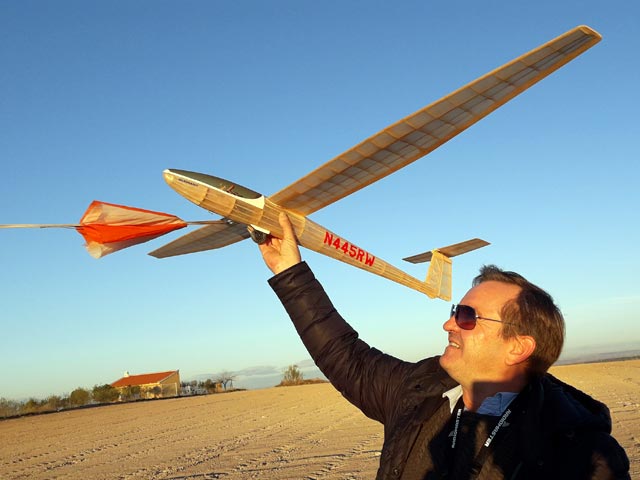 I purchased and built a Sterling Diamant in the mid-70s after seeing a picture of the kit in, probably, Model Airplane News. I remember riding my bike to the hobby shop in a neighboring town and purchasing the kit with the money that I earned showing chickens at the county fair. The Diamant kit was quite complicated for a 12- or 13-year-old kid, but I persevered and eventually had the model built and ready for testing. I remember that I was concerned about the wing center section -- the split dowels didn’t seem like a good idea even to my teen-age mind, but I couldn’t figure out any other way of building the center section. I got to fly the Diamant twice: once to test the balance (it was perfect) and once on a towline. About halfway up the tow my fears about the center section were realized and one wing folded up and the whole model came crashing to the ground. I was so disgusted by the whole thing that I picked the model up and dropped it in our burn barrel on my way back to the house. So if anyone is interested in building this model, there is a fabulous source of information available at the RC Soaring Digest Web site, http://www.b2streamlines.com/FFADiamant/index.html And, of course, I suggest that you do something to make the wing center section stronger.
ChuckBigham - 15/08/2014
Hello friends, again a pleasure to send more photos to share with this great family. This time it is again a tribute to my brother Santiago who left us soon, but he left many semi-finished models or in the absence of flying. This is the case of the Diamant [main pic, 005-009], a beautiful model that requires skills and knowledge not only to build it, but also to fly it, and this is the case of this Diamant, finished in the style of the Free Flight models but already found in the workshop in Santiago a Lack of receiver and battery, my son, (his nephew) put him a 2.4 Ghz Spectrum receiver. and we looked for Ni Mh AAA batteries, a good pilot and a very elastic and not very powerful bungee were the key to some beautiful maiden flights. After doing a flight session, we have decided to save the model, and fly it in his memory on very special occasions. Shout out to Steve and Mary.
AntonioRG - 14/12/2021
Add a comment