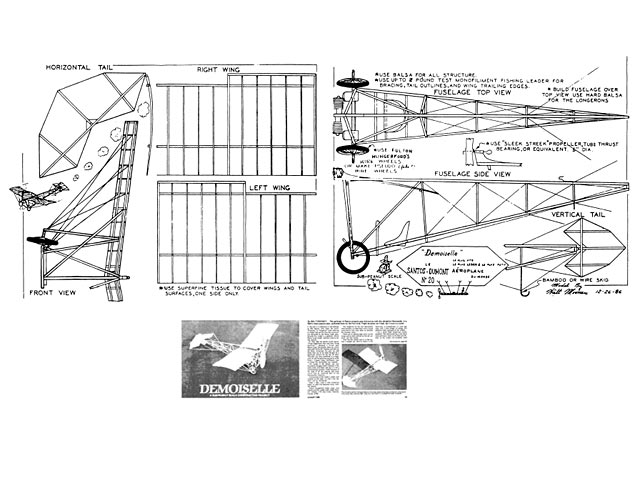 Quote: "A sub-peanut scale construction project. The perfesser of peanut projects goes diminutive with this delightful Demoiselle. It is Walt's most popular plan, published here for the first time. Flight duration isn't high, but it sure is a cutie!

The title is in deference to the feelings of Bill Warner who hates the terms, 'Pistachio' or 'Grapenut' when referring to models that are less than the maximum size allowable by the Peanut Scale rules. Actually this model is a perfectly LEGAL Peanut scale model, nowhere close to being oversize.

In 1966, after the advent of the movie 'Those Magnificent Men and Their Flying Machines' I designed a 12-inch span Peanut Scale Demoiselle, plans for which were sold first by Bill Hannan and then by the Pecks. Amazingly, this plan has sold better than any of my other designs by a significant amount for the last 20 years. That plan was never published in a magazine, so with the growing popularity of the Pistac... Grapen... oops, sub-Peanut class of model, this Demoiselle was inspired.

The model in the photos was constructed by Douglas Martin Mooney. It flys quite nicely and looks cute but it is not a world-beating duration model because of the drag of all the bracing and wires which are an essential part of the Demoiselle's charisma.

Construction of the model is pretty well covered on the plan, so only a few key items will be mentioned: Keep it light, cover it with condenser paper or super fine Japanese tissue, nothing heavier. Fulton Hungerford makes super wire wheels and this model really needs them: FH Wheels, 1770 Lilac Circle, Titusville, Florida 32780.

The longerons on the real Demoiselle were bamboo, so make them with a round cross-section and color them to simulate the bamboo joints. There are no trailing edge sticks on the wings and no stick outlines on the tail surfaces; use fine thread.

Note that the wheels lean in at the top. Use a straight pin, bent as shown in the front-view, (a contradiction, if I ever saw one), and a short length of tubing, (CA adhesive tube) outboard of the wheels.

Use a small Sleek Streak-type plastic propeller. The Demoiselle has a very short nose and heavy items on the front are OK. Even so the model will probably need nose weight ballast. The model in the photos flies with the CG one inch aft of the wing leading edge, and getting it there took ballast.

Do not shrink the tissue, it will warp the model and besides, covering wrinkles make for a near scale-like appearance.

The wire bracing is only for looks on this model. It is more than strong enough without the bracing. Your model will fly lots longer without it.

The thrust bearing is a short length of 1/16 diameter aluminum tubing cemented on top of a 1/16 sheet balsa support. Cement the dummy cylinders on each side of the support. Be careful not to use too long a rubber motor because if it sags below the top longeron it can get wrapped in the fuselage brace wires and it's tough to get out. A motor longer than the length between the prop hook and the rear hook is dangerous unless it is pre-tensioned some way.

One way is to use a 'White Rope' tensioner. It is done in the following manner: A length of rubber that will make a loop longer than the motor base length is given about a hundred winds before it is tied to make a loop. This pre-twisted loop will wind around itself and shorten the dis-tance between its ends, acting like a shorter loop but still being capable of be-ing wound up like the loop it really is. Twist it before tying in the same direction that it is goind to be wound for flight. Experiment to find out exactly how many pre-twists are optimum for any given loop. Have fun with this small one." 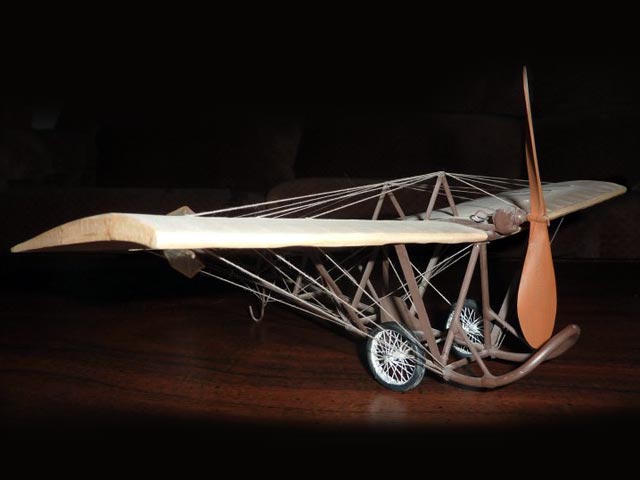 Here’s my version of Walt Mooney’s 1986 peanut scale Santos Dumont Demoiselle [main pic, 003-005]. It is currently quite aged, having been constructed years ago shortly after the plans appeared in Model Builder Magazine. Fuselage longerons are indeed made of bamboo skewers. Wire wheels are handmade. Forward longeron skid is aluminum tubing. Thanks, Outerzone!
Neal Green - 09/12/2020
Add a comment