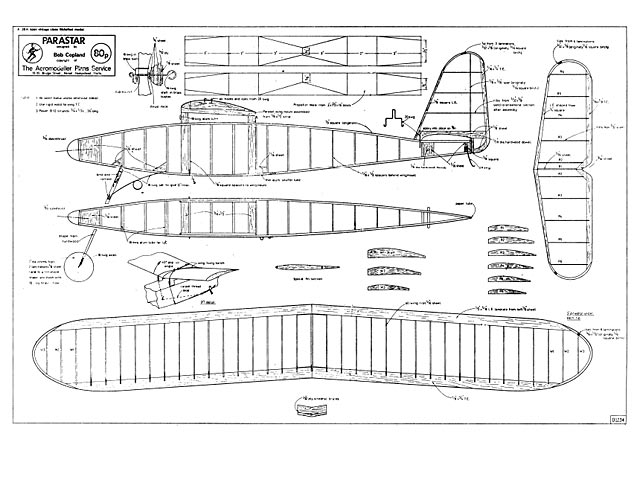 BEING A BIT of an oldie myself, I suspect that my interest in the model machines of yesteryear is in part due to unabashed nostalgia for those far-off but very happy days. I am taken back to a time when model flying was basically very simple but had an enormous potential which, for good or bad, has since been realised.

Model flying back in 1938 was much more of a picnic and family affair than it is today. Generally, model performance was poor by present day standards, with many model flyers still striving.for that magic minute of duration, and a thermal flight something to go into the club record book. This meant that model enthusiasts did most of their flying within the flying field and not outside it, which made for a cosy state of affairs; and with no engine noise or danger, the model plane existed happily side by side with the kite and cricket ball.

Except for the relatively small number of large petrol engined-powered planes, models were on the whole, smaller than they are today, mainly due to the need for portability. Few model flyers in those days had motor cycles, let alone cars, so models had to be compact enough to be carried on a bus or train or even a bicycle. When, in the immediate pre-war years, hundreds of modellers converged upon Fairey's Aerodrome (now Heathrow!) for the Wakefield Trials, they came mostly by public transport, and it says much for their enthusiasm that they undertook their long journeys nursing their model boxes through the hazards of railway junction and bus station.

The great charm of the old model, which we now call vintage, was its distinctive appearance. Free-flight models today are very stratified in design; so refined, in fact that it is difficult to see how they could develop further, whilst the multi-radio model has long since reached the bounds of what can be expected from a model plane. Ultimates, because they are ultimates, tend to look very much alike, with none of those differentiating characteristics by which the old model designs were easily recognisable t'other from which. Models which are built to fulfil a function can be varied and interesting on the way towards that fulfilment, but much of a muchness once the limit has been reached.

The real fun of vintage flying, though, comes in searching through the old journals and plans for a model which, to your eyes, 'has something', be it a sense of character or a performance possibility. When vintage events began, several years back, they were held on a duration of flight basis. The entries were widely assorted, but it wasn't long before the experts had pinned down the winning type of model: the late vintage ultra lightweight. These came to so dominate the vintage events that much of the variety which gives colour to these contests was lost. One way out of this was to widen the competitive field by models flying to pre-selected flight times, but this form of competition is not everyone's cup of tea, and some sort of judging, with a 'year of vintage' bonus, might provide another answer.

Personally, my idea of a vintage model is a pre-war design. A view which seems to be shared by our friends in America, who have made a cult of re-producing those huge, pre-war gassies. By contrast, my ambitions are necessarily more limited, covering only the older rubber-driven models. Such models from, say, 1935 to 1939, had a quite modest per-formance by today's standards and relied for success on the occasional big thermal flight. Often such a flight, in the days before the dethermaliser, resulted in a lost model. Indeed, just prior to the war, when model performances began to improve with the use of larger propellers and heftier rubber motors, fly-aways became something of an acute problem. The only consolation was that, apart from. Wakefields, models were generally of small size and simple construction, being replaceable by a 'beaver' builder in a few evenings.

Rummaging through some old model books I came across a 1938 copy of the old Model Aeroplane Constructor, a monthly magazine. To my delight it contained a half-size plan of a model that typified the British contest approach in those far-off days. It was a design of Bob Copland's, the 'J O'Donnell' of the immediate pre-war and post-war years. He is known to vintage flyers for his series of streamlined 'GB' Wakefields, but he did produce a number of highly successful lightweight models, of which the model that caught my fancy, the Parastar, is one. Although this model at one time held the World Duration Record, it was not as well known as the slightly smaller, but extremely successful Northern Star. It is, however, similar in outline but has a parasol wing, then an innovation in model design, and a two spar, close-ribbed wing: a design feature which Bob Copland, together with his eminent con-temporaries, RN Bullock and E Chasteneuf, incorporated in a whole series of beautifully streamlined Wakefields.

Models, back in 1938, conformed much more to what an aeroplane should look like than they do in these functional times - although Radio has been influential in bringing 'realism' back to the model scene - and the shaped rear surfaces and undercarriages were common to most pre-war designs. Undercarriages (lovely archaic word!) not only served the ends of realism, they were then highly necessary to the ubiquitous rise off ground rule. They also gave protection to the one-piece, free-wheeling propellers. A word here about the Parastar propeller, though. Unfortunately the original plan does not include a prop block layout, although the diameter is given as 16 in and the block size as 2 in x 1-1/2 in. To cover the omission, I have included a typical layout of the period. The propeller incidentally is of interest, as the wide bladed propeller, of which this is one, had only become generally adopted in this country by 1937 after proving their worth in the balmier American air. Many modellers still found such 'paddle bladers' a bit of an extravagance in our cold, blustery weather, and it is significant that in the same issue of Model Aeroplane Constructor which included the Parastar there were two give-away plans of Wakefield models, both of which sported the old type, narrow-bladded propeller, and one was actually powered by four separate skeins of rubber connected to a series of frontal gears!

Coming to the building of the model this should present absolutely no difficulty for the experienced builder. Just one problem presented itself: the specifying of in. square birch for the wing, tail and fin tips. In spite of the cries we hear to 'bring back the birch' none could be found. I did manage to obtain some spruce of the same section but this was altogether too whippy, so I resorted to a quite permissible alternative of the time: bamboo. I needed this anyway for the undercarriage legs, and I came across some in a shop for garden wares: ten useful-sized sticks for a few pence..." 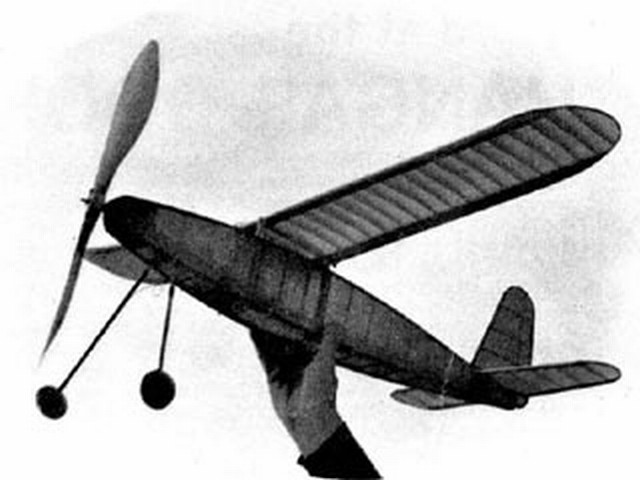