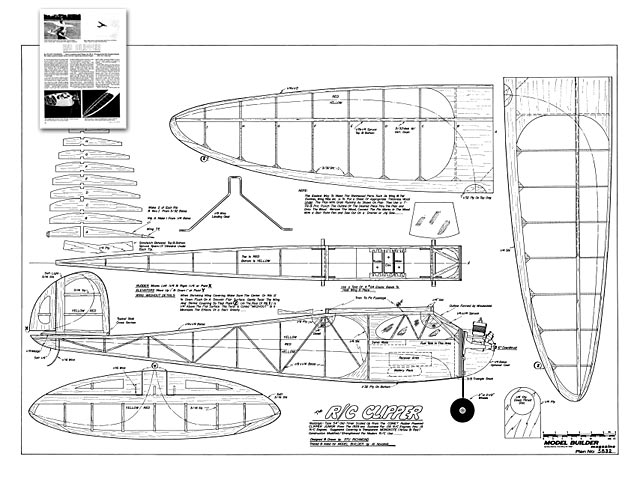 RC Clipper. Radio control version of the vintage Clipper design by Carl Goldberg. A 54in old-timer scaled up from the original 1939 Comet rubber powered Junior Clipper (oz614). For 3 channel radio control with .09 to .15 engine. MB 05-83.

Quote: "R/C Clipper, by Stu Richmond. Here's a medium-sized Clipper for .09 to .15 engines that fills the gap between the rubber powered Clipper Junior and the original gas powered Clipper - with Carl's blessing!

The most beautiful curves in the world are on a woman's body! I think the next most beautiful curves appeared in the graceful, elliptical wing planform of RJ Mitchell's Spitfire fighter, and a series of historical free flight models designed by Carl Goldberg. The Carl Goldberg designs started about 1937 with the Valkyrie (oz6156), included the Clipper (oz7380) in 1938, in 1939 the Junior Clipper (oz614) for rubber power, and shortly thereafter probably climaxed with the Zipper (oz387) and Sailplane (oz1058) around 1940.

As I was too young in 1939 to know about the curves on a woman's body. I was attracted to the Clipper Junior that was kitted by Comet Model Airplane and Supply Company, and sold for $1.00 complete with enough rubber to make it really fly, and fly it did! It was the first model I ever built that consistently turned in flights of over a minute. It was my favorite model for a long time.

During WWII's earliest days, I was lucky enough to get a Super Atom as my very first engine. Quickly, I built another Clipper Junior kit, bolted on the Super Atom, installed the Smith coil and condenser, the Austin timer, the pen cell batteries and related wiring.

Test glides are remembered as being pretty fast and the wing seemed to increase its dihedral a bit during those glides over the tall grass. The maiden powered flight saw the wing's dihedral increase moments after launch - then increase more as speed built up from the Super Atom's thrust - then rapidly the dihedral increased until the wing folded and structurally failed, only seconds after the launch - I was about 10 years old and I knew nothing about changing a good rubber powered design to carry the increased weight of an ignition engine. The crash was complete. I had failed!

About 1970, while at the Nats with my sons, I met Carl Goldberg for the first time. During that brief but ever so cordial conversation, I mentioned my fond memories for the rubber powered 36-inch wingspan Clipper Junior of bygone days. From the conversation, Mr Goldberg kindly sent me a complete set of plans from the long-out-of-production model with the beautiful elliptical curves. I put them away with my few other modeling treasures for over 10 years. Frequently they were taken out and admired - then carefully refolded and put away.

About a year ago, I had the plans out again, and this time I decided I just HAD to have a Clipper Junior flying by radio control. Now, with years of modeling experience behind me, I carefully calculated a total planned weight, chose a 12 to 13-ounce per square foot wing loading, and determined that a simple, 50 percent enlargement of those old rubber powered plans would be just about on target for today's range of .09 to .15 R/C engines. Finished weight was to be between 32 and 36 ounces.

It probably would have been simpler and quicker to just buy a set of plans from John Pond for the big six-foot wingspan original Clipper for gas power, but I lean toward smaller models and smaller engines. At the Toledo show in April 1982, I again spoke with Carl Goldberg and mentioned my scaled-up project. His enthusiastic words of encouragement left me 'all fired up' with the R/C Clipper project which is now complete and presented here.

Many local modelers have enjoyed flying my R/C Clipper. It is simple to build - an .09 to .15 engine with an 8x3 or 9x4 prop is ideal for power, although you could probably use a .19 with a 9x4 prop on backwards to lessen thrust. The R/C Clipper loops well, spiral climbs beautifully, tailspins in both directions from a stall, can be coaxed into snap rolls, and it will even fly inverted for a short distance. It thermals really well here in Florida.

So why not build your own R/C Clipper? You too can build this simple, beautiful, fun-filled old timer, scaled up from yesteryear for today's R/C fun.

One prototype was built by Al Tuttle on Maui, Hawaii. I saw videotapes of it in flight before mine was even finished. Many thanks to Al for the building tips and improvements that are incorporated in the plans. Like 40 years ago, no worded building instructions are needed - just follow the simple plans and use the photos as your guide.

Special gratitude is extended to Carl Goldberg for adding to my many years of fond modelling memories, and for helping make possible the hours of flying fun being enjoyed with the R/C Clipper." 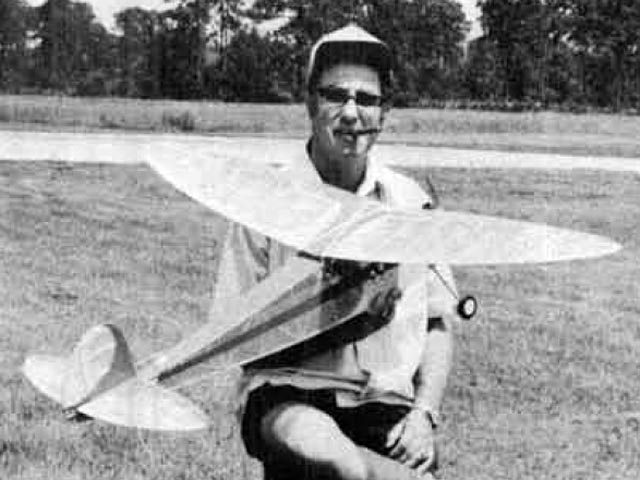