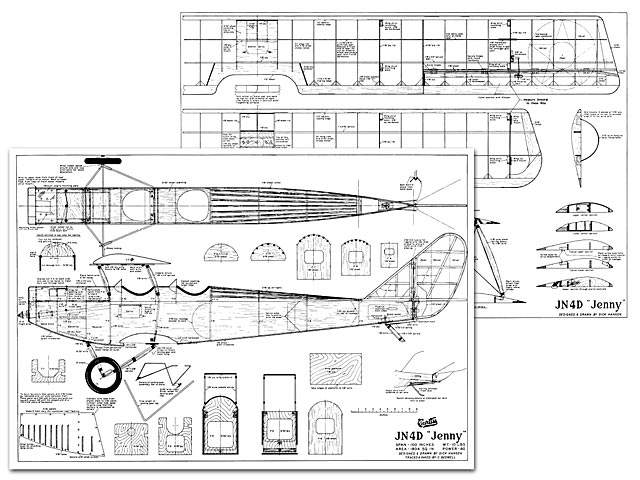 Quote: "Built by the thousands during WWI, this gawky, lumbering trainer became king of the postwar barnstormers. The model captures the in-flight realism of by-gone days. Curtiss JN-4D Jenn, by Dick Hansen.

TO the fledgling birdmen of WWI, the Jenny was what the AT-6 became to thousands of WWII pilots. Designed and built by Glenn Curtiss, it was originally intended as a trainer for the Glenn Curtiss Flying Schools. With the outbreak of WWI, the Jenny was ordered in large numbers by the US Army as well as Great Britain, France and Canada. Of the 7,000 JN-4's built, over 3,000 were the D model. With a wingspan of 43 ft 7 in and length of 27 ft 4 in she was big and cumbersome. Power was an OX-5, V8 90hp engine which yielded top speed of 80 mph. Stalling speed was around 45 mph. Later versions were equipped with the 150 hp Hisso engine which upped performance considerably.

So many were left after the war that the Jenny was greatly favored by the barnstorming and stunt pilots. Cost was just a fraction of what the government had paid, and some came new in the crate. They were still sold as surplus as late as 1927. Just about any airshow that was worth seeing during the 1920s, and up into the late 1930s, had at least one Jenny performing. The last time I saw a pure Jenny perform at an airshow was 1947. She was the star of the show, in my estimation.

Introduction: You will be surprised how much easier a large airplane is to fly and handle on rough ground. The swing in our club is to the larger airplane as we find it more realistic in the air and on the ground. Nothing gathers crowds at the local flying field like a large aircraft, especially a scale job, with two wings - what will they think of next!

The Jenny is a fun airplane, not a super-detailed ship to win contests with, although she does have two trophies to date. It is not hard to build and, in fact, was one of the easiest in a long list of craft including an 8-foot Aeronca Champion, 6-foot Kingcobra, two Astro Hogs, etc. Flying characteristics were better than anticipated. Wind penetration is good. She turns well on ailerons and flies a little faster than expected, probably due to the thin leading edge. Having a simple flat bottom airfoil creates much lift at slow airspeeds and much more lift at higher airspeeds. It should be flown with this in mind.

One drawback of large aircraft is the assembly and disassembly time at the field. This is why the wings are of one-piece construction and only the functional flying wires are included.

Most early biplanes were noted for their short nose moment arms. Not so the Jenny. However, construction should be on the heavy side in the forward section as I had to add a slight amount of dead weight in the nose to balance properly. Do not worry too much about weight, except in the tail as this plane could weigh three pounds more and still fly well. Do make sure there is ample cooling for the engine. It is easy to burn one up, as I did in my Aeronca Champ for lack of adequate venting.

Changes made in the plans over the original model are: straight bottom hatch, aileron horns on bottom of aileron, nylon screw for landing gear and lower wing hold-down, although Dzus fastener or cam-lock can be used. Also the use of a round 8 oz tank rather than an oval one.

The model has been flying for over a year with only one mishap. That was an engine backfire in the air that resulted in a lost prop nut and washer. She is powered by an Enya 60 and guided by a Kraft KP-6 proportional rig. If you are worried about the metal-to-metal connections causing interference in your receiver, you had best re-engineer these for noiseless operation.

Fuselage: Construct entire aircraft with Titebond glue except where noted. Cut fuselage sides from 3/8 sheet and splice where shown. Use 1/16 plywood doubler forward and 1/32 plywood doubler at the tail. Use contact cement for these. Cut out all formers. Bend cabane struts..." 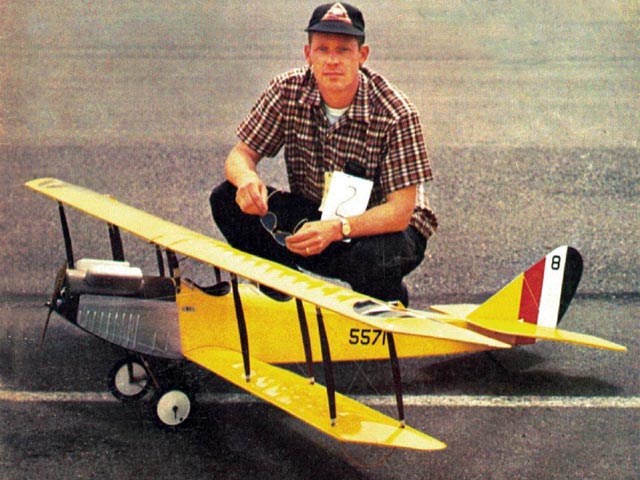